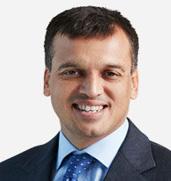 Never say never to anything in life. This fact is proven by the career path of Rajeev Jain, the managing director of Bajaj Finance Ltd. Two brief stints of one year each have shaped his growth and success as the quintessential accounting man who heads the country’s leading private lender. Jain, with help, encouragement, and support from vice-chairman, Sanjiv Bajaj, Jain has transformed a small-sized auto finance player (that also lent to a couple other segments) into one of the fastest growing, diversified lending company in the country, covering as many as 34 customer segments including consumer, SME, and commercial business, and that has with a market capitalization of more than a billion USD. This has helped create, what has been considered by many as, the financial super market in India.

By the time Jain joined Bajaj Finance Ltd., he was already a thoroughbred in the financial sector with stints at GE Capital, ANZ, American Express, and AIG spanning a successful career of 13 years in various positions. And everything he had picked up at each of those multinational companies would stand him in great stead when he started out with Bajaj Finance Ltd., in September 2007.

Here’s a brief peek into his professional journey and what made the man who runs the country go-to lending company.

This should really come as a surprise to most as Jain started off with a Bachelor’s of Commerce (B.Com.) degree – something that is almost looked down upon by the millions of parents and companies even as they ever so crazily after the engineers and the techies and the cream heading towards medicine. So, in that sense Rajeev Jain’s success in a long and diverse career should act as an eye-opener for this set of people apart from of course being a source of inspiration for many from the accounting background.

Of course, it goes without saying that, quite like Jain, they have to have the conviction to follow it up with the necessary efforts and preparation, which in Jain’s case was his management education which he acquired through a Master’s Degree from the TA Pai Management Institute (TAPMI, Manipal) – one of the premier B-Schools of the country, after the prestigious IIMs (Indian Institute of Management).

After graduating out of TAPMI in 1993, Jain took up a management accounting job at Eicher Span Financial where he worked for a year during which he learnt the intricacies of business accounting.

After being well acquainted with the nuances of the financial field in flesh and blood especially accounting and product dynamics, it was time for Jain to explore the canvas further. He joined GE Capital which had just entered the Indian market – more as an offshore support center than as a business branch. In fact, Jain was one of the first ten employees of GE Money in India. While in one way it would baptism by fire as you are part of a very small team entrusted with doing stuff, one would imagine it was also a shot in the arm for the likes of Jain, as there’s so much to be learnt from the global player trying to find its feet in country that had just opened up for the world to come in and transact more business.

As can be expected, it was fertile situation for Jain to put his education, knowledge, and skills to effective use at GE Capital which he did with much success. As the business development manager (south) he was chiefly responsible for the company finding some stability in the country through measures such as starting key southern markets and bringing them to a leading position in the South Indian auto and consumer durable market over the almost 05 year period that he was with the company. His efforts would go on to fetch him an honor form the company with a service excellence award (1997) – reportedly the first service excellence award given to anyone in GE Money, India.

After almost half-a-decade at GE Capital, Jain moved to ANZ Grindlays Bank (India) in late 1998 as the product head of its auto-finance portfolio. This association was brief – it lasted for only about 14 months. However, it along with his first job (at Eicher Span Financial) helped him in a deeper understanding of his chosen field, accounting, and about financial product management.

At the cusp of two millennia, like most multinationals trying to find their feet in a country that held much promise for them especially after its gates had been opened for foreign businesses to ply their trade in, American Express was looking to expand its footprints in India. It was doing so through people who had the proven expertise and understanding of the dynamics of financial business in culturally diverse country like India.

It was a readymade situation for someone like Rajeev Jain, who had been there and done that. So, it was that Jain joined American Express, entrusted with job of business development. He joined AmEx in later 1999 as Business Head (Personal & Business Lending) and worked there till July 2005 – almost six years. During this he successfully led the company’s cards, loans, and wealth management businesses. He had done so well the company honored him in June 2005 (just before moved on to AIG) with the “President Club” award – which is given to very select top performers in American Express worldwide annually.

The long stint with one American finance sector leader was followed by a short one at another. This was as the Deputy Chief Executive Officer (CEO) of the American International Group (AIG). That he was a leader was never in question – Jain had demonstrated his leadership so many times throughout his career so far – at GE Money, ANZ, etc. It was only a matter of time that he was elevated to a leadership role, which was done by AIG. Jain did not disappoint them. He was the architect-in-chief in the endeavor to bring AIG’s consumer business to India. Not only that, Jain also oversaw the acquisition of two companies –one a mortgage finance company, and the other being a consumer finance company) to develop a strong foothold of AIG in India. All this Jain was able to do in just a matter of one year. No mean achievement.

When Sanjiv Bajaj, the younger son of Rahul Bajaj, got the finance business (the auto business going to Rajeev Bajaj), he had many things in mind. Some of them were believed to be so crazy at the time that it seemed like commercial suicide – especially when no one else was doing it the way Sanjiv was claiming possible. That besides, the entry of many multinationals players such as GE Money, ANZ, AIG, and so on, with much expertise and capabilities to ward off any threat or competition from local companies, the odds were heavily stacked against Sanjiv Bajaj’s vision.

More than proving others wrong, Bajaj wanted to see the fruition of his vision for Bajaj Finance Ltd. So, as part of the over strategy to achieve the tough goal he had set for himself, Bajaj brought on-board many proven talents of GE Capital which was, around the time, on its way out of the country. One of them was Rajeev Jain, the Deputy CEO of AIG (back then), who joined the company in the September of 2007 as its CEO.

More than what Jain had accomplished in the past, it was what he held for the company in the future that mattered the most. Being a believer in start-ups because of the enthusiasm and the atmosphere associated with start-ups for creating a growth story, it was evident that the company would now be on an enterprising roll. When he joined, the company had only 3 products in its portfolio – auto, consumer durable and personal computers financing. His enterprising self, coupled with the vision of the company’s vice-chairman meant the company had to soon diversify into other areas and do what no one else is doing, to achieve the goals set.

He started setting tings right – starting with down-sizing the number of branches to 72 from 400 unyielding ones. Of course scaled up back to 475 but in cities and towns with maximum potential for the company. Then it was the technology platform that needed an overhaul – because times were changing and with that consumers around the world were becoming increasingly impatient and poached away by players with service delivery powered latest technologies, and hence becoming scarce. Before this could hit the Indian contemporaries, Jain stepped up and not only brought technological implementation to help speed-up processes but also added a host of products – that would go a long way in the company spreading its wings.

After eight years since he joined, the result is that today the company is financing the needs of consumers with more products that all of its adversaries combined - 34 of them including personal loans, business loans, loan against property and co-branded cards, to name a few. The revenues have soared to Rs. 5,400 crores (from Rs. 400 crore when he took over the mantle), profits to about Rs. 900 crore (from Rs. 47 Cr.), assets under management to Rs. 32, 410 Crores (from 2, 760 Crores), and an assets balance sheet that could put to shame sum of the well know small-sized banks.