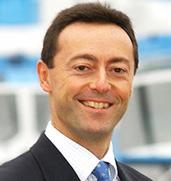 Brégier is perhaps one of the youngest to become CEO of multinational (amongst the self-made or rather those who were not the heirs to an existing fortune and thus making them easily eligible for the post). But it should not be surprise us because Brégier started his career very young, excelled at everything he did, in each of the roles he essayed, and went on to grow both in stature as well as through the ranks of many companies with national and international significance. From starting off as a test engineer at a nuclear plant, then taking up sales managership for an aluminum conglomerate (travelling to the far-east, he was stationed in the Japan facility of the company), to joining government machinery (DRIRE), to becoming the director of economic and financial affairs at the ministry of agriculture – by the time he had accomplished all these, he was barely 28 years!

Born in Dijon in July 1961,Brégiergraduated from the Ecole Polytechnique in 1980, and from the Ecole des Mines in 1983.After achieving the required engineering knowledge at the famed colleges, Brégier joined at the Creys-Malville Superphénix nuclear power stationas a test engineer– at the age of just 22 years or thereabouts.

As if that wasn’t young enough, the very next year he switched gears when he became a sales manager for the French aluminium company, Pechiney’s Japan unit in 1984. After a two year stint in the far-east at the metal conglomerate, Brégier was ready for the next big move in his professional life.

He had barely completed the 5th year of his professional career, when a small window of opportunity came along Brégier’s way that would mark the beginning of his public sector career. It was with DRIRE in Alsace (i.e. the French Ministry of Industry). And what a break that was for Brégier: He joined the ministry in 1986 and by 1989 he had done enough to be elevated to the post of director.

He assumed the role of director of the economic and financial affairs at the Ministry of Agriculture, in the French Government. This was no small leap, for he was only 28 years old but considered worthy enough by the power that be, for the high post. That too in a very crucial ministry. Although it was a deviation from his chosen vocation, Brégier knew pretty as to what it takes to succeed, especially if one wants to make good of one’s education, one has to accept with open arms whatever responsibility comes his or her way.

In his relatively brief career so far, Brégier had moved from being a test engineer in a nuclear plant, to a salesman in the metal manufacturing industry, and then to become director of an important department under a crucial ministry in the French Government.

There must have been something in Brégier that caught the attention of the right people at the right time in each of the stints he had so far. It was no different when he was asked to take up the responsibility of being a technical advisor to the minister of foreign trade (his work in Japan perhaps played its part in this development). As part of this very important role, he was responsible for the multi-national business affairs of the ministry.

As with all his roles so far, this experience would also stand him in good stead – especially propping up his growth trajectory. Expectedly, he was later appointed as the technical advisor to the minister of posts and telecommunications, and made incharge of the industrial and international affairs- a role which he essayed with much élan and consummate ease for the next four years.

Thirty two years is not often the age when you see someone (who is not inheriting) courageous enough to take on the mantle of chairmanship. It is rarer still that you see someone doing so in an area that as sensitive as it can get – defense. But, as we have seen so far, Brégier had always been tenacious and had the uncanny knack of doing the unexpected. At least for his age and coming from the type of business industries he did, this was unknown quantity.

But, as before, Brégier’s quality had prevailed in each one of his professional engagements. Becoming the chairman of two absolutely critical projects in the defense sector would never be easy. Something that the Maitra Defense was always seized of. It was precisely for this reason that they chose a man who had diverse experience, at many levels and, crucially, who understood the sensitivity of the job he was tasked with.

Brégierjoined as chairman of the Apache MAW GIE (co-operation with Dasa) and the Eurodrone GIE (with STN-Atlas) projects – two very high profile projects of Matra Defense. This happened in 1993, and in just three years i.e. in 1996, during which Matra Defense had become Matra BAe Dynamics, Brégier was appointed as the director of stand-off activities (Apache, Scalp EG/Storm Shadow) – two more significant projects for the rechristened entity.

That he was made of top mettle was never in doubt and, moreover, he had proven his capabilities and, that he was quality in more than one senior role. So, his elevation to the top post was never in doubt. It was only a matter of when. Brégier did not have to wait much long to see this becoming a reality. Not that he bothered either – he was known to be the sort who just went about his job, with all the earnestness in the world.

It was early 1998 and board of Matra BAe Dynamics had resolved to make Brégier it Chief Executive Officer. They had nothing to worry about: he had everything they would have looked for in a potential candidate for the top post. Moreover, he had been there, done that (so to say), and excelled in everything to boot.Brégier was not to disappoint them. Nor anyone else. His leadership, vision, and the desire for perfection – constantly - would rub onto everyone he came in contact with: professional or otherwise.

He would go onto demonstrate a lot of those qualities through the course of the next four years or so. His accomplishments, just to name a few, are:

He was chiefly instrumental in the creation of the new European missile systems company called MBDA that came into being from the amalgamation of Aerospatiale Matra (France), British Aerospace (United Kingdom), and Finmeccanica (Italy), in the year 2001 – when he was only into third year as the chief of Matra BAe Dynamics.Needless to say, he was the obvious choice for the top post of the newly formed missile company, MBDA.

As can be expected there many more laurels and plaudits yet for Brégier to be won. The next one being his appointment to the CEO and president of EurocopterGroup in 2003, and the next success as member of the EADS committee in mid-2005 – appointed as head of the EADS’ Eurocopter division.

Around 2006, EADS was reorganizing Airbus – something brought upon by the delays to the A380 project – to build the world’s largest (in terms of passenger capacity) aeroplane. Being the member of the executive committee, Brégier had had enough insights, and therefore, enough impact on the others in the committee. This resulted him being asked to helm its operations and accordingly he was made the chief operating officer (COO) of Airbus. This was huge responsibility on the shoulders of Fabrice Brégieras he was tasked in the October of 2006, along with Louis Gallois, with implementing the Power 8 reorganization plan – the company’s wide-ranging restructuring and change programme.

Brégier being asked to take up such an important assignment – to improve the overall performance of the Airbus Group, apart from also being made responsible for the Executive Committee functions Operations, Engineering and Procurement, and the A350 XWB programme, was a sign of things to come.

He worked tirelessly with all the zeal, wisdom, and energy he could put in for the next 6 years to turn things around, which saw him doing so wonderfully well, finally culminating into his rise to become the CEO of the Airbus in 2012. One of main achievements, apart from everything else he did at Airbus was the successful manufacturing and delivery of the much touted and highly anticipated – A380.

It to Brégier’s credit that the company was able to not only turn things around but also to compete – successfully – with American aeroplane makers, bringing it at par with them, if not above. The company ventured into new areas and partnered with governments to explore new avenues for business improvements as well as growth of the sector.