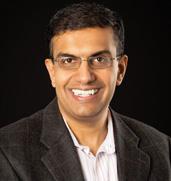 Anil Chakravarty is yet another of those Indian expats who have made it really big in the country of dreams, especially in the technology industry. And, like in most cases, his success is built on the power of his educational excellence, talent, and work experience – performing outstandingly well in a variety of roles and rising through the ranks in every organization where he worked and delivered. He has had an envious journey as a technocrat but his rise to the top position of one of the world’s pioneering technology companies is a shining example of how one can, through talent, dedication, and perseverance (a bit of luck, of course), make it big even in unchartered and alien territories (if it can be said).

When it came to choosing a career defining path, for Chakravarty, it all began in the silicon valley of India, Bengaluru (as it has been re-christened from Bangalore) from where he had his schooling from the National College (Basavangudi, Bengaluru) in 1985. He made the cut to be enrolled for an undergraduate course in Computer Science and Engineering, at the prestigious Indian Institute of Technology, Varanasi (Banaras Hindu University back then) from where he graduated in 1989 - he was a chancellor’s Gold Medalist to boot!

The following year i.e. in 1990, he flew to the U.S. to pursue his Master’s education which he did, at the world renowned Massachusetts Institute of Technology (MIT) where he also did a Ph.D., and received the MIT-Japan Science and Technology Prize for his research.

Chakravarthy started his professional career as a consultant at McKinsey & Company in 1995 – right after finishing his time at MIT. The very fact that he was chosen by one of the world’s leading consulting firms – whose selection criteria and processes are dreaded by most, stands testimony to the obvious talent that Chakravarthy possessed. That the rest of the world would know it only after the young doctoral graduate had gone through the necessary grind at one of the best finishing schools, is the fun part. He worked at the global firm for the next four years specializing in developing e-business and IT transformation strategies, which helped him grow to the position of Engagement Manager before moving on explore other opportunities that came knocking his door.

Chakravarthy then jumped into the technology field which was his chosen subject all along his academic life when he joined technology solutions provider LogicTier Inc. (now defunct) at the turn of the century (2000), assuming the mantle of Vice President, Marketing. This was his first foray into the technology field and that too in a position of high responsibility, which he assumed and delivered for almost 20 months until yet another opportunity in the technology field but which had immense scope for him to experience and work in diverse roles, came his way.

That occurred in the December of 2001 with VeriSign – the internet naming services, infrastructure and a range of security services company, which he joined as director, product management. In this role he was entrusted with overseeing all the product development and product management for enterprise security services – the niche VeriSign catered to and Chakravarthy did not disappoint throughout the 30 months that he served with the company.

The next big step

After equipped himself well with the nitty-gritty of the functioning of the technology industry, Chakravarthy was now raring to take his next big step in his ascent to the top (which would happen after close to a decade of service in multiple leadership roles). Accordingly, in July 2005, he joined Symantec Corporation as Senior Director, Business Operations – a role in which he excelled. This prompted the management to assign him greater responsibility, which they did by making him the Vice President of Business Critical Services with the added responsibility of heading Symantec’s India center.

This was a huge step, considering the fact that there were many thoroughbreds at the company who were any day equally competent, if not more. The fact that Chakravarthy beat them all to it, hints at his caliber which was right spotted and harnessed by Symantec.

The man for multiple-parallel roles

The dual role Chakravarthy assayed for almost two years overseeing a spate of initiatives, which led to his further professional growth. He was subsequently asked to lead Symantec’s global enterprise services business. Added to it, he was also asked to take up the role of Vice President of Symantec’s India Operations – thus proving once again that he was not only open to assuming added work-load but also excelled at it.

It was only logical that having done so much, he inched up the management ladder. The next brief stop for 5 months was as the Senior Vice President of Enterprise Services.

In January 2010, in yet another stint requiring Chakravarthy to work in multiple capacities at the same time, he was made Senior Vice President& General Manager of the SMAG (Storage Foundation, Veritas Cluster Server, FileStore, Command Central, Data Insight) division of Symantec as well as SVP of Product Operations.

The next three years up to September 2013 saw him work in various other senior roles such as SVP of the Storage & Availability Management Group, SVP of the Enterprise Security Group, and Executive Vice President, Information Security (in which capacity he was responsible for overseeing the engineering, product management as well as operations for an extensive product portfolio that included data loss prevention, e-mail, web security (on-premises & cloud), managed services, trust services and authentication, Anil Chakravarthy took the this high-profile role like a duck to water..

He was closing in on a decade of service at Symantec in various roles and capacities, across geographies, delivering success in each of the stints overseeing Symantec’s multiple businesses including Endpoint Protection, Encryption, Storage and High-Availability, Mobile Security and Management, and IndiaProduct Operations as well as Enterprise Global Consulting. Now it was time for him to explore further out in the technology world.

He joined the leading data warehousing company, Informatica in the last quarter of 2013, as the executive vice president, Information Security – being a Certified information Systems Security Professional (CISSP) came in handy to Chakravarthy that helped in due discharge of his duties, in his new avatar, at the new employer. He was subsequently made Executive Vice President and Chief Product Officer.

The new company brought him on board keeping in mind the multi-faceted professional they had come to know had excelled at Symantec for close to a decade. Now, it was time for them to see the fruits of this acquisition which he delivered successfully leading many product development, product management and product marketing initiatives.

Two years later, in August 2015, Anil Chakravarthy rightly climbed to the top post – well almost. He was made Acting Chief Executive Officer. It was just a prelude to the obvious which happened in January2016. It’s just a quarter or so since he was elevated to the post of Chief Executive Officer of Informatica, so early days to be able to comment – he perhaps is still finding his feet. Once he does that, greater challenges as well as opportunities in the face of an ever-changing customer requirements, will give him the chance to put to use all his skills, expertise, and experience gathered over two decades of a varied professional career.

Given his track record, we can safely say that he won’t let anyone down – the company, the employees, the investors, and technology enthusiasts as well – in the age of information (big-data, analytics, etc.).