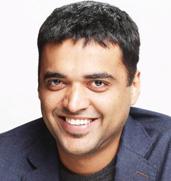 There are quite a few instances in modern industrial history where a seemingly nagging problem experienced by someone led to some invention or the other. The classic case is that of a toilet bowl cleaner, “Harpic” that was invented quite by accident by the Englishman, Harry Pickup. He concocted a chemical to cleanse something – the result was so astonishingly fantastic that it became hot selling commodity in Europe and elsewhere in the world in the twentieth century. If one flips through history, there could yet be many more such instances of “need” being the “mother of invention.” Well Deepinder Goyal didn’t exactly invent something new – he only improvised and customized the concept of restaurant search and discovery with a local flavor for the benefit of his colleagues. What he and his colleague & fellow IITians (Delhi) founded with the primary objective of helping themselves and colleagues has now turned into a full-blown, multi-cultural, multi-geographic service valued at $1 billion (HSBC reported the value to be half of that; strongly refuted by Goyal & Co.) with a business spread across more than a dozen countries.

Hailing from Muktsat (Punjab), Goyal graduated in Mathematics and Computing degree from IIT Delhi in 2005.He joined Bain & Company (New Delhi) as a management consultant. He was joined there by his fellow IITian, Pankaj Chaddah.

It was at Bain & Co. that the idea for starting a restaurant search service germinated in Goyal & Chaddah’s mind. It so happened that in the company cafeteria, there were people (employees, etc.,) scrambling to get hold of a menu to place their orders. Consequently, it would take hours to get orders placed and readied. This was a constant source of frustration for the IITians as indeed it was for many others. The idea of finding menu’s online sounded like a way out of this lunch-time mess.

So, the two of them scanned restaurant menus and uploaded them on a website where employees of Bain & Co. could use for searching stuff. They called it “Foodiebay.” The site received tremendous response thus encouraging Goyal and Chaddah to think of taking it public.

Sensing that they had, by default, creating the basis for a golden business opportunity, the duo decided to launch it publically so that many more can use it. And thus, it was launched in 2008 listing restaurants in Delhi NCR, soon branching out to Kolkata and then Mumbai. The response to the site was immense – evident from the fact that, by 2010, it was named as among the top 25 internet companies in India (SmartTechie magazine).

It was renamed to “Zomato” in November 2010 which added to the distinct identity of the service. By now, it had done enough to generate interest among many VCs and funders who saw potential in this new type of service for the country and funding started flowing in slowly. Deepinder & Pankaj also roped in their college mate Gunjan Patidar to help take the company to the next level.

Info Edge (India), the parent company of online job portal, Naurkri.com, was the first to invest with $1 million. Goyal had done enough to gain further confidence of the investors (Info Edge) to be able to garner yet another round of funding from them in September 2011. This time round, He succeeded in getting $3.7 million from Info Edge which continued to invest each year as Zomato continued to expand and gain traction by adding more cities and more restaurants that were listed.

The services were also improved with time - providing in-depth information to users about restaurants and events (e.g. menu cards, contact details, pictures, directions, rating and reviews) & helping them makeinformed decisions visi-a-vis their food outing. Users could also seek (see) the opinions of restaurants that they are planning to visit,through the reviews written by people who have already visited the place.

Much of Zomato’s story of growth revolves round the passion and aggression of its CEO, which is reflected in the spate of acquisitions that the company in countries outside India.He harnessed the resources and funding at Zomato’s disposal to acquire local listing site (similar to Zomato) in respective countries (New Zealand, England, Turkey, Portugal, Indonesia, Spain, Czech Republic, Slovakia, Poland, Italy, &UAE) and integrated the same with Zomato, thus expanding into hereto unchartered areas with consummate ease.

With this, users can look for every piece of information they are looking for about restaurants, such as website that will menus, pictures, locations, ratings, reviews, to help them make informed and faster decisions.

Concerns were raised by many users and investors alike when an Indian security researcher hacked the zomato site and, ostensibly, gained access to personal information such as phone, email, and other details of about 62 million users. But, Deepinder and team ensured that the issue was resolved in 2 days.

If an enterprise wants to really help all types of people regardless of where they are accessing the information from, and in the process monetize, then it really has to be omni-present. Be it a website, smart-phones or the print media. With this in mind, Deepinder set-out and implemented the service on smart-phones regardless of the OS, and then, in 2012, extended the service to the print version by coming up with a restaurant guide in partnership with Citibank – calling it Citibank Zomato Restaurant Guide.

Start-ups are inherently very aggressive in nature. They have to be – in their innovation, in their delivery, and in everything they do and, therefore, they have to have undefined systems in place that follow no specific rules. Because, for a start-up not much is pre-defined and systemized for others to follow. Everyone involved is looking to find ways in which the company can move to the next level from the ground up – which means the work-place could a very demanding place. And, so it is with Deepinder’s Zomato – an absolutely unrelenting, demanding, and fast-paced work environment where the lesser or those who have worked in the organized sector would find it difficult to align with.

Thus, quite a few employees who left the company complained of this obvious discomfort – which was not to their liking. This was followed by criticism from many – both within and without. Deepinder, however, sticks to his guns and says, there is nothing wrong in expecting more from employees – always.

Despite the criticism, which may be justified to some extent, Deepinder and Company have the backing, support, and services of many like-minded workaholics in the company.

As brash as it can get

If one thought that Travis Kalanick (the outspoken founder & CEO of taxi-hailing service, Uber) was brash- especially when it came to handling people (on the other side of benches) and criticism, then wait until you have heard from Deepinder – who is not only brash (as reported from the employee rebuttal episode in the media) but is also as to-the-face as it can get. If his response to employee dissention was something not welcome by some standards, then his email right after culling his work-force – detailing the decline in the sales (and thus, revenues) and mentioning the reason for the same being the underperformance of zomato’s sales team, was even harsher. It went public as well as viral.

In any case, Deepinder and company continue to march on and grow – despite such not-so-friendly happenings as indeed reports of under-valuation from HSBS. The tenacity of the man has always held sway over how the company functioned and it will continue to do so, heralding the company to the status of the no.2 start-up in the country.