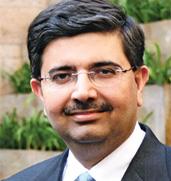 One of the very few self-made billionaires India (or may be even the world has seen) in a generation or two, Uday Kotak comes across as a very different entrepreneur from the rest of his ilk. He still yearns for a society that has its roots in the earthy fabric of joint families the country past is associated with, while many others seemingly look towards break-neck speed of modernization even if it means a very heavy cost to pay.

That said, he is a businessman to the core, knowing very well his business inside-out like very few do. He knows the pulse of the market; he is often well seized of opportunities hidden in the midst of uncertainty and is willing to take calculated risks – some of the traits of successful businessmen in the history of the industrial era. This scion of a traditional Gujrati cotton trading family, through sheer courage of conviction about what’s to be made of his life, his reading of the market, and confidence in his abilities and, of course, the burning desire to do something different than what his family had been doing, all conjured to make one hell of a type of entrepreneur, the likes of which the world had seen very few in a quite long period. Today, he is not only one of the richest people in India and the world – which fact is just a number and purely incidental – if one has seen the philanthropic work he is associated with, and the thoughts he has about what kind of society, people, the living atmosphere we should be living in are taken into account.

Born into a family of cotton traders, Uday Kotak was - one can say – lucky enough to be born and brought up in Mumbai – the city of dreams, as far as India is concerned. This serendipitous happening could not have been possible but for his father being forced to migrate to the commercial capital of India (from Karachi – the commercial capital of Pakistan) owing to the partition of the country.

As if the air of Mumbai wasn’t enough to sow the seeds of entrepreneurism in young Uday Kotak, his family – a lot consisting of a full 60 people living under a single roof with a common kitchen. The traditional milieu that he was surrounded by helped shape a lot of the thinking that Kotak was to exhibit in his later life.

He went to the Hindi Vidya Bhavan School (Mumbai), followed it up with a Bachelor’s degree (from Sydenham College) and a Master’s in business management from the famed Jamnalal Bajaj Institute of Business Management (Mumbai).

Apparently, Kotak seemed to have picked to important skills while at school – one, cricket and the other being a keen interest towards mathematics. Accordingly, he did well enough in both – going on to play cricket for his school, becoming the team’s captain, and then pursuing a career that had more or less everything math about it.

At age 20, he had to let go off cricket for good after being hit by the cricket ball on the head (back then there was no proper head-gear for protection) and was operated upon. This lead the family to decide that enough was enough – and that was the end of a potential cricketing talent’s career.

The other inspiring or instigating (as his family would perhaps have felt back then), was a growing concern in young Kotak that his family business would soon go out of fashion – rendering his future aspirations paralyzed. This spurred in him a desire to do something different within the confines of the definition of business.

Having made up his mind that he would not venture into the field which his family had been plying its trade in, it now that phase of Kotak’s life where he had to decide or take a call on what really needs to be made out of his life. His deep interest in mathematics and the business acumen that he inherited and perhaps even honed while at home in the midst of a business family, made it relatively easy for him to decide that it would have to do something with the financial services. That is perhaps why he turned down a lucrative job offer from a well known multi-national company (reportedly Hindustan Unilever) which right opposite to the college he was doing his MBA from.

That relationships matter and the trust built into them will go a long way in shaping many things in your life Kotak had known very well even as he was still in the business school. He was looking for opportunities to break and make good of any of them. One such opportunity presented itself – of course not without the shrewd eye of Kotak spotting it after a thorough research and study of the same.

One of his college mates at Jamnalal Bajaj had joined a Tata enterprise called Nelco (National radio, & electronics Company) and through him he came to know that owing to the payment policy of the company, its suppliers were often in cash-crunches until the payment was released after 90 days since the invoice was raised. This played havoc with their overall business cycle – as indeed with their business relationship with Nelco. To infuse liquidity, banks looked like the only option to bail them out. But that was a costly affair – as banks would take deposits at 6% returns and lend at a whopping 17% interest rates. Kotak saw this as an opportunity opening up and, after counselling all his family members and friends into investing in his venture – which would give them double the returns of what they would otherwise get by saving the money in banks.

Thus, he started his trade-finance company which would later deal in bill discounting, and Nelco being the 1st customer of the company. The business plan of lending Nelco (working capital) at interest rates lower than the banks worked well and it brought in apart from the confidence, good revenues, allowing Kotak to explore other areas within the financial services realm, which he did like very few had before him or ever since.

In 1986, he established the company, Kotak Mahindra Finance Ltd., with a capital of 3 million (INR) with a 50% stake and the rest of it comprising family and friends, including Anand Mahindra (of Mahindra & Mahindra) who invested a good enough chunk of the remaining 50%, thus prompting Kotak to name the company Kotak Mahindra. This was the beginning of a series of business within the financial industry and allied segments.

The following year, in 1987, the company ventured into the lease and hire-purchase market and succeeded. Then his Midas touch was in full show in 1989 when the company entered into auto-finance. It was again Kotak understanding the pulse of the market and the customers (savers) needs that helped in is assessing the exact need (product) of the market. Back then, Citibank was the only institution that dealt with auto-finance, with many terms & conditions. This, coupled with the fact that cars were in short supply leading to long waiting periods. So, the opportunity was truly utilized by Kotak with a master-stroke: the company bought (after booking) Maruti-Suzuki vehicles in advance and delivered the same to customers who borrowed money from them – of course conditions being same as Citi’s. This did the trick yet again.

Up, up, and up only…thereafter

He has never looked backed since and achieved much success with each of his ventures – be it FICOM acquisition (marketing network) in 1991, funds syndication business (1992), went public (1992), securities (1995), information distribution (Matrix 1996), mutual funds (1998), life insurance (2000), banking (2003), pension fund (2008), or commodities exchange(2010) – Uday Kotak has ensured success for each of the companies or entities under his supervision and control.

Today, Kotak Mahindra Bank is one of the largest private sector banks in the world with revenue of $1.6 billion USD employing a workforce of around 30,000 and registered an annual return of 48% compounded.

He is very passionate about making the society, especially the youngster of underprivileged people, acquire life-skills through proper education and training and hence, contributes a lot of funds for such initiatives.