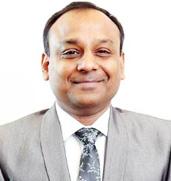 Dinesh Agarwal is so unassuming yet so effective in everything he does. His engineering background coupled with the stints at industry majors seem to have helped shape the man’s functioning as a business leader, and quite a successful one at that!

If one is looking for inspiration on entrepreneurship, then you don’t have to look beyond Dinesh Agarwal. He combined his education, professional experience, ground realities, a window of opportunity in that reality, courage of conviction, and a flair matching that, to build the world’s second largest online market place that has more than 6 lakh online catalogues and lists 50 lakh products in 75,000 product categories generating 32 million visits per month (about 5.5 million of them unique) with its members doing a business of about $2 billion USD every year.

Born in 1969 into a traditional Marwari business family, Agarwal had his schooling from Lucknow (U.P). He was a gold medalist in the B.Tech degree that he earned from the Harcourt Butler Technological Institute, Kanpur (U.P). These were signs enough that genius was about to be unearthed.

Agarwal had stints with many noted organizations beginning as a software engineer with CMC Ltd.,and C-DOT Alcatel, and before joining HCL Technologies in 1992 as a Senior System Analyst part of which included working in the United States (for HCL America).

He had worked and learned enough of the software industry to be able to clearly understand the intricacies of the field and, importantly, identify potential opportunities. However, it was his stint with HCL America that determined his future.

Coming from a predominantly business family, the signs were clear that there is a businessman in Agarwal. When he would manifest himself was just a function of time.

The time appeared to have arrived when he was increasingly driven towards the internet and its capabilities. There was immense potential in this technology that much Agarwal was very convinced of – being a software engineer himself.

He looked back at his homeland and reckoned there much promise in harnessing the benefits of this technology in the country where millions of SMEs (Small & Medium scale Enterprises) seemed to have lacked proper marketing that left them largely disconnected with their potential customers living elsewhere in the country and the world.

With that vision in mind and clarity of thought so often demonstrated by successful entrepreneurs, Dinesh returned to India in 1996 and started building websites for local SMEs through the company called InterMesh and operating from Delhi. One of them (in fact the first) was Nirula’s – India’s oldest fast food restaurant chain.

Building websites was doing OK but Agarwal had many ideas as part of his larger vision for India’s SMEs making best use of the internet. Therefore, started IndiaMart which would initially only list the websites previously built or being built by his company InterMesh. This soon proved to be a good model.

However, its efficacy could only be gauged in real terms if some real business activity happened, which did when it started acting as a marketplace for exports and imports. Although it did cater to the Indian SMEs too, the company’s listings were largely the EXIM related – almost 80% of it. For his company to grow, Agarwal realized this had to be turned around. How he did that is quite interesting if not fascinating. The online marketplace adopted the offline marketing approach to mobilize and bring on board the thousands of SMEs. It was arguably the toughest task. In fact, it still remains a challenge in the overall marketing mix.

Agarwal and his team went from door-to-door of each SME that they thought had the scope for growth through their marketplace and tried to convince them in every which way. It wasn’t an easy task by any means. The handicraft guys, the artisans, and so many others didn’t really buy into a concept like that. They had virtually not heard of something like it. In fact, those were the early days of the internet in the country and only an infinitesimal amount of people of the country knew about it, much less its uses and the potential it held for them and their businesses.

But Agarwal the thorough-bred and the hard-nut to crack, worked his way into their minds and did enough make them understand the fruits of the online markets and IndiaMART’s role in that, which did enough to secure their willingness to explore. The result was that everyone realized the importance of internet – the fact that with the marketplace model, it broke the geographical boundaries and helped bring the sellers and buyers closer in a manner that was not hard on their pockets.

By June 2010, the marketplace had about 7, 00,000 registered members and nearly 5 million global buyers across myriad verticals and industry domains. It was helping businesses, mainly SMEs to do transactions through the leads generated by IndiaMART.com encompassing about 20,000 product categories and a wide range of product listings - from apparels and fashion accessories, medical and scientific equipments, to home décor, gifts & crafts, auto components & spare parts, to engineering and industrial products – it had everything. It acted as a great bargain for bulk buyers from the manufacturing and export-oriented industries, thus stamping its mark as the pioneering B2B marketplace of the country.

Despite the initial unwelcome response to the idea, the company had always been a profit making company – although only marginally but still profitable unlike most internet companies.

However, Agarwal had his shares of failures as well – largely as a result of the business experiments he embarked upon. The first of those to miss the mark was the auto.indiamart.com platform – which was launched in 1999 with the aim of providing the latest happenings in the auto industry. It wasn’t well received and thus, went down pretty insignificantly.

Then, during the boom around the turn of the century, Agarwal got interested in the auctions space – with a view to give his customers a full-cycle solution, but the market hadn’t matured enough for something like the eBay model, and the idea fell-flat. He didn’t relent and went on to create sites on handicrafts, health, and auto - all of which made a dent into his cash reserves.

Looking up, up, and up – IndiaMART

With the venture showing promise as well as delivering on most counts, Agarwal felt the need to expand. Venture Capitalists were willing to invest but wanted a rate or success and growth that was unheard of in the country – this despite the fact that all through its journey IndiaMART had grown 45%-50% YoY.

Nonetheless, Agarwal continues with his success story with the paid customer base going up to 45,000 from 15000 in a mere two years with the revenue per paid customer pegged at $1000 per year.

Although there have been ups and downs, Agarwal has moulded himself will to attune to the changing requirements of the markets, especially in the face of much competition. But, he marches on without any doubt that his company is duly shielded owing to the sheer size of the audience – bulk of which is between Rs. 2 crore and Rs.20 crore, which kind of gives him the additional edge over the others.

Apart from the offline marketing and brand awareness campaigns, Agarwal and team do enough to keep the company in the minds of the SMEs and all concerned through a spate of activities such as trade fairs, conventions, etc., at regular frequencies and on top of it, Agarwal himself, being the hands-on CEO he is, keeps on calling or connecting with customers (buyers & sellers) randomly – just to check on the health of the relationship. This, he hopes, can change things for the company in terms of the buying & selling. Currently 20% of it is happening within his community and he feels that it can go as high as 50%. Some confidence that!