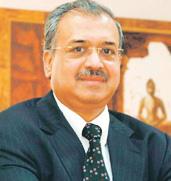 Dilip Shanghvi stands out from amongst the crowd of scores of businessmen who have made it big. For he did it with the barest possible investment – that too borrowed from his father , did it in a field which was not in line with his chosen field of education nor was manufacturing drugs something that any parent would want one to take up in the early days of the Indian emergency but he did encouraged by his father. He started small, payed his bets smartly with the acquisition of companies and then turned them around into profit making units – along the way making Sun Pharma one of the largest generic pharmaceutical drug maker in the world. What’s more he recently beat the longest-richest man in India – Mukesh Ambani- to the top spot. Not that he is any proud of it as he thinks money is only incidental to him. He’d be more satisfied if he acquired some more less than desirable companies and helped change their fortunes and that of the employees of those companies.

Well one would like to think it is – with so many Gujarati businessmen succeeding. However, Dilip Shanghvi was born into a Gujarati business family in the small town of Amreli (Gujarat) but his upbringing was far across in Kolkata (Calcutta as it was known back then) in the eastern state of West Bengal. The place was the hub of a lot of industrial and business activity where his father was a trader of bulk pharma products.

Shanghvi had his schooling from the J J Ajmera High School (Kolkata) and went to complete his Bachelor of Commerce degree from the Bhawanipur Education Society College (University of Calcutta).

The father was encouraging enough and lent him a sum of INR 10,000 (Ten Thousands) – which was, one can say, good enough for a father to give his son to have some fun and indulgence, but very paltry if one was looking to establish a business entity – a manufacturing unit at that(regardless of the size).

Being very shrewd, perhaps the father-son duo deemed it fit to first test the waters and then go full blown or whatever.

Shanghvi started a unit in Vapi (which was notorious for being one of the most polluted cities in the country) and made a handful of psychiatry products. He has a small team consisting of two marketers trying to sell the five products that the company made.

Soon he branched out and started producing cardio products.

The real break and the flight thereafter

Shanghvi had always had an eye for opportunities. While he continued with manufacturing and marketing the psychiatry and cardio products which business spread across the country in a mere four years since inception, he would constantly look out for companies that may not be doing great presently but which held great promise. This was one quality that would go on to help him build his empire that today extends beyond the seven seas!

He started to export from 1989 and has never looked since. But first major break to get into the big league came when acquired the Ahmednagar(Maharashtra) based Knoll Pharma in 1991 by which time the sales operations of Sun Pharma had expanded to about 24 countries.

When he bought Knoll Pharma many including friends & family thought that may be it wasn’t a good deal but Shanghvi proved them all wrong by turning it into a profit making entity in no time.

This was the beginning of a spate of acquisitions both nationally and internationally and companies of all sizes – which didn’t matter to Shanghvi as long as the ones he was acquiring had the fundamentals right. Even in cases where it they weren’t, it was Shanghvi’s conviction in his own abilities to turn it over that held sway on most decisions and he has done well.

He has made about 19 acquisition in the two decades post his first one (Knoll Pharma). Quite few of them were shocking to many from the industry and outside of it. For the companies he bought were in the red and were almost down-and-out. If sanity were to rule, then no one would even risk a thought of looking at them, much less buying them.

But Shanghvi is made of a different fabric altogether – something that is manifest in the man’s overall disposition – his working style, his thinking, his approach to business, his away-from-the-public glare functioning, and above all, his leadership style – which is not like a leader but more of a manager, all of these so subtly let him do the work, and do it at his full potential and come up trumps every time. Remarkable isn’t it?

For Shanghvi, on the face of it, it might look like the ‘high-risk, high-returns’ mantra that seems to have worked fine. But, if one delved deeper, one would realise that the man doesn’t shoot in the dark. He has an uncanny ability to see things beyond the ordinary, things that we common-folk miss so inadvertently but not Shanghvi. The thorough-bred knows his business and also the markets – inside-out. Therefore, when he bought two US companies which were more or less down in the dumps, it looked like an error of judgement. But, Shanghvi took it as a personal challenge to set things right at the company to bring them to profitability.

In fact, he was so enterprising and daring that right after buying Knoll in 1996 by which time one would think he would be still grappling with making things right at Knoll, he went on to buy Caraco Pharma – a loss-making American company - in 1997. But it wasn’t acquiring one more company – it was more to do with entering the US market – which he did by turning around the fortunes of the company in no time. Not only that, he also achieved the goal of a strong US presence with the company today recording 60% of its revenues from the US market alone.

After having tasted success with two acquisition and orchestrated their turn-around, Shanghvi had now found the new mantra – “grow, buy, grow” which he continued to do. One of them was an Israeli company, Taro Pharma, which gave his company a strong presence in Israel, Canada and of course, the US.

Feather in the cap?

His acquisition spree continued with each year and the company grew to be the fifth largest in the global generic drugs space. He recently bought the troubled India contemporary – Ranbaxy labs (from Japan’s Daiichi Sankyo) for a reported $4 billion USD. Most think, with his proven track record and ability, Shanghvi will be able to turn it over and bring it back to the good old glory days. Whether or not he will, only time will tell. But, one can be rest assured that he will leave no stone unturned to see that his biggest acquisition so far – or should one say, his biggest gamble, is made good off.

Shanghvi is married to Vibha Shanghvi and has a son, Aalok Shanghvi who has also joined him in running the company working as a senior general manager in Sun Pharma’s international marketing unit.

Shanghvi started an investment wing, called Dilip Shanghvi Family & Associated, which invested a reported Rs.1,800 crore in the wind energy major, Suzlon Energy. He serves as the MD and Chairman of Sun Pharmaceutical Advanced Research Company and the Shantilal Shanghvi Foundation,reported to be the first ever pure-R&D Company enlisted with Indian stock exchanges. He has also applied with RBI for a payments bank.

He may not like to be tagged as the richest Indian today surpassing Mukesh Ambani, but the fact is he is not only India’s richest but also figures in the Forbes list of world’s top billionaires. True inspiration on how one can make a life out of even nothing if one has the will, courage of conviction, and an enterprising spirit to go with it.