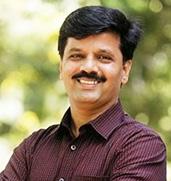 He has no formal management education from any renowned B-School (or for that matter any at all), he has no technology education to back up his aspirations; in fact, he didn’t even go as far as higher secondary. Nor did he have someone very inspirational who encouraged him or one whom he could look up to. He even had the no access easy education as his family subsisted on a modest income by his father. Life, in general, could not have been any difficult for a youngster. Even worse, he could fallen prey to vices of the big bad world. But, Kailash Katkar, with the humblest of beginnings that you will have ever seen or heard of, is testimony to the fact that it is one’s will and determination to do something that will overcome all constraints and obstacles. And if sprinkle a bit of entrepreneurialism to it, then there’s no other concoction for success like that.

Today, Katkar vision and skills have helped create a sort of business empire that is – in the face of some strong global competitors, and many adversities - as his LinkedIn profile proudly says “spread over 60 countries worldwide. Quick Heal Technologies was founded in the year 1993. It is one of the pioneers of Research and Development of IT security solutions in India, has 31 branch offices in India and global offices in Japan, USA, Kenya and Dubai.” And no one can deny him the right to be so in awe of his brainchild.

Katkar, born into a Maharashtrian family in a small village at Rahimatpur (Maharashtra), grew up in Pune where his father worked as a machine setter in Philips (and his mother was a homemaker). Katkar wasn’t great at academics- reason being he was never too inclined about studies. He could barely complete his matriculation in 1985. And that was it. He put aside the thought of any further education and set out to do something else – what exactly he did not know, although he was always fascinated by technical things and their functioning.

He had to support his father to support the family. There was only one way of doing it – taking up whatever job came his way. Katkar was fortunate that he got a job that ensured that his interest in something was sustained. It was at a local radio and calculator repair shop. His employer was a progressive thinking man and, accordingly, sent young Katkar to Mumbai for two months to get well trained in the nuances of the field of electronics. He returned to Pune to work for the same employer for Rs.1,500/- a month. Over the next 5 years, he mastered the art of repairing desktop electric calculators, the then popular office gadgets such as the Facet adding machines, and ledger posting machines, besides also picking up but up enough accounting skills to handle the books for his employer.

All this made him confident enough to think of setting up his own repair business.

Around 1990 – 5 years after he quit education for good to learn the lessons of life and equip himself with some life-skills, he leased out a small 100 sq.ft. office in Pune that was involved primarily in calculator repairs. To be able to do that, he put in the Rs.15,000 - he had so painstakingly saved for half a decade or so. But it was all worth it in the end- as we will see later in this write-up.

Apparently the first year’s turnover (for an entity like his) was decent enough – at Rs.45, 000. But, Katkar wasn’t satisfied with the progress of his business.

Owing to the less than desirable return from his calculator repair shop, Katkar was looking at ways for course correction or diversify even. A man so aware and enterprising was bound to not miss the software boom taking shape around the same period. He realised that this could be one way of branching out and taking his business to the next level. But he wasn’t a computer literate. To overcome the handicap, he started reading about computer hardware and then enrolled for a computer management course (1991-91) so as to equip himself with at least the basics of computer applications.

Although he wasn’t keen on formal education, it has to be noted that he was a very quick learner. Therefore, after ensuring that he equipped himself sufficiently about the nitty-gritty of computers and applications, he started a company called CAT Computers in 1993 that provided maintenance services.

It had a few annual maintenance contracts from companies for repairing printers and printer heads. But it was generally difficult to win contracts from customers. Eventually, however, his company was handling similar contracts for computers too. That kind of allowed him to win some contracts.

His experience of repairing ledger posting and facet machines came in handy while understanding the virus related problems. Since, small companies could not afford the licenses of anti-virus software available in the market at the time, Katkar and his company got those contracts.

Around the same time, his brother Sanjay, upon insistence and guidance by this Kailash, came up with an anti-virus solution – along with some college friends of his. They named it Quick Heal.

While the Katkar new solution was a welcome thing, Katkar had to continue running his annual maintenance contracts business for about 5 years (up until 1999) both to sustain as well as help fund their anti-virus business because it was only making about 5% profits on a revenue of one million (INR) by 1996.

Things started to look up with the turn of the millennium and through the first decade, the company had registered a whopping 100% growth every year (but as expected that was bound to stabilize and it has now consolidated at around 25% a year).

But all this fantastic growth story didn’t happen by itself. The Katkar brothers had to do some business rejig, smart moves, and also capture opportunities that was non-existent because most people didn’t trust Indian software products. (In fact, even today, not many may not know that Quick Heal is an Indian company).

There were value-adds, distribution of the product through friends and acquaintances who were in the computer maintenance field, keeping the software updates smaller in size in view of the bandwidth issuesmay users face and, above all, they priced it at only Rs.500 per license. That was the biggest clincher for other contemporary products were much costlier.

Another USP of Quick Heal (as per Katkar himself) is that it doesn’t ask the user to delete an infected file, but instead cleans it to retain the data – this was done keeping in mind the fact that, unlike in the US or elsewhere, people in India, generally, don’t back up their files.

Valued at around Rs225 Crore (INR), this pioneer of research and development of IT security solutions (in India) operates in 60 countries, with 31 offices in India and also offices in Japan, USA, Kenya, and Dubai.