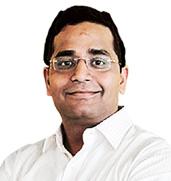 We’ve seen or heard of many rags to riches stories of entrepreneurs who started off with modest beginnings but this one is slightly different. In that, while most others were forced into such beginnings, Vijay Shekhar Sharma’s were those out of choice. Well perhaps chosen not by him but his father – who lived a principled life, which meant, the family just about subsisted leaving very little room for a life that would count as comfortable, much less for indulgences. Whether or not Sharma was seized of this situation so early in his life, except the fact that his father wouldn’t do tuitions over and beyond the normal course, is debatable but what is not is that the child prodigy was always ahead time equipped with an enterprising spirit.

He finished his higher secondary when he was barely 14 years of age, which course otherwise would take 3 more years. What’s more astonishing is that he was able to enrol for an engineering course at a renowned university at the age of 15! (Which is like high school for most Indians as well as for many elsewhere in the world).

Then he didn’t let neither his humble background, his struggles with the English language (Hindi had been his medium of education all along his life up until college) and, consequently, his falling grades, to bog him down. For he had always been very determined and focused.

It were his entrepreneurial spirit, never-say-die attitude, and a conviction in his abilities that helped him succeed against all odds and show way for many other aspiring young people.

Sharma was born in a village just outside the town Aligarh. His father was a school-teacher who led a principled life and imbibed the same in his children. Call it genes or whatever but young Sharma was topper throughout his childhood. He stood first at every major stage of school education – something that allowed him to seek more challenging things and get the better of them, as he would manifest in most of his endeavours in later life as an entrepreneur.

He completed his higher education when he was all of just fourteen years. As if that wasn’t a big achievement in itself, he got enrolled for an engineering course at the Delhi College of Engineering at the tender age of fifteen years.

Sharma had his school education in the Hindi medium. This would prove to be a big obstacle at college where, for obvious reasons, the tuitions were in the English language. It handicapped his ability to learn and understand properly and, therefore, to reproduce the results he wanted. This dented his confidence and insecurity started to creep in slowly – all of which concocted to a slump in his grades as he relegated to the back benches from being a front-bencher (pointing to a cliché in the Indian school system that front-benchers were good students and the back-benchers were poor in studies).

They say success is how high you bounce once you hit the ground. Sharma had already hit rock-bottom – at least per his very high standards. From a layman’s perspective he had nothing to lose. But, for Sharma it was not. He knew he had to buckle up and gather himself to prove to the world what he was made of. To overcome language problem he started reading books and magazines – English and Hindi versions of the same parallelly to understand the contexts better and get a hold of the language. This helped greatly and he soon picked up himself from the lows to up his form in studies and passed out of college in 1998. Apparently, Yahoo! was his inspiration and perhaps that is what took him towards software therefore, while he was still in college he started the website indiasite.net and sold it two years later for $1 million.

To take his career path forward, soon after graduating out, he joined River Run Software Group in the business development department where he lasted for about a year.

But he wanted to make good of his engineering studies so he joined the Intersolutions India Pvt Ltd as technical Team member and worked there for another year. He also joined the India Today Group Online as the technical head – the stint lasted as long as the one with Intersolutions ending in 2000.

In the year 2000, he founded One97 Communications which would eventually become the parent company of his most successful venture – Paytm.

Somewhere along the line he also worked as the CTO of a start-up called Startec Global Systems, India for a year.

Having overcome the language barrier, one would think it would be a piece of cake for a whiz like Sharma. But, life had other things in store for the young man. Things weren’t moving as he had desired because just around the time he was about to launch his entrepreneurial life big-time, the dot.com bubble had burst and life had suddenly become more difficult than ever before. He had to skip meals, take to foot often and walk miles from one place to another – just so he saved enough. All the suffering didn’t shatter his confidence. It only made him all the more determined than ever before to go after his dreams and he persisted with One97 which offered mobile content like news, cricket scores, ringtones, jokes and exam results.

Life had taught quite a few lessons for the young man – for after all the work-stints and shot at business, he was still only 30 years by the time he launched Paytm.

Sharma founded Paytm in 2010 – as mobile wallet. The idea was simple but implementation required great effort from everyone involved – primarily in winning the trust of the customer as well as the One97 board of directors. Therefore, it was a hard sell for him with the board which didn’t believe in the idea. He put his stake in the company (1%) to trade his idea as an insulation if it failed. This was enough to win them over. Next was the all-important customer.

For that, even before he offered wallet services, Sharma started the customer support for the service address queries from people who could potentially be customer or users who would buy stuff from vendors through Paytm. Over 30% of the company's campaign budget is invested in building trust with the customer.The strategy worked and people slowly but surely enough took to Paytm and, as Sharma had envisaged, turned it into their mobile wallets.

Obviously, in a field where there were more than 30 competitors, one would need to have differentiators to be able to attract as well as hold on to users availing the services.

More than his engineering education and his rock-solid determination, one would imagine it was his deep business acumen that helped Paytm become what it is today.

Apart from a dedicated customer care, Sharma enhanced the user experience of the service so that users had a seamless experience while all along improving the quality of services delivered.

Then, he could not make Paytm as a sheep in a herd – doing what others did. He had to have some bench-marking that would let Paytm paly niche.Paytm had enough brand equity to ensure that the company followed some smart business practices. It doesn’t own any warehouses, it only partners with sellers and logistics providers to ensure the services / items are delivered to the customer on time.

Also, there is no free-shipping, which means either the buyer has to pay or the seller has to take a cut. This ensures no pilferage in margins or revenues – unlike other ecommerce portals and market-places – whose GMV is more but profit realization are nil. In fact very few companies are in the green – surviving mostly on the several rounds of funding in the hope that they will make hay in the future.

On the other hand, Paytm has had only one round of funding - of $100 million (including himself, SAIF partners, Alipay, & Ratan Tata) and uses it to improve the services while still maintaining a decent profit margin.

Perhaps Paytm is the only Indian company to have broken-even and go on to earn profits. Paytm continues to lead the pack with smart offerings and incentives for users in lieu of using the service such as discounts, cash-back, etc., but all of them with a rider – fair enough as everyone has a right to protect their interests.

Sharma has seen the company grow into a $3 billion dollar pioneer in the country and continues to herald it even in the face of contenders and pretenders as well. Its mobile-first marketplace has over 50,000 merchants and processing over 75 million orders a month.

But, he also knows that the company is made of people – it is the talent as work that is making it possible for him to run the company successfully.So, as mark of respect for their hard work, as also the fact that not all hard working people are as successful as he is, Sharma has distributed a good chunk of the money from the shares he owns.

He also continues to fund in interesting and promising start-ups through his funding arm – One97 Mobility Fund that he started in 2010.