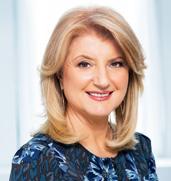 ‘Get more sleep’! That’s the line touted by author and international media mogul, Arianna Huffington. In many ways, it’s a reflection on her life and pretty much on the lives of many millions of others in the world whose health is affected - one way or the other - by over-work, exhaustion, and lack of sleep. The proponent of healthy living through better sleep was a prolific writer prior to an incident that occurred just two years after she founded ‘The Huffington Post’ - a news and blog site. She collapsed at work due to severe exhaustion and overwork – resulting in a facial injury too. It shook her so much and made her realise the perils ofunhealthy sleep patterns and made her a strong proponent of reform the work cultures of companies where individuals would be encouraged to maintaina balance between work, good health and life/enjoyment, thus making the work/life balance as the crucial facet of any company culture.

The lady has had multinational, multi-cultural, and multi-lingual experience and exposure to be able to pen down so much and yet leaving enough room for her to explore the world through the news platform – which she founded in 2005 (at age 55) and turned it into one of the most widely read and linked to (for its blogs) and most talked about media brands on the Internet and helping it win (in 2012, through the efforts of one of its reporters) a Pulitzer Prize for national reporting.

She is as much the odd-one out today as she was in her college days in Cambridge (U.K.) – as she is not afraid to speak her mind out on issues she is feels strongly about. In fact most of the 14 books (the 15th is slated to release in April 2016) have been driven by her strong response to circumstances prevailing around (like the Women’s Liberation movement, or the NATO intervention during the Yugoslav wars, etc.).

As much as she is a promoter of adequate sleep and the work/life balance, she also indulges in other activities that are akin to healthy living – she loves hiking, she meditates every day, and does yoga three or four times a week. So, the power woman Arianna Huffington for you. Read on.

Huffington was born in Athens, Greece, on July 15, 1950, and her birth name is said to be Ariadne-Anna Stasinopoúlou (her parents were Konstantinos and Elli Stasinopoulou). After completing her school education from her native country, she moved to the United Kingdom at the age of 16 years for higher studies. She enrolled at the renowned Cambridge University to pursue economics – eventually earning a master’s. Her strong views were to soon manifest themselves when she became the president of the famed debate organization – The Cambridge Union.

Arianna was a panellist on a couple of other programmes/games on the BBC like ‘Call my Bluff’ and ‘Any Questions’ and ‘Face the music/ (during which she met the love of her life, Bernard Levin), and also co-hosted BBC’s late night chat show ‘Saturday Night at the Mill’ for four weeks – from which she was dropped owing to viewer complaints.

Her strong debating skills coupled with an awareness that matched most forward thinkers, made her take to writing just about everything that she felt strongly about, and wanted to air her views - which were mostly conservative until the 1990s – when she turned liberal.She moved to London in the early 1970s to pursue writing with all the energy, zeal and knowledge she possessed. She wrote her first book ‘The Female Woman’ which was published with Random House in 1974. The book looked at and critiqued certain trends in women's liberation movements prevalent at time. This bought much acclaim and encouragement for her to follow it up with a political-oriented work called ‘After Reason’ in 1980.

It’s worth a definite mention here that much before she forayed into writing, she appeared in the famous musical quiz ‘Face the Music’ as a panellist with journalist, author, and broadcaster, Bernard Levin and fell in love with him. They travelled together to music festivals in Britain, Ireland, continental Europe and Australia but the equation of the relationship would not change because Levin wasn’t into marrying or raising children. He was after something else – spirituality and the sorts. So, they parted ways around the early 1980s but she would remember him and his love and personality forever.

To the land of dreams…

After the failed love (if it can be termed thus), Arianna moved to the USwhen she was about 30 years oldand started the journey of life afresh. Around mid-1980s, she met her future husband Michael Huffington (former Republican Congressman) and they got married in 1986 and had two children (daughters) with him. The couple got divorced in 1997.

In 2003 she contemplated to contest as an independent for the recall election of California Governor Gray Davis. But, she withdrew shortly and supported Gray Davis who was pitted against Arnold Schwarzenegger. For some reason her name remained on the ballot and she polled about 47500 votes (0.5 % of the votes).Of course up until she dropped out of the race, she had everything planned for the contest – a campaign adviser and an advertising executive taking care of her campaign and media presence. So, that was her second snub after her unceremonious exit from one of BBC’s late night shows decades ago.

Late bloom in the US

If a failed love, a more or failed marriage, and a failed career in the television industry didn’t deter her from working hard and coming up trumps every time she was down or was faced with some adversity or the other, would the minor and ever-so-inconsequential debacle (if it can be called that) in the elections hold her back? No. it wouldn’t.

Partly influenced by her father in terms of my passion for journalism, and mainly for her love of the art of bringing interesting people together, known and unknown, and mixing it up. Getting all these voices from real life and moving them online was what she wanted to do at the ripe age of 55.

In just a couple years after the electoral snub – in the interim she also supported the candidature of John Kerry in 2004 – she founded the online blog and news site – The Huffington Post. Although it also aggregates a lot of news from other sites, it primarily operates on its own with more than 500 journalists working to get them news, articles, blogs, and stuff.

It was such a success that AOL bought it for a reported $300 million in 2011 (of which Huffington is reported to have netted about $21 million) but she retained the role of the President of the Huffington Media Group and continues to do so even today.

Global version of the news and blog platform also gained traction at is moved countries afar such as the UK, France, Germany, etc. Triggered by the incident reported earlier in this write-up, Arianna makes sure people have the right work/life balance at least at HuffPo. Since she patronizes the idea so strongly, she also takes a nap or two during work hours – just to destress a bit. In fact, the company has installed two nap rooms in its US offices. At first people were reluctant to disappear to nap but now the rooms are so busy HuffPo is going to have to install a third. The UK office is demanding one too, quite rightly! Quite an influence and powerful woman this.!