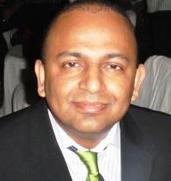 Har baargain! – The tag-line of India’s largest and leading local services marketing platform could not have been any more apt. The slightly twisted pun seems to suggest everyone involved benefits (gains) everytime, in every bargain. It is not for nothing that mydala leads the pack in the now almost matured and shrunken market space (in terms of competition) in the country. Today, more than a hundred and fifty thousand merchants (small & big) from, mostly, Tier-II and Tier-III cities of India, ply their trade through mydala. The bargain (of a discount) could not have been any better for them as it increased their visibility and customer-base, consequently. On the other hand, mydala, as the company says,is the digital one-stop-shop for all those who want to spend less and do more!

All this is the vision of Arjun Basu – the co-founder and CFO of India’s largest location-based coupons marketing portal. Of course, he was fully supported by his co-founders (wife, Anisha singh, and friend Ashish Bhatnagar) throughout

Inevitably, they made the mistakes that all start-ups did, which in a way was a good learning curve thus helping themtaking cues from what’s happening around (rather than jumping in with assumptions), understanding and identifying the local needs and, importantly, innovating to cater to those needs effectively, have been the foundations of the success of the platform.

Today, MyDala is the largest mobile coupon provider in India, with over a 100000+ retail businesses having used MyDala as a platform in over 196 cities in India. MyDala has been one of the well known success stories in the Indian entrepreneurial space.

A Bong from Delhi, educated in a Christian School with truckloads of raucous Panju buddies before heading off to the US to study, Arjun is a true global citizen and has traveled to more countries than most people can find on an Atlas. Self-admittedly, Arjun Basu wasn’t much of a career-person initially in the sense that he wasn’t decided, or rather hadn’t even given a thought to what’s to be made of his career.

Arjun has an MBA in Finance from Northeastern University and did his Bachelors in Engineering from Mangalore University. While at business school, Arjun interned as a summer associate at Merrill Lynch where he was focused on technology equity research.

His university professor’s encouragement, the brief internship under an inspiring leader, followed by close to 3 years of work where he got to interact industry and business pioneers now equipped his with the confidence to put to test his entrepreneurial ability, his education and explore the world of business

Prior to starting mydala.com, Arjun was a Director at Capital Fusion Partners, where he focused on promoting new businesses and raising capital. He has also worked with Capital One Bank where he managed a multi-billion multi-strategy investments portfolio. His investment focus was primarily on commercial real estate bonds (CMBS), as well as direct investments in commercial real estate and financial technology businesses.

Tryst with a new idea

Enriched by the taste of entrepreneurship, Arjun Basu started to look for something new, something different. During his quest for new ideas, he stumbled upon some content where the idea of group buying had been gaining much acceptance and it was also being explored in the U.S. (Groupon was still a blog at the time).

The humble beginnings of mydala

He co-founded mydala.com along with his wife, Anisha singh (now the CEO of the company) and yet another friend, Ashish Bhatnagar. At the outset, for obvious reasons, there were not even a handful of takers for the idea. The team however was convinced of the idea and set about realising the goal.

Set in a 3-room office which they shared with a dental clinic in Delhi, the initial team was only 5 people in July 2009. While initially their target of offering location-based coupons for group buying in mainly Tier-I cities as they would seem to have the maximum potential, they suffered.

The reasons were many, immense competitions from around 48 players (ecommerce), quite few of them well-funded with proven infrastructure, and then the idea being so new. But Arjun Basu and team was made of sterner stuff and just would not let go.

As his University professor had thought, Arjun Basu had it in his all the leadership qualities: vision, determination, organizational skills, and the capacity to take forward a team in tough times. Helped by his team along with his wife, he pulled it off and mydala was soon spreading its wings into the Tier-II and Tier-III cities and towns of India – as Arjun Basu and Co. had found that it is merchants from these locations that required helping and who would in-turn help turn the fortunes for mydala.

Thus the unlikely synergy worked and people started to take to mydala like it was there always – to find great deals for everything.

Another aspect that they had grossly overlooked was the power of mobile in India. So, they created the mobile version of the platform thus enabling greater reach for the potential customers. Also, since, it didn’t have much capital for marketing and expansion, mydala partnered with telcos (Vodafone was the first) to help in market the concept as well as for service delivery.

The strategy paid off and today almost 80% of its revenues are generated through mobile with more than 50% of the traffic coming from this mode.

Today, it has more than 150000 merchants listed, 28 million registered users and traffic of (reported) 400 million users, servicing in 209 cities across the country – thus making it the largest company in its sphere. Whoa!

Arjun LURVES his job, great food and travel. He unwinds by beating the pants off everyone at badminton and swimming and smiles most of the time except Monday, Tuesday, Wednesday and Thursday.

Way to go Arjun Basu – you are truly inspirational for all aspiring young entrepreneurs of the country (and the world as well). Keep rocking!!