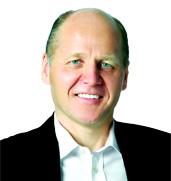 Sigve Brekke’s story, though the subject of a recent minor controversy, is queer to say the least. Right from his college days to the point of him becoming the CEO of Telenor, of which the Norwegian government reportedly owns 54%, Brekke’s has had a different bent of mind. This politician-turned-professional-turned-entrepreneurial leader has very smartly converted every little window of opportunity that presented itself along the 3 decades or so journey for good; and he is still the same. It may be just too early to judge his success in the top post at Telenor – as it is not even two quarters since assumed the responsibility. But, if his track record is anything to go by, then anyone that has got anything to do with Telenor need not worry; Brekke will almost surely make good of the opportunity. Along the way creating and unlocking a lot value to one and all concerned. There are challenges for sure with so many global players as well as the ongoing and relentless surge of modern telephony presenting myriad opportunities as well as tests for the company

Born 15 December 1959, Brekke joined the Telemark College, Norway, for an undergraduate course. However, he was attracted towards activism and politics even as he was about to complete the course – he had managed to complete 38 credits out of the 40 required to pass.

This event was to have a profound impact on his life and subsequent career as well. He was actively involved in the Labour Youth Organization (AUF) and his fortunes also kept swinging as those of the party. Then after several years he went to the USA and completed his Masters’ in Public Administration in 1998 from the John F. Kennedy School of Government, Harvard University

Politics attracted him much during his youth and college days; accordingly, he joined the Labour Party (Norway) and that is where his political career started. He went on to become a known force in the socio-political arena of the country as he went on to become the Secretary General of the AUF in 1993 and remained in that role until 1993.

With youth, especially the Labour Party, increasingly influencing so many areas of public affairs, there came knocking an opportunity for Brekke to put to test his knowledge and political clout in the form of the role as the ‘Political Advisor’ for the Ministry of Defense, Norway. He did well enough in that role and went on to eventually become the State Secretary of the Ministry of Defense – a position he held from 1993 to 1996.

After having seen and done what he wanted to in politics and having created enough traction for himself there, should the need arise (which would in later years at the time of him becoming the CEO), Brekke decided to pursue a Masters’ course in public administration in 1996. He enrolled for the course at the John F. Kennedy School of Government, Harvard University (MA) and completed the same in 1998.

Soon after finishing his time at the Harvard University, Brekke returned home and started afresh with – with a new career, in a new field.

He joined Telenor in 1999 as a business development manager and served in that position for two years until 2000when he was appointed as Managing Director of Telenor – Asia.

This lead Brekke in the conception and setting up of the whole business strategy of Telenor for Asia through the course of which he continued to rise up the ranks and assume greater responsibility. In 2002 he was elevated to the post of Co-CEO of dtac (Total Access Communication Public Company Limited) of Thailand – the second largest GSM mobile career in that country.

And it at this juncture that the leader in Brekke really started to manifest himself. He served in this role for three years until 2005 when he was made the CEO of dtac.

The growth strategies set in motion by Brekke when at the helm of dtac gained tremendous traction for Telenor in the Asian region and made it one of the primary players there. This prompted the founding of Uninor aimed at India operations specifically. Brekke of course was the CEO of Uninor who would oversee the entry and operations of the new entity in giant country with immense potential – which he did amidst intense competition from both regional and global players such as Airtel, Reliance (telecom), Idea, Vodafone, etc. He was also entrusted with the additional responsibility as Head of Asia for Uninor (India & Thailand) – given his successful stints with dtac.

Subsequently, he was made the Executive Vice President Telenor Group, Head of Asian region for Telenor in 2008. He oversaw the operations of Telenor and its subsidiaries for a period of about seven years before the top position (global) at Telenor beckoned.

Brekke became the President & Chief Operating Officer (CEO) of Telenor in August 2015. While it may appear as though he is still to find his feet at one of the world's largest mobile telecommunications companies with operations in Scandinavia, Eastern Europe and Asia, what one can be rest assured about is that – given his track record- right since his college and political activism days, Brekke seems to possess the so-called ‘x-factor’ to get things done.

The promise is immense and so is the potential in the market as well as the Norwegian telecommunications giant. Whether or not all of that will yield tangible results for everyone – employees, investors, the management, the board and, above all, the customers who have been promised a lot (from pricing, to services, to offerings) by each and every unit or subsidiary of Telenor across all the regions that it operates in – time will only tell. His propensity to weather the storms and turn the tides in his favour have been pretty well known since his college and political activism days – so, there’s much hope and expectations from the tough Norwegian.

Brekke is married, has three children and lives in Oslo (Norway).