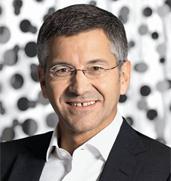 The desire to do one’s own thing and doing it best everydayis what drives Herbert Hainer, the longest serving CEO of not only adidas AG but also of any company listed on the DAX (German stock market index of 30 blue chip companies) in its history. In the decade-and-a-half that he has been at the helm of the world’s second largest sports goods maker, he is seen and done everything that he ever wanted to do right from the day he began to set his entrepreneurial journey on course, with an English-style pub in his home-town. Along the way, he has helped the company grow many-fold, instituted a culture of performance-oriented offerings with the end-user in mind, led some smart innovations, supposedly made some mistakes such as the acquisition of Reebok that hasn’t really taken-off like it was intended to, or the increase in the line of products for golf which wasn’t a master-stoke at all, and so much else (like changes made to the management – in terms of people as well as clubbing vastly different business functions to be under one executive, etc.)

But, he doesn’t regret that because, for him, it was always all in or nothing. So, in sticking to this tried and tested principle, there was bound to be some under-performance as history is proof of the fact that however much driven one may be to do something, often it is likely that there are several other factors that impede the probable success of one’s efforts. Yet, Hainer was not the one to just sit aside and let things unfold by themselves. Being a doer, he made every possible effort in his power and ability to sort of undo (if at all) some of the so-called mistakes.

By any standard and measure of success, however, Hainer, will still figure in the best business leaders that the global corporate world has seen, and when he hangs up his boots (the footballer in him was always there to guide him take forward the sporting giant), he would have left an almost awe-inspiring legacy.

Hainer, born (in 1954) in the village (or town as one would say) of Dingolfing in the south Bavarian region of Germany (about 190 Kms from the adidas headquarters, Herzogenaurach),took to football very early in his life and went on to play at the amateur level for Germany. Something that would enable him understand the needs of customers greatly when he became the CEO of adidas AG in later life.He graduated in economics from the University of Applied Sciences, Landshut in 1979.

Entrepreneur all the way

While he was a sportsman at heart, having picked up football (he was born just one day before the final football world cup in 1954) very early, the shrewd German in him made him to look for avenues that will shape his future life in the manner he wanted. Thus began his enterprise activitywith a smart move even as he was still in the final year of university education.It was something which he had seen in Munich (the center of culture, sport, business, politics, and revolutionary movements and, fun and frolic even) – pubs – that had gained popularity in the city. It struck him that something similar can be done in Dingolfing. And there he was launching --in his home town--the first English-style pubwhere customers stood at the bar.

This was a manifestation of the future self that he was going to be – of wanting to do his own thing and doing it to the best of his ability, every day. The pub was just a long array of people standing and drinking small beers for a much higher price.The idea appeared like a business opportunity to continue persisting with, which he did and which, eventually, helped him land in his first job at Proctor & Gamble GmbH, where he went on to work for seven years (until he joined adidas AG).

A long and enriching career with Procter and Gamble GmbH began in 1979, partly helped by his first entrepreneurial venture (the pub).He worked at P&G until 1987 assaying roles such as Division Manager, Sales and Marketing (Germany).

With proper grounding and a good mix of the best the world provided – sports, education, and an early tryst with business – Hainer was now on the cusp of entering into a phase that would forever change and remain as, his lifestyle

He joined adidas Germany in 1987 as Sales Director Hardware (Bags,Rackets, Balls) – in which role he worked for 2 years until 1989 when he was entrusted with more responsibility by making him Sales Director Field (Football, Textiles, and Hardware).

His ascent was evident when in 1991 he was made the national director of sales (adidas Germany) and worked in that role for the next two years. This stint at leadership entailed Hainer assuming another role with greater responsibility and, which was to ultimately help him to become the CEO. It happened in 1993 when he was made the managing director (Sales & Logistics) for adidas Germany.

The rise was well and truly happening when he was elevated to the post of Sr. Vice President Region Europe, Africa and Middle-East (Sales and Logistics). He proved his quality well enough to prompt the board of adidas to make him a member of the executive board of adidas AG in 1997.

His becoming the deputy chairman of the executive board of adidas AD in January 2000 was a prelude to him helming adidas AG the following year (March 2001) when he was assigned the task of taking forward adidas AG into the new century and millennium, by appointing him as its Chief Executive Officer.

Company at the cross-roads

Around the time that he joined adidas or thereabouts, the company was in trouble (in the early 1990s). Production was the costliest as compared to most of the competition which was outsourcing to the far-east, thus rendering adidas uncompetitive vis-à-vis pricing. It wasn’t much different when he took reign of the company – in terms of competition:there was still a lot of catching up to do – even in its bastion Europe.

That is where Hainer’s leadership has had the maximum impact. It has now become the undisputed #1 sports goods maker in Europe – although it trails Nike by a tad in the U.S. and elsewhere.

He has brought a culture of passion akin to sports (being a sportsman himself, even if it was at an amateur level). The work-ethic, perseverance, no-let-go attitude, and a constant endeavour to top the previous best is ingrained in every employee across the globe. Of course, being a human, you would expect anyone to err and so had Hainer. But, he hasn’t let those termed failures (Reebok, golf-line expansion, shift in managerial positions, etc.) to bog him down.

When he steps down after 15 long years at the helm that would also perhaps bring an end to his 3-decade old association with the company, one would imagine Hainer would look back with pride and a sense of satisfaction that he had always given his ‘All in or nothing’ to the company.