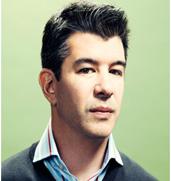 The headstrong, enthusiastic, and oh-so combative Travis Kalanick, CEO of Uber has ushered in a cult of so-called disruption in the taxi-hailing business. Uber was unique right from its launch and ‘uber’ special. In fact, it was so disruptive that legal amendments were named after it (uber amendments!)

What a vision it was by Travis and Co., the bunch of school mates to develop Uber and run a taxi-hailing business which surprisingly, neither owns vehicles nor employs drivers. It only enables the business by having made the technology that connects a user to a driver.The success and popularity, not to speak of the mass-acceptance of the service, are unmatched in recent history. So much so that cities have changed their laws to accommodate this Silicon Valley approach to transportation- invented, propagated, and propelled to enigmatic heights, by Uber

This is a brief peek into what made Kalanick click. Obviously, the technician and a biz-dev wizard rolled into one, could easily pass off as an investor's dream CEO proved by the runaway success of Uber – reportedly one of the most valuable privately held tech companies in the world

Travis Kalanick was born on 6 August 1976, in Los Angeles (CA) to Donald, an engineer, and Bonnie, who worked in advertising for the Los Angeles Daily News. Kalanick grew up in Los Angeles's Northridge neighbourhood and pursued his Computer Engineering, Business Economics from UCLA (1994 – December 1998) – which he did not finish out of choice. He apparently learnt to code when he was only in the sixth grade, and continued on a technical track through college at UCLA until dropping out.

Having dropped-out from college, Kalanick founded his first company, called Scour.net which, at the time, was a pioneer - a peer-to-peer service, file-sharing. But it had to be closed down in 2000 after not receiving any support from media companies besides the fact that the company was sued for about $250 million by about 30 companies for copyright infringement and other things.

But he was not be cowed down. He co-founded Red Swoosh that he defines in his own words to be running the world's largest Data Grid with over 200,000 machines simultaneously connected, and 3 million machines worldwide participating. We deliver data at speeds equal to premium CDNs and do so without having to ever pay for bandwidth again. But, the idea could not be propagate for long as one of the principal investors wasn’t convinced of the idea any longer. Thus, Travis sold off Red Swoosh to Akamai for a reported USD$ 19 million in 2007.

Kalanick was made of sterner stuff - never one to give in or let go. So, he kept himself afloat with a spate of investments while all along looking to rise again from the snub he and his company got through his initial days of entrepreneurship. All along he was scheming to, primarily build a business with his know-how, one of the under-currents was seemingly to score even with people who had obstructed the idea of ‘Scour’ from flourishing.

Thus he co-founded UberCab with Garrett Camp, in the June of 2009. The app caught the imagination of people in the taxi-hailing space and went on to shake some of the long-standing practicesin the business.

But founding a business based on a cool app is one thing and keeping it upto speed in today’s rapidly transforming life-styles is quite another. However, the cool bloke that Kalanick is, there is supposedly a playbook of the company for every situation, which he as well as the associates employ with precision every time the company needs help – from launching it in a new location, or making people relate to it, or just combating the criticism (warranted as well as unwarranted) coming it’s way, to recruiting the people taking care of the business and its interests, to addressing legal issues confronting the company.

Today, the company is valued (unconfirmed) at around USD $50 billion – to mean achievement for someone who seems to ever so inadvertently rub people the wrong side.

Brash as can be..

Fame (often) and success (sometimes) come with a price. Especially, if you are one of the most headstrong, uncompromising, and very combative person like Travis Kalanick is. So, he has had his share of acknowledged unpopularity (particularly of not being sensitive to some issues raised). But, he shrugs it off saying it is all – including the blame – part and parcel of the game.