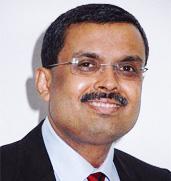 Balu Ganesh Ayyar, the CEO of Mphasis – a mid-sized IT services company, stands out as one of those business leaders who were mentored on-job. Right since his first job as a management trainee at a manufacturing firm to the many positions (up until he became CEO of Mphasis) at one of the global leaders, Hewlett-Packard, he picked up all the nuances of the leadership and put them to great use complementing them with his vision, strategy, and understanding of the market, and the capacity to self-introspect and then work toward correcting any anomalies. All these things have stood him and the company in great stead.

Ganesh Ayyar was born in Madhya Pradesh in 1961 to Prof. S.A. Balu and Brinda Balu. Madhya Pradesh is where he also had his schooling before moving to Chennai to pursue bachelors’ degree in commerce, which is completed from Guru Nanak College (Chennai). He topped it all after completing chartered accountancy in 1985.

Like quite a few successful entrepreneurs, Ayyar too had humble beginnings as far as his career was concerned, which he started with a management trainee role in the internal audit section of a manufacturing company. That’s fine – for it allowed him to make his entry into Hewlett-Packard (HP) in 1989. But his role there was different from what he was trained to do. He was assigned with the core responsibility of growing HP’s business in the APAC region. That was the spark needed for him to hone his entrepreneurial abilities further. Perhaps, the qualities were ingrained in him but he never gave vent to them as his chosen field was accountancy. Thus, the beginning at a manufacturing company in a department looking after the internal audit; then starting off at HP in a marketing role which was essentially aimed at growing the business – all helped fuel his passion for business.

Ayyar’s career really took off after joining Hewlett-Packard. He started off as the country sales manager, Singapore (in 1989), when the company’s focus was manufacturing and his initial stint helped him in the role. A couple years later the focus shifted to telecommunications and, thus all his subsequent capacities for HP for the next decade would revolve around manufacturing and telecom.

After successfully delivering on what he was entrusted with in Singapore, it was time for the management to take cognisance of his achievements and reward him duly, which it did by elevating him to the position of President of HP India. It is conceivable that the management saw only his achievements. It saw more than that. There was leadership, vision, and clarity of thought in the man – all of which made it for an easy decision to be made

In his capacity as the President of HP India, for two years he led the way in delivering the best total customer experience and strengthened HP's position in India

For obvious reasons, Ayyar would go on to excel in his role as the President of HP India in 2001, which was an indicator for the management that he was capable of assuming much more responsibility. Thus, the following year (in 2002) management asked him to take up another role – that of Asia-Pacific Director of Marketing for the Business Customer Organization. In that role, he was to co-lead for pre-merger Integration Planning for HP-Compaq Merger for Asia Pacific & Japan. Soon after the merger (May 2002), he took on the role of the Vice President at HP Services for South East Asia, and led customer support, consulting & integration and Managed Services business and continued to excel in the role for the next three years.

The following three years starting end-2005 upto early-2009 (before he became the CEO of MPhasis), he was entrusted with the responsibility overseeing a business turn-around of the outsourcing services (across Asia Pacific and Japan, as the Vice President Outsourcing Services, APJ region). And he did exactly that – the APJ region’s Outsourcing Services was recognized as the best performing region in 2008.

The next logical step was to step into the top position. Based upon his unrivalled understanding of finance, sales and marketing, general management, P&L management and people management, he was duly elevated to the post of Chief Executive Officer with additional charge as Executive Director of Mphasis (an independent subsidiary of HP with its own board of directors). The role required renewed vigour, unique vision and the will to take chances for the better – all of which came packaged in Ayyar. He has been able to more than justify his appointment for the company. He is accountable for not just the company’s growth and prosperity but also for creating sustainable value for the shareholders of the company..

His efforts took the company past 1 billion in revenues (in October 2010) which made it to the 1-billion revenue companies’ league (only the 6th Indian company to do so at the time). The point to be noted here is how he achieved all that. If one observes closely, in the 6 years that he has been the CEO of MPhasis, he transformed the company by rebuilding its strength in the direct business and making it to be seen as one of best-in-class company in talent management. There was also another facet of this transformation - keeping Corporate Social Responsibility (CSR) central to the business achievement. Not to forget that he has lead the company through four strategic acquisitions namely, AIGSS, Fortify, Wyde Corporation, and Digital Risk.

As for the future of the company, to further propel the company towards excellence, he has rebranded it with the tag line, “Unleash the Next” in 2014. And here is what he had to say, “What is ahead is a vibrant brand, future proof specialized portfolio of service offerings such as Digital, GRC, IS and AMS services, high value talent force, integrated automation in service excellence and being in the path of relevance of our customers.

While many in the industry and quite a few outside of it know what Ayyar was able to do with the then flailing Mphasis, whose turn-around is part of folk-lore now, very few may know of his social activities, the stand-out one among them being his efforts for the employment of people with disabilities. It was his desire to have them on-board and he made sure they were. The result: today over 400 people with disabilities have been employed by Mphasis, thus winning much appreciation as indeed fetching the company some awards along the way for its inclusion policies

Several initiatives were launched under his guidance and supervision; some of them are as follows

Setup Office of Disability Services in partnership with IIMB