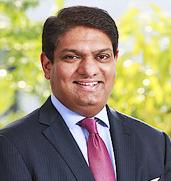 For Krishna Bodanapu, the CEO and Managing Director of Cyient (erstwhile Infotech Enterprises), the writing was on the wall right since the day he started understanding the world. That he had to earn his laurels before he could be elevated to the coveted post of the company that his illustrious father had founded and run successfully for well over two decades. He knew that he had to work hard, prepare himself, equip himself duly, in order to be able to live up to his father’s expectations.

In an almost clichéd manner, one has to say “Like father, like son” as Krishna did really earn the seat that his father abdicated. Young Krishna could have easily been tempted to just slip into the company in a management position and then be elevated. But, Krishna, like his father, chose the difficult path to success – to educate himself properly, get adequately skilled, acquire good amount of experience, learn the intricacies of business, and that too one which was enterprising, and rewarding and yet was fraught with glorious uncertainties. And after a decade of preparation - labouring throughout to learn the tricks of the trade while always contributing to the growth and profitability of the company he was, justifiably, promoted to the post of CEO of the company with his father assuming the role of executive chairman.

There will be naysayers who would be tempted to say there isn’t anything extraordinarily inspiring about Krishna. Well, this write-up should be an eye-opener for them.

His father achieved several academic laurels – Bachelors in Mechanical Engineering from Kakinada (Andhra Pradesh), Masters in Industrial Engineering, from the Indian Institute of Technology (IIT Kanpur), Masters from the University of Michigan, Ann Arbor (USA). Following his foot-steps, Krishna went on to pursue a Bachelors degree in Electrical Engineering from the Purdue University, and an MBA degree from the Kellogg School of Management, North Western University (USA). Clearly, the upbringing as indeed the awe-inducing presence of a successful father, were reasons enough for the young Krishna to not only pursue engineering but also to excel in the field.

In order to test his engineering skills as well as the waters outside of his family business, Krishna joined Altera Corporation, a leading semiconductor manufacturer in San Jose, California, right after finishing his education. He could easily have joined Infotech in some junior management capacity and subsequently pushed up the ladder, but he chose not to as that would rob him of the external experience that would gain from the rest of the world, and which he would greatly require in the times to come.

After working for sometime at Altera and picking up the nuances of the field, time was ripe for Krishna to put the experience to effective use for the company founded by his father. So, he joined Infotech Enterprises as sales manager, in which capacity he was entrusted with driving the sales of engineering services of the company in Europe.

After proving his mettle with sales in Europe and acquiring much in terms of global knowledge, he moved to India and held the dual roles of marketing manager for the company’s aerospace vertical and key account manager. In the former, he worked with many of our key aerospace customers, and proved to be an integral part of many successful customer engagements, while as key account manager, he assumed responsibility of relationship building and account management of several primary customers in engineering services.

In due course, Krishna was to traverse the successful path that many enterprising father-son combinations in business history have.

He went on the take up several roles in the engineering services of the company, such as Senior Vice President/ Head, President, and then Vice President – Strategy and Business Development

His father B.V.R. Mohan Reddy, a man with varied educational qualifications and business vertical experiences, and successes, was very instrumental in shaping as well as mentoring Krishna. And all his efforts have paid off well. Mohan Reddy persevered and built the company amid some very hostile and as well as high-profile competition and brought the company to a standing in the IT industry which many envy.

So, it was only natural that the man wanted to see it progressing and move the mantle of the company into safe and, importantly, capable hands. The preparations began two to three years in advance when Krishna was promoted to become President and Chief Operating officer of the company, in which role, like in all the earlier ones, Krishna contributed significantly to Cyient’s (as it was re-branded in May 2014), consistent growth in revenue, margins, customer satisfaction and associate satisfaction.

The good work put in by the scion did not go unnoticed and he was duly rewarded by the board by elevating him to the post of CEO with additional responsibility as its managing director in 2014.

Obviously, tasking with helming a company that has a turn-over of $450 million, with about 12000 employees spread across 38 global locations, and managing and rising up to meet requirements of some heavy-weight clientele is nothing short of a baptism by fire for Krishna Bodanapu. However, he seems to be utterly unfazed about it all. In fact, he has taken to the leadership role like a duck to water.

Of course the expectations would be high but knowing his upbringing, his father’s guiding hand and shining example, his skills and capability, understanding of the business, and above all, his confidence and vision for the future – all of them, one should not be surprised to see Cyient surpass all expectations and gain a position in the top-league IT players both in India as well as globally. Here’s wishing a very fruitful and impactful entrepreneurial journey for the man who has already accomplished so much and continues to exude the confidence and composure of a success-bound leader.