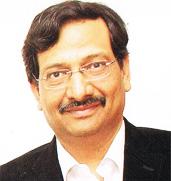 Determination and courage of conviction are two things that distinguish Arun Jain, CMD, Intellect Design Arena (and founder of Polaris Software Lab), from so many other noted business leaders of India. For, if he wasn’t convinced of his enterprising self and the talent he possessed, then he would not have pursued engineering at all (although it required some inspirational talk from his elder brother). No one can imagine what would have happened had he stuck to his original plan (not interest, mind you) of becoming a doctor, for which he is said to have spent or wasted (should we say) one year on preparation (for the pre-medical exams)

This story of a man with almost modest upbringing (had his schooling from government-run schools) to not seek employment after completing his education so at to do what he liked to do - the business of engineering, is a reminder to all those naysayers who are averse to risk-taking and are almost anti-entrepreneurial that, if one has the courage of conviction and is determined to carry forward the same, then it doesn’t really matter what challenges lie ahead, as the one with these two qualities will almost definitley have both the vision as well as the capability to overcome any such obstacle that one will encounter. It’s not like Arun Jain did not face problems. He did. In fact, a fair share of them. But, being the courageous man he was and is, almost everytime he overcame those with almost consummate ease.

So, he founded one company, learnt the nuances of running a business, studied what was required – as in what would sell, and do so in the long-run too, and then founded a company with specialized software products and services for the financial industry that was slowly waking up to the dawn of a technology-enabled business age. This would turn out be a master-stroke as the segment he chose to concentrate on would both, play a greater role in, as well as benefit from, another ensuing phenomenon called globalization, which opened up a myriad range of possibilities and, hence, the opportunities for one and all across the globe. All this meant finance would play a crucial role in realizing the full potential of this whole new paradigm that the world was embracing.

The man’s skill, shrewdness, and vision allowed the company to progress like nothing else, at least in the country, had ever. Along the way it went on to win the confidence and trust of many an international customer, mainly the biggest financial services company (at least at that point in time) Citibank, coupled with much appreciation and many accolades for its offerings and quality of the same. 'Best Under a Billion Company', and uniquely positioned as a pioneer in Financial Technology by Forbes, are but some of the recognitions and accolades that came Polaris’ way.

Being one of the ten children in the family meant that life was always at odds with the times, to be able to make ends meet, much less think of dreaming big – so big that one wants to be an entrepreneur. But, right since he was a child, Arun was Jain always inspired by the thespian of Indian industry, JRD Tata. So, it was a no brainer that he would definitely want to pursue something that will allow him to inch closer toward his ambition.

He did his schooling from the Harcourt Butler Higher Secondary School (New Delhi) and passed out in 1976. Amidst high expectations from family and friends, Jain first aspired to be a doctor, and accordingly put his heart and soul for preparation towards the pre-medical exams for one year. But, as it turned out, by the end of it, his elder brother, sensing Arun’s heart might perhaps be into something else, convinced him to take the engineering entrance exams instead. He fared very well in those, and got admissions in both Banaras Hindu University-IT (later rechristened as the prestigious Indian Institute of Technology – IIT, Kanpur) and Delhi College of Engineering (DCE). For obvious reasons, the latter was his choice because of the location and reputation of the college; besides, it also saved him his hostel expenses. Jain pursued his B.Sc. Engineering in Electronics from 1978–1983 at the coveted institute; and that (DCE) is where he learnt to make choices independently.

Entrepreneur all the way!

And it was the same fresh thinking and independent decision-making that allowed him to say no to the green card he had (in 1983) go to the USA. Instead, he decided to stay back and started ‘International Information System’ as his first company. This laid the foundation for the entrepreneurial spirit that he was to demonstrate throughout the rest of his life.

His next role was a director to promote Nucleus Software, in 1986, with like-minded individuals, who shared his ideas, philosophy and vision. The company was into developing banking software.

After a decade (3 even after starting Polaris) of astute leadership with Nucleus Software, Jain parted ways and moved to Chennai to follow his instincts to start Polaris Software Labs (later renamed as Polaris Financial Technology Ltd.,) in 1993, with a reported initial capital of a mere Rs.10,000. For two decades or so, the major account of Polaris has been, and still continues to be, the global financial powerhouse, Citibank.

With a focus to make it a viable global entity, he built a unique integrated model of products and services to provide a full range of solutions from consulting, products and services. Polaris went on to become a global software house providing quality and customized information technology (IT) solutions to several multinational clients across 20 countries, generating annual revenue of around $450 million (2014), got listed in 1999 and has over 13000 employees. Along the way, in 2002, Polaris acquired Citigroup’s software business in India, through one of the largest transactions at the time (reported to be Rs.280 Crores) and was able to fully integrate the merger successfully.

Over the years, however, the company was streamed into two – products and services. As it was allowing him little time to take-up the several social initiatives he had in mind, it was decided to sell off the software services business to Virtusa. The spun-off delving in products was called Intellect Design.

After scouting for the most worthy and deserving buyer – as Jain wanted the company to go into the hands of an equally responsible as well as capable entity, to not only benefit but also to protect and carry forward the legacy he had so painstakingly built over 20 years.

Once the de-merger was completed, and a great deal of load was taken off his shoulders, Arun Jain went about working on things that were closer to his heart, and that would help the society in some way. He wanted to do something, to the extent he can, for the health care system in India which, according to him, was one of the worst. Therefore, to address that, he would facilitate creation of an initial corpus of Rs 100 Crores for health care. Then, there are plans to set up 10 hospitals with 50-100 beds each over the next 10 years or so, to be run by a trust. The capital cost will be borne by the trust and the services could be offered at very low cost.

Then there is the educational field through which he wants to contribute to the society. But, that is more in the area of research and, something which is still in the idea stage but he is keeping the fund aside (for education).

Being a passionate advocate of ordinary people coming together to do extraordinary things, with a subconscious alignment for a larger purpose, he founded the ‘Ullas Trust’ to integrate Polaris employees with the larger community. The Trust has awarded over 36,000 scholarships to students in Government and Corporation Schools in India.

Always the family man – the quality he inherited from his father- Jain prefers relaxing with the family and kids during a day off, and spending the time with his eleven-year-old son, Uday, and four-year-old daughter, Aarushi by going on long drives, besides sometimes also go to a nice restaurant chosen by the children choose and have a quiet dinner.