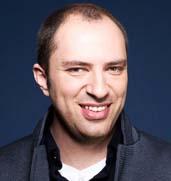 Yes, this is yet another rags-to-riches story but of a different kind, I am sure. It traverses one continent to another; from a constricted and shadowed life in one country to a freer, enterprising, and braver life in another country; from absolute penury to becoming one of the richest in the world. The Jan Koum saga is one worth extolling by one and all - those who have had their luck and share of success and as well as, primarily, those who aspire to succeed in life – mind you, not just professionally but in totality, brushing with destiny (fortune and misfortune) and giving a different perspective to people and shaping the lives of many along the way.

His creation, apparently the result of years of anguish at the state-driven paranoia, robbing people of their freedom in day-to-day life, privacy and choice – is a testimony of the fact that courage of conviction, more than anything else, is what matters when you are pushed to the wall by circumstances. Genius has the knack of creating opportunity out of adversity, and this is an indirect yet great example of it. Read on.

Koum was born on 24th February, 1976 in Kyiv, Ukraine. The date assumes significance as it was on this very day three decades later (in 2009), WhatsApp was launched. It is people like Koum who inspire us to keep going amidst extreme adversities and phases of hopelessness in our lives. For, if he and his mother had given in to the trying situation the family was in, in a Communist country back in the day, then there perhaps would not have arisen the need for Koum to migrate to the U.S., to pursue a scare-free life, much less a dream.

Imagine ones predicament if people were questioned for airing views, and younger ones questioned for holding a certain point of view, and even phones were tapped so you could communicate with you near and dear ones and indulge in small-talk even. Thus, lie was difficult in certain way for young Koum and his family and it decided to migrate to America. Initially, only the mother and son did, the father was to follow suit but couldn’t until the end. So, the background was all there for Koum to think of an application, when it came to creating one based on his new-found love for technology and computers. So, his creation, which facilitates an easy way to send messages across borders and between different brands of mobile devices was built on three basic guidelines or principals or tenets –call them what you want: no adds, no games, and no password as it connected by phone number and gave a gimmickless, reliable, friction-free user experience.

Right from the day Koum and his mother moved to the land of dreams when young Jan was all of just 16, it was a mighty struggle for existence. It could have been worse for them had it not been for the Social Support Program which allowed them to get a two-bedroom apartment. However, trying circumstances didn’t cease as they had to rely on the food coupons for subsistence, inspite of Koum’s mother worked as a baby-sitter and he as a cleaner at a grocery store.

While the industrious nature was always there, however, by the time he became eighteen, Koum started taking special interest in computers and programming, and thus, enrolled at San Jose and simultaneously worked at Ernst & Young as a security tester.

But things turned for the worse when his mother was diagnosed with cancer. Although it did provide them some financial support by way of her disability, it compounded the young man’s emotional crisis further, resulted earlier by the passing away of his father (who could not migrate to the US for some reason) few years after they came to the U.S.

When life deals a cruel blow, the toughest come up trumps more often than not. And, so it was with Koum. After he met Brian Acton (the co-founder of WhatsApp) during his stint with E&Y, he decided to join Yahoo!, which did after prodding by one of the company’s founders, in its infrastructure engineering department and served there for almost nine years from 1998 to 2007.

Both Koum and Acton were rejected by Facebook; both of them quit Yahoo! on the same day (October 31, 2007), and both took a break for a couple years, and went on a vacation, played ultimate Frisbee, and just whiled away their time – but with a purpose – to innovate the next big thing in technology! Koum came up with the idea and went ahead and incorporated the name of the company, which would also be the name of the application. It would be the world’s first ad-free, non-intrusive, no data-security – yes- you heard it right, it would not be required as there are no passwords, the messages get deleted from the servers after being posted (although they remain on the mobile phone of the sender/recipient), and absolutely no trickery whatsoever. As he says, his service would defiantly not carry advertising, an experience absent from his Soviet upbringing; it would not store messages and thus imperil individual citizens' privacy.

Like mentioned above, the company that would produce the application was started in an almost run-down place, obviously for want of funds and also since there didn’t arise any absolute necessity. The office was like a car dealership with no cars inside and hardly any furniture. The office contained a handful of desks atop a stained wall-to-wall carpet and many of the engineers worked remotely.

Up until three months after the app was developed and released, it didn’t exactly set the apps world on fire. But one month later, when Apple introduced push notifications in iOS 3.0, it did the trick for him, as it allowed developers to ping users when they were not using the app. Thus, in a way, making it an instant messaging app which caught on with users by hundreds initially, and then when went to add multi-fold as it was the best free texting app (the next or only other free one was BBM but it worked only among BlackBerrys) – and how it scored over others? Unlike others, on didn’t require to login every time one wanted to use it – ones phone was the login? That was the clincher.

When WhatsApp user swelled to 250,000, Koum went again to his friend Acton, who hadn’t been on-board earlier (was sceptical, hadn’t decided what to do). This time though Acton was more than convinced and since he also believed in the no-ads, no-gimmickry, and no invasion of users’ privacy, he now put all his power and resources behind Koum’s app. and brought in a basic-annual subscription fee model in some countries. But that did not deter users from handing on to it.

By November 2011, the app had well and truly caught on - it was the No. 1 paid social app in the App Store and had logged 10 million downloads on Android. In the course of the next couple of years, the user-base would swell exponentially to 450 million – a whopping figure that would catch anyone’s attention; especially ad sellers. But, since it would not work, there had to be someone who valued the world’s best messenger without worrying about revenues. And it was none other than that sensational whiz-kid Mark Zuckerberg, founder and CEO of Facebook, who assessed the potential of WhatsApp (not monetarily) but as a worthy addition to its stable, and acquired it for a whopping $19 Billion and the rest is history.