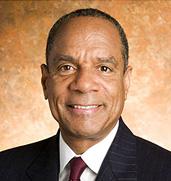 A combination of public service leadership and corporate leadership is rarely seen. The chances of it being exhibited by one person are rarer still. But, for Kenneth Chenault, the and Chairman of the American Express Company - the company with the mission to be the world's most respected service brand-, that's like a piece of cake.

He carries on his shoulders the responsibility of leading one of the world's leading financial services companies with as much ease and élan as he renders his efforts and and all that he can contribute, to public service.

Obviously, a variety of organizations of repute and, power even, have recognized these most revered qualities in Chenault, manifest from the fact that he is on the advisory board of the White House, and his services have been widely recognized and commended by civic, social service and community organizations for his public service leadership.

Kenneth Chenault was born to Hortenius and Anne Chenault (June 2, 1951) in Long Island, N.Y., but the family with four children moved to Hempstead (Ken was the second of three brothers and a sister). He went to the Waldorf School of Garden City, N.Y. which seemed to have an impact on his persona as he himself says that it created a useful balance for him as, in Hempstead, where the family lived, the environment was predominantly black, while the school was predominantly white. This, inadvertently, shaped the strong personality as indeed the leader in young Kenneth. Leadership qualities had started manifest themselves in the Chenault from a very young age; he was elected class president in each of his last four years, and as a senior captained the basketball, soccer, and track teams.

Upon graduating out of Harvard Law School, he got a job at the Wall Street firm of Rogers & Wells. This was a digression from his chosen field – law. But, it was conscious decision to try something new, which business. After three years at Rogers & Wells, he joined the management consultancy Bain & Co. (Boston), where he was promoted to manager.

The move to AmEx

After a couple of years at Bain & Co., around 1981, Chenault was offered a job by American Express, in the strategic planning department. His first assignment at AmEx involved TRS's (Travel Related Services Co.,) merchandise-services division, which sold jewelry, stereo equipment, etc., to cardholders by direct mail. Chenault’s was supposed to be one of the acquisitions which would eventually work like a change-agent by the man who headed this division of AmEx.

While merchandise-services unit was in no great shape when Chenault joined, but its potential intrigued him. A couple of years into AmEx, Chenault, was elevated to the position of vice-president for marketing of the ‘merch-services’ unit. And it in this division that Chenault demonstrated the spark that would eventually go on to see him helming AmEx. In what seemed like a unit with no future, Chenault turned it on its head. In the two years that Chenault headed this unit, its revenues soared to $500 million a year from about $150 million.

The scent of success

From 1986 to 1989, Chenault was promoted three times, managing in succession the gold card/platinum division, the green card division, and the entire consumer card group – this was possible only because AmEx was able to find its feet, thanks to Chenault’s superior management skills and vision, amidst fiercely growing competition from the likes of MasterCard International and Visa and many of their ilk who were flooding the market with a multitude of attractive offerings and services. What all this meant was that not only did American Express find it harder to sign up new accounts, but even its existing members were using their cards less and less.

The reversal: for good!

To counter the competition and hold on to its position, Chenault and his folks who believed in the change, introduced a revolving credit card, Optima, and began broadening its merchant base by adding mass-market retailers – but the approach found resistance from the higher-ups at AmEx. Chenault was not to be bogged down – he stood firm with his conviction and put forth his case judiciously – he had to as he felt that the ‘AmEx’ brand was fading fast.

He took tough decisions and stood by them. The burden of identifying and implementing cuts fell mainly to Chenault as the senior card executive. Each of TRS's four main lines--green card, gold card, platinum card, and traveler's checks--had its own sales, marketing, and processing staffs. In mid-1992, Chenault started the daunting task of collapsing these four principalities into a single, leanly staffed unit. TRS promptly took a $342 million restructuring charge and eliminated 4,800 jobs. This amounted to fully 9% of AmEx' workforce, but the pain was just beginning.

Chenault’s perseverance paid off in early 1993 when he was promoted to president of TRS where his put the card business into high gear at last and, under his direction, the type of cards AmEx issues soared from 4 to 60 in a few years' time. At Establishment Services, meanwhile, the focus shifted from damage control to expansion. The number of new merchant accounts doubled to 60,000 in 1993 from 30,000 the previous year and is now running above 400,000 a year.

He was promoted to vice-chairman of American Express in 1995. This presented him with the opportunity of broadening the restructuring drive beyond TRS to encompass every part of the company and deepened to include every managerial system and work process. All of this resulted in $3 billions of cost being eliminated, along with 15,800 jobs – which, was not done harshly, as employees slated to lose their jobs were notified as soon as the decision was made--resulting in notice of as much as 18 months. the trust and balance was maintained and AmEx continued to grow on balance as the $3 billion in savings was wholly reinvested within the company. And surprisingly, total employment rose to 73,620 in 1997 from 61,108 in 1991 – which would otherwise have meant a real down-sizing. AmEx' stock, which scraped bottom at 17 in 1991, continued to hit new highs.

The signs were ominous – Chenault’s rise was along the expected lines and his ascent to the top was but only a matter of time. Chenault became President and Chief Operating Officer in February 1997 and four years later (on January 1, 2001), he was elevated to the CEO position, and as Chairman on April 23 of that year. Chenault has left no doubts as to where and how he wants AmEx to be. As has lead with the same conviction and over-seen the company’s stable survival and persistence through some turbulent times (such as the 9/11 tragedy which happened right across the street and in which some of AmEx’s people also died). If anything, he has learned from such travesties and has only grown stronger, and stronger, by the day.

He continues to inspire many an aspiring business leader in not only succeeding professionally but also in public life through his intervention and contribution social causes.

He and his wife, Kathryn, live in New York with their two sons, Kenneth Jr. and Kevin.