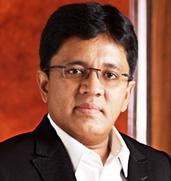 “I don't believe in industry's perception, I believe in creating trends…..”

Kalanithi, as the name implies "treasure trove" in Sanskrit, is often referred to as Chanakya in the business circles of South India. He is the man of few words and his predictions, whether in business or in personal life, tends to come true. He is an Indian media tycoon who is Chairman and Managing Director of Sun Group, which was the most profitable television network in Asia with 20 television channels and 46 FM radio stations. While his television channels and newspapers are primarily concentrated in South India, his FM Radio Stations and DTH Service are spread across the country.

Kalanithi entered into the field of aviation and acquired Spice Jet, which is one of the India’s profitable airlines in the 2010. He later transferred the Spice Jet ownership to the original owner Ajay Singh in the year 2015

Kalanithi was born in 1964 in a politically influential family. His father Mr. Murasoli Maran was the former Union Minister of Commerce and his brother Dayanidhi Maran was India’s Textile Minister. He is also the grandnephew of Muthuvel Karunanidhi, who is an Indian politician and served as Chief Minister of Tamil Nadu in 5 separate tenures.

He completed his schooling from Don Bosco, Egmore, Chennai and graduation from Loyola College, Chennai. At that time he was the Student Union’s Chairman. He pursued his MBA degree from University of Scranton, Pennsylvania, USA.

So the foundations for brilliant career were well and truly laid:

Kalanithi is the owner and serves as Chairman of Kal Publications Pvt. Ltd. and Kal Media Services Private Limited. He served as Managing Director of Sun TV Network Ltd. (Sun Network) until Apr’12. He joined family business, a publication company of five publications (dailies and weeklies), as an Apprentice.

He proved to be successful in spite of his father's political rivals ruling the state, since he entered media business. He also emerged as No. 1 in neighboring states where his competitors include politicians and business men from those states.

He got into business at the age of 27 and successfully launched one of the first regional video magazines 'Poomalai' in Tamil in 1991. Under his leadership Sun TV Network Ltd. launched Sun TV in 1993, one of India's first international regional language satellite television channels and Suryan FM.

He started his TV channel with an investment of US $ 86000 from bank loans and he proved to be successful inspite of his father's political rivals ruling the state for most of the period since he entered into media business. Sun TV was listed on Bombay Stock Exchange on Apr’06 with 10% of the shares widely held and 90% still owned by Maran.

On January 11, SpiceJet put 1 million tickets for sale at Rs 2,013 a piece (all-inclusive). The window of discount stayed open for 72 hours, and was meant to attract traffic during the lean season (March to June). On a normal day, airline sold upto 45,000 tickets; but on those three days, it sold 700,000 tickets. In one stroke, Kalanithi Maran, the promoter of SpiceJet, had stirred the aviation market that had gone sedate with the exit of Kingfisher Airlines. Kalanithi kept himself away from the limelight. Actually, that's how the owner of SpiceJet, the Sun Media Empire and SunRisers, the Hyderabad franchise of the Indian Premier League, chooses to be.

Kalanithi married Kaveri, a native of Coorg, (Karnataka) in 1991 and has a daughter named Kaviya (Born 1992). His wife is the Joint Managing Director of Sun network.