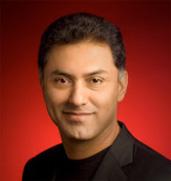 We have seen entrepreneurs creating livelihoods for innumerable people through their visionary enterprise activities. Some have built on their ingenuity, some have carried forward legacies, while others rose through the ranks – earning and learning along the way, thus being able to inspire and lead successfully. But the role Nikesh Arora, the CEO of the $7 billion Japanese telecom and internet giant, SoftBank, has assumed is completely different from all of that, yet absolutely visionary all the same.

In fact, if we want to talk about being a true visionary, then the role he is essaying right now is that of one who is helping shape the visions of others. Trusting their capability to deliver in not one, or two or three years but a lot longer than that – something like a decade or more, and investing in them heavily with all the investments in the range of $100 million or more.

This he did after spending a decade at Internet search giant, Google, being the number four (or atleast among the top four) leaders of the company. He was doing well enough there – so what would have prompted him to switch to SoftBank – definitley not the hefty pay of $135 million, as he himself has invested about $500 million in SoftBank (buying the shares in his personal capacity). Then what?

This is where the talk of being the visionary to visionaries comes into the picture. Having the funds to invest in companies is a lot different from being able to see the long term vision of a company however small or new it may be, and then backing it fully (not partly), takes extreme courage, business acumen, wisdom and, above all, vision – of the future world, of the company, and of the investment. This is what Softbank has been doing for about two to three decades, and with the onset and rise of an internet-enabled world, the world of eCommerce has been attracting immense interest of the group (as it is now called as SoftBank Group).

Precisely for sharing the same vision as the company and as that of its Chairman, Masayoshi Son, is what perhaps drew Nikesh Arora toward SoftBank from Google.

While being the son of an Indian Air Force officer didn’t make it any easy for Nikesh Arora, but what it did was to imbibe in him a sense of hard-work and discipline very early in life. Born on 9th February, 1968, in the city of Ghaziabad, Uttar Pradesh (a northern state of India), Nikesh went to study in various Kendriya Vidyalayas (schools meant for children of public servants) and Air Force schools, before doing his electrical engineering from the Indian Institute of Technology (Banaras Hindu University – BHU, back then), which he finished in 1989.

Flight to the land of dreams

A year after graduating i.e. in 1990, he left for the U.S. to pursue higher education. With only $200 in his pocket and a few thousand more borrowed from his father towards meeting his higher education expenses, he flew to America and enrolled for a Masters in Finance at the Boston College, and followed it up with an M.B.A. from the Northeastern University.

Surprisingly, for an engineering guy, his first job was at Fidelity Investments, and perhaps this is where he knew where he was headed in the future – engineering or no engineering. In a span of five years at Fidelity he rose through the ranks and was the Vice President Finance by the time he left Fidelity to join another Boston-based finance firm, Putnam Investments, where he worked for the next three years. After tasting leadership at two renowned finance firms, he assumed the role of CEO for T-Mobile, PLC in 2000, and became the Chief Marketing officer of its Europe wing, T-Mobile Europe the following year.

True leadership will get noticed by even the pioneers, as they sense people of their ilk. And so it happened when he joined Google in 2004 as telecom industry analyst (formal role being that of President, EMEA Sales, Marketing & Partnerships, Google Inc.). After serving several key positions he was elevated to become the Senior Vice President and Chief Business Officer in 2011 – reportedly the top-four position in the company, in which he stayed until his exodus to SoftBank in September 2014.

When Masayoshi Son, the leader of Japan’s leading telecom and Internet Company hired Nikesh Arora, many heads turned up. Why did the inspiring and so successful leader bring in someone like Arora. The reason is simple – the man’s relevant and successful experience (be it T-Mobile PLC or Google’s EMEA business) that has turned almost everything he has touched into gold in the few leadership positions. There must also have been another reason, I daresay. Why would visionaries like Larry Page and Sergey Brin bank on somebody like Nikesh if they hadn’t spotter the spark in him? Whether or not it was this, but Son entrusted him with the role and in only a year since joining SoftBank, Nikesh has stamped his mark on the Japanese company.

In just less than a year, Nikesh Arora already directed about 200 billion yen ($1.67 billion) worth of deals that include investments in Indian technology start-ups - Snapdeal, an online marketplace, and taxi-booking service Ola Cabs (per Nikkei Business Daily).

Perhaps Son had already seen this coming and as an indication of the trust and confidence he had in Nikesh’ abilities, named him as his successor – no less an achievement for someone with relatively humble beginnings. He along with Son are now taking the investment world by storm with investments of $100 million or more in companies, especially start-ups, which they feel have a bright and successful future. As for his personality, there are enough hints about it in his various quotes and interviews (some quotes below).