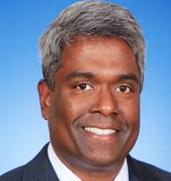 The simple fella from Church Street, Bangalore (now Bengaluru), could pass on as just another guy from the neighbourhood. But, if one digs a little deeper into his roots – family, education, and the place George Kurian, hails from, one will notice that all that he has achieved wasn’t quite by design. Nor even by fluke. It was purely on the strength of the basic grounding he had from his parents, the school where he studied with his brothers and, of course, above all the traits of a doer – the capacity and willingness to make good of the gift he was blessed with, a sense of industry and, the willingness and foresight to explore. It is such enterprising nature that has churned out successful entrepreneurs bringing forth their leadership and putting it the use of self and others.

Although George Kurian, the current CEO of NetApp, is only into his third month as its chief, there are ominous signs that he is the right man to take the $6 plus billion dollar (revenues) company successfully forward – evident from his investiture speech, "I look forward to engaging with the entire NetApp community as we execute our strategic plan and key investment areas of accelerating clustered Data ONTAP adoption, regaining traction in the channel, and increasing our sales capacity. We are committed to delivering improved growth and financial performance and remain confident in the strength of our technology and hybrid cloud strategy."

The Kurian brothers & their education

The Kurians originally hailing from the Indian state of Kerala, belonging to the Pampady village of Kottayam district of the state. George has four siblings, him being one of them. But, the family later moved to Bengaluru (India) where the brothers grew up in Church Street and studied at St Joseph's Boys High School which had a saying 'faith and toil', embedded in all the brothers as it is in all the graduates from that place. Kurian then got into the prestigious Indian Institute of Technology (IIT), Madras (now Chennai), to pursue engineering. But this was soon followed by travel across the seven-seas in 1986 to the United States to pursue another bachelor’s degree in electrical engineering from Princeton University (US) from where he graduated in 1990. And finally, making the academics complete by topping-it up with a master’s degree in business administration from Stanford University.

George Kurian’s exposure to the big league, as far as ISPs were concerned started, with Oracle. At Oracle, Kurian tasted leadership when he assumed responsibility of leading the Software Engineering and Product Management teams. Thus, one success lead to another, not only for him but also for his twin brother, Thomas (Kurian), who got to work up the ladder himself at Oracle Corp. presently the President of Product Development there.

While Thomas continued with Oracle, George pursued other opportunities and kept on adding to his diverse professional as well as leadership qualities. Right after moving from Oracle, George Kurian Joined Akamai Technologies, the world’s leading content delivery network enabling smoother web-traffic management for thousands of companies. Over time, Kurian went on to become the Vice President for Product Management and Strategy at Akamai Technologies.

From then on there was no looking back for George as he took up the role of a Management Consultant with McKinsey and Company – which experience was to equip him with the intricacies of managing and improving business as indeed allowing him to gain further perspective into leadership, entrepreneurship, vision, and strategy.

Having assumed leadership and a breadth of its shades, Kurian joined Cisco Systems, the giant in networking equipment and services. At Cisco, he was to helm the Application Networking and Switching Technology Group as its Vice President and General Manager of the multi-national. He left no doubt as to what was coming as far as his professional career was concerned, where he was responsible for Cisco products for the Modular Campus LAN Switching and WAN Application Delivery markets. He made further progress along with that of the company by leading Cisco’s successful development of products and solutions to enable Ethernet-based Converged Networks for Video, Voice and Data.

was concerned, where he was responsible for Cisco products for the Modular Campus LAN Switching and WAN Application Delivery markets. He made further progress along with that of the company by leading Cisco’s successful development of products and solutions to enable Ethernet-based Converged Networks for Video, Voice and Data.

The experience at Cisco served him well and he joined NetApp, one of the world’s pioneer computer storage and data management Company in April, 2011. After taking several key initiatives, in September 2013, he was elevated to the post of Executive Vice-President (Product Operations) responsible for overseeing the strategy and development of NetApp's Product and Solutions portfolio.

Taking into consideration his excellent track record both academically as well as professionally, the board of directors of NatApp chose George Kurian to take over the reins of the company. He was named CEO in June 2015 and he was also made a director on the board.

It very early to comment about his achievements as the head of NetApp, but if history is to be believed the, there should be no doubts as to how he will perform in this new, powerful, and challenging role. All the very best George Kurian!

Mr. Kurian is responsible for overseeing the strategy and development of NetApp’s Product and Solutions portfolio. He was Senior Vice President of the Data ONTAP group at NetApp since December 2011

He oversaw the product roadmap and engineering execution of the Data ONTAP Operating System, the world’s most widely deployed storage operating system, and the associated On Command Storage Management product portfolio.

He served as Senior Vice President of the Storage Solutions Group at NetApp where he oversaw the NetApp solutions portfolio and joint partner technology integration roadmaps. He joined NetApp in April 2011.

Prior to joining NetApp, he served as Vice President and General Manager of the Application Networking and Switching Technology Group at Cisco Systems. In this role, he was responsible for Cisco products for the Modular Campus LAN Switching and WAN Application Delivery markets.

He also led Cisco’s successful development of products and solutions to enable Ethernet-based Converged Networks for Video, Voice and Data.

He has been Director of NetApp, Inc. since June 1, 2015. He holds a Bachelor of Science in Electrical Engineering degree from Princeton University and a Master of Business Administration degree from Stanford University

Mr. Kurian is married with four children and lives in California. He resides in Los Altos Hills, California, with his wife, Yvonne