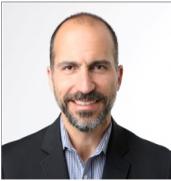 The hardest thing for us is to build is lasting consumer loyalty...

Dara Khosrowshahi’s story is one that could have inspired Mario Puzo to, perhaps, craft another Godfather-like character, had he been around today. For this Iranian-American, much like Puzo’s Italian-American (Don Corleone), has turned everything he has touched into gold, in his own way: again like Don Corleone! This mild similarity apart, Khosrowshahi’s career would appear like one helluva roller-coaster ride. But, if one observes closely, it’s not difficult to notice the hard-work, the skill, and perseverance he has put in to be where he is today.

Right from starting off with his job at a small boutique investment bank, a digression from his chosen field -engineering- to now helming one of the world’s largest online travel companies, Expedia, Khosrowshahi has demonstrated the vision, eye for opportunity which are wonderfully complemented by his shrewd sense of timing: the hallmarks of champion entrepreneurs.

Leadership seems to be the forte for this Ivy Leaguer – for, except the initial three years of his professional life, Khosrowshahi has willingly assumed roles demanding greater responsibility and accountability – and he has shouldered all of them with consummate ease!

Dara Khosrowshahi was born on May 28, 1969, in Tehran, Iran. It is reported that owing to the internal strife in his country of birth, the Khosrowshahi family decided to move to the land of dreams and settle there for good in 1978. Dara was only 9 years old when this happened. It was actually a regular annual vacation to southern France but which turned out to be a long, long vacation for the family, and especially Dara, who has never looked back and treated it as a vacation since.

Khosrowshahi completed his bachelor’s in bio-electrical engineering from Brown University (one of the Ivy League colleges), Rhode Island, in 1991.

Right after completing his graduation, he joined Allen and Company, the media investment bank, as a junior banker. He then went on to become its Vice-President in just about 4 years i.e. in 1995, in which position he served for three years, upto 1998.

This was followed by his acquaintance with Barry Diller the Chief Executive of InterActiveCorp, which association was to grow as time passed by, as he joined his company (then called as USA Networks Interactive) as vice president of strategic planning, eventually becoming its president.

Consequently, Khosrowshahi joined AIC travel, a division of InterActiveCorp, as its CEO. When IAC acquired Expedia from Microsoft in 2005, Khosrowshahi assumed the responsibility of its CEO.

The chance rendezvous with Barry Diller

Until Expedia happened, or should we say until he met Barry Diller, the Chief Executive of InterActiveCorp, Khosrowshahi wasn’t involved with the travel industry. As we know, up until then he was working with Allen & Company as a junior banker and plying his trade in the financial industry. The meeting itself was by chance. As it happened, Allen & Company was advising Diller (who, at the time, was the head of QVC shopping channel) on his attempt to take over Paramount. That is how the two of them met; and the rest his history, as we know it. Dara was instrumental in the initial expansion of IAC's portfolio of travel brands, which now comprises Expedia, Inc.

In the initial years, Khosrowshahi teamed up with Diller and worked with him in financial matters and advising him on take-overs. One of his first projects was to buy a company called 1-800-hotels. Khosrowshahi oversaw the successful completion of 1-800-hotels, which is now called ‘Hotels.com.’

This was followed by buying the controlling stake in Expedia (created and then owned by Microsoft), and a spate of acquisitions including HotWire, the deep discount travel site in 2003, and TripAdvisor.com – a site with extensive travel reviews, in 2004.

The association is one of mutual respect and understanding – they agree to disagree on matters that matter to the company and its future.

When Expedia was acquired by IAC in March of 2003, it would have been anybody’s guess as to who would take it forward, despite Diller having a greater say. But, when IAC completed the spin-off of its online travel businesses into Expedia, Inc, there was only one man – Khosrowshahi, to take the independent entity to greater heights.

Thus, it was announced in August 2005 that Dara Khosrowshahi would be its CEO.

Ever since, and under Dara Khosrowshahi’s leadership, Expedia has gone truly global and extended its presence to more than 60 countries worldwide through the Expedia, Hotels.com, and Hotwire online booking brands, and the travel community sites of TripAdvisor Media Network. Expedia operates over 70 Hotels.com booking sites and 20 full-service Expedia-branded booking sites, thus by June 2010, it had become the largest travel agency in the world.

His able and visionary leadership has seen the company achievement many milestones as under:

Today, Expedia, Inc.’s numbers read something like the following:

Dara Khosrowshahi is married to Sydney Shapiro and has two daughters.