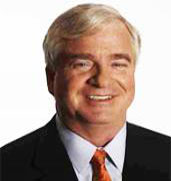 Playing niche is not only difficult but always a path ridden with numerous obstacles. More so, if you are trying to do that at the ripe age of 50 or so. But, Jerry M. Kennelly, the founder, chairman, and CEO of Riverbed Technology – the leading application performance infrastructure services company – has overcome each and every one of those impediments and come up trumps done with flying colours. His vision, in it, and the ability to take a team of driven individuals forward, in creating value for both the company’s customers as well it itself, is quite a saga in itself.

In fact, it is his leadership more than anything else that has lead to the fantastic growth of Riverbed in just a matter of 10years or so. In employee reviews, Kennelly was recognized for creating a great culture, inspiring employees, his vision/direction for Riverbed’s future, friendly demeanour and openness – manifest in the words of a Riverbed employee (wrote in a review) - “Great history and success. Jerry is a fantastic CEO with tons of enthusiasm and energy. Very personable and cares greatly about his company and people.

A C.P.A., Kennelly holds a Masters degree in Accounting from the New York University (Leonard N. Stern School of Business) besides the B.A. degree in Political Economy from Williams College.

Jerry Kennelly worked for Tandem Computers (a computer company now part of Hewlett-Packard Development Company) from 1980 to 1988, serving as its Worldwide Sales and Marketing Controller. But then the finance guy had to make good of his chosen field, so for about the next two years (from 1988 to 1990), he served as a Finance Director (for United States Operations) at Oracle Corporation.

Following his stint at Oracle Corp., he held a number of senior financial and operational positions, including Vice President of Corporate Finance, at Sybase, Inc. for the next 6 years (from 1990 -1996).

Kennelly went on to rise in the ranks with each job assignment he took up: be it Oracle Corp., Sybase, Inc., or even Inktomi, where he joined in 1996 as its Chief Financial Officer and Vice President of Finance. He continued to the ladder at Inktomi in the years that followed – he was elevated to the post of Senior Vice President of Inktomi Corporation in December 1999.

That was his introduction to a truly leadership role which was soon followed by him assuming the Executive Vice President and Secretary of Inktomi Corporation leading the inception of Riverbed.

His experience at major software infrastructure companies, HP, Oracle, and Sybase had brought along deep business insights. There were underlying problems that impeded business performance. The entrepreneur in Kennelly saw a great business avenue presented by the small window of opportunity called application performance. In fact, he was to prove how significant this area of enterprise IT is once he brought along a team of like-minded individuals to found Riverbed Technology – in May of 2002.

Riverbed was founded in 2002 to eliminate distance and location as constraints in delivering applications by solving the problems of latency and bandwidth limitations in wide area networks. It has done more than that.

In just over a decade, Kennelly has inspired as well as overseen the phenomenal growth of Riverbed, from a to the market leader ($1 billion annual revenue) in application performance infrastructure, with 73 offices across 37 countries. Apart from standing on its own (and standing tall at that! – voted amongst the 20 best places to work in the world), the company made some very smart acquisitions right from its take-over of Mazu Networks, Inc. in February 2009. CACE Technologies Inc. (Oct 2010), Global Protocals LLC (Nov 2010), Ltd. (Jul 2011), Zeus Technology Ltd. (Jul 2011), Expand Networks (Jan 2012), OPNET Technologies, Inc. (Dec 2012), & Infineta Systems (Mar 2013).

While it had successfully acquired a handful of companies and made good out them, Riverbed recently rejected a $3 billion acquisition bid by Elliot Management (one of its investors) – citing the offer the company worth. There could have been many reasons for the apparent but Kennelly definitely would have had his reasons, otherwise he would not lose an opportunity for unlocking the immense value he has created, for everyone concerned with Riverbed. Although there is immense pressure from some quarters to just lap it up, Kennelly wasn’t willing to give in easily.

Whether or not Kennelly yield to the market pressures when the company was bought by Thoma Bravo (and Teacher’s Private Capital - the investment arm of Ontario Teachers' Pension Plan.) for a reported $3.5 billion, in December 2014. We can safely say that Kennelly would have at least made sure that Riverbed has gone into safe hands, and will continue to work and progress in the manner and spirit with which he had envisaged it, and brought to the position it is today.