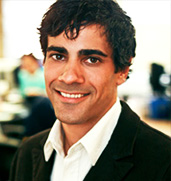 An interest in computers that started in 5th grade blossomed into a great skill for Jeremy Stoppelman, the young and sporty-looking CEO (&Co-founder) of Yelp Inc. By the time he was in 10th grade, he knew what he wanted to be when he grew up – a video game programmer & a businessman, to boot. His somewhat resemblance (referred to often by some) to Pete Sampras – the tennis legend, has also reflected in the success the man has had in making Yelp not only compete with giants like Google & Facebook but outperform them vis-à-vis reviews-based local search. So much so that reportedly Google, whose offer was once turned down by Stoppelman, is trying to remove Yelp entirely from its search index. What’s more he even snubbed (well, almost) a take-over bid from Google – despite stake-holder anguish. All these show the man is made of much sterner stuff than what appearance seems to suggest, if at all.

Yelp Inc., which started in San Francisco as a vague idea about "local," now has 70 million unique monthly visitors, and has expanded to 17 countries, making Stoppelman one of the young Turks of Silicon Valley.

Born to a teacher mother and a securities lawyer father, on November 10, 1977, Stoppelman spent much of his childhood in the Virginia suburbs of Washington D.C. His interest was toward computer programming was spurred on by the Amiga 2000 computer that he got following which he took programming classes in Turbo Pascal (a software development system). He did become a programmer and one of the most sought-after ones at that.

Possessed of the lineage that he did, Stoppelman got a bachelor’s in computer engineering from the University of Illinois in 1999. He also completed one year of the M.B.A. course he had enrolled for after quitting PayPal (when it was acquired by eBay) – which would remain incomplete till date as significant and better things took shape in the young engineer’s life, and he would remain (as on today) a Harvard drop-out.

His first job after graduating was with @Home Network, where he worked for about four months as there came calling an offer from Pay-Pal (it was ‘X.com’ when Stoppelman had joined). He did well enough as an engineer at PayPal to be eventually promoted to the VP of engineering position there. This is where he also got acquainted with PayPal’s co-founder, Max Levchin – who would go on to do the initial funding for the inception of Yelp.

Stoppelman left PayPal when it was acquired by eBay in 2003 and enrolled for a Masters course in business management at Harvard Business School. But, as things would have it, he did not return to Harvard after the summer’s break. Reason: He and his ex-colleague at PayPal, Russell Simmons, joined hands – encouraged by their ex-boss (at PayPal) – Levchin, to come up with the next big internet idea.

While it is difficult to say what motivated him the most, it could be safely said that the philosophy that he follows “life is very short and you have to make the most of it” is what drives him on in his day-to-day endeavours. This realization was a result of a great loss he suffered – the loss of his elder brother, Andy (2 years senior to him) of a rare heart-rhythm disorder on the eve of his high school graduation in 1993.

But his entrepreneurial spirit had started to surface much before that. He opened a Schwab account when only 14 and invested in stocks with money earned by mowing lawns. The zest towards enterprise activity may have started even before that, perhaps – he himself says that as a kid he harboured the fantasy of starting a company. He looked at the entrepreneur column in Forbes every month and thought, 'I want to be that guy.'" Words of a true visionary, indeed!

And so it was – he became ‘that guy’ more by co-incidence that by design. When he and his future partner exited PayPal – they did so with some sound backing – financially, and otherwise too. Further, since Stoppelman also wanted to be a businessman, he took a break from professional life to learn and hone business skills et al from the Harvard Business School.

But then, the entrepreneur in him was growing restless even as he had just barely completed one year at the B-School. During the summer-break, he teamed up with Russell Simmons yet again (after their stint together at PayPal) egged on in no uncertain terms by their mentor and ex-boss Levchin – who pitched in with a $ million dollar funding for an incubation project.

They hit upon the idea to create a search engine on the theory of “local” when one of them needed to see a doctor but couldn’t find anything worth-while on the net. Thus, the idea germinated in their fertile minds what if there was a service which people could use to search stuff which was reviewed and authenticated by actual users/end-customers.

Once they zeroed in on the concept, they slogged it out for about two months on ideation followed by three months or so to build the algorithm that would help San Francisco residents to find “local’ services with reviews --- more like word of mouth local recommendations, beyond yellow pages. And with that the mission to connecting people with great local businesses took off.

But, it did not achieve instant success – the idea of focused on asking friends for recommendations – was flawed to some extent. They changed it to whatever it took and, although revenues didn’t ring in for the next one year, the idea clicked among consumers – which is what they had been aiming from the on-set. Monetizing would happen a little later as Yelp continued to serve customers by helping them great local businesses.

Once the success of Yelp in San Francisco was proved, it was now a question of whether it can work elsewhere in the country and the world. Thus, Yelp was rolled out in Boston, followed by Chicago, then Los Angeles and New York. They complemented their expansion with a novel concept called "Yelp Elite Squad," where the most prolific Yelpers were invited to social events. The gatherings, held sometimes once a week at bars and restaurants, turned an online experience into a community of like minds.

It spread like a movement across 17 countries serving locals’ needs from local businesses, and in the processes becoming an estimated $2.9 Billion dollar company – now a well established listed company.