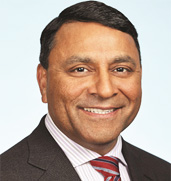 Few CEO’s would accept a job where three previous ones were shown the door in under 2 years. However, Dinesh Paliwal is not among those. He accepted the leadership position at Harman International even as the company was in dire straits with costs running haywire, a dwindling products line and a shrinking client base.

Already having a storied career at ABB, Paliwal accepted the top job at Harman International as a challenge to revive an iconic company hurtling south and transformed the company from a founder-run, top down culture to one that is customer-centric and innovation driven, including building a diverse board and strong leadership team, expanding the company’s business in high growth emerging markets and instituting best in class operating processes that have resulted in top- and bottom line growth.

So the foundations for brilliant career were well and trully laid:

Dinesh C. Paliwal served as a President and CEO of Harman International since July 1, 2007, and was appointed Chairman on July 1, 2008. He led several significant change initiatives at Harman and instituted numerous programs to simplify & strengthen company’s operations. To put the company on a profitable growth trajectory, he transformed the entire company culture from scratch and launched STEP Change Program in mid 2008 so as to introduce best in class business processes which delivered an unprecedented US $ 400 Million in sustained cost savings.

Dinesh has worked in 6 countries and and lived in 4 continents, including United States, China, Switzerland, Singapore, Australia, and India, learning the importance of different work cultures, ethics, discipline and focusing on deliverables. Prior to joining Harman, Dinesh spent 22 years with ABB Group, where he last held the dual roles of President of ABB Group with responsibility for the company’s global P&L, and Chairman/CEO-ABB North America. He eliminated cultural and organizational silos among multiple P&L operations globally to achieve profitable growth for multi-billion North American operations following 18 years of losses.

Leading Harman since 2007, Paliwal acted as veteran of the corporate turn-around, who earlier proved his determination at Swiss-based automation provider ABB. Paliwal has overseen development of Clari-Fi, a technology that restores nuances that get lost when music is digitally compressed. Strong demand from clients like Ferrari, BMW, Audi and Chrysler turned Harman into a Wall Street Darling, beating analysts’ earnings estimates 7 quarters in a row. Business grew so fast that Paliwal announced US $ 500 Million share buy-back over the next 3 years.

To bring the company on lucrative path, he transformed company’s culture and launched best in class business processes which delivered an unprecedented $450 million in sustained cost savings. He indentified areas of overspending, placed several processes, as a result brought costs drastically down and heavily invested those savings into company’s R&D in order to deliver on complex projects.

In 18 months, Dinesh built team from scratch. Except for one person, every other person came from outside in order to have a global team. They have a whole new mindset: cultural diversity, different needs & new consumer insights. He recently launched first social-networking technology that serves to warfare drivers’ distraction, meet auto regulations and bring 4G smartphone functionality to the car.

Dinesh with his pioneering leadership, took Harman center stage at the Grammy Awards and on American Idol, where its systems were featured. BMW, Mercedes-Benz, Toyota, and GM rely on Harman, too. A recent core development was Quantum Logic. Harman developed an algorithm to sit on top of compressed music and recreate its profile. Paliwal has cheerfully driven a boom to new technologies and created new solution concepts. Cloud, Connective Lifestyle, Signal Processing and Mobility are areas where Harman has taken a deep dive.

Harman has recently introduced diverse products and technologies, including timely initiatives as its energy efficient GreenEdge Technologies, new acoustics-sound management solutions for electric cars, and a new scalable automotive infotainment system. Dinesh thinks that his global exposure has educated him on importance of work cultures, ethics, discipline, a sense of purpose and focus on deliverables. Whether its food, music, or cultural values, he has a deep appreciation for global diversity, and this is a quality he looks for in his senior team as well.

Dinesh is married to Ila, a renowned Hindustani classical vocalist and philanthropist & have two children Shriya and Aasheesh.