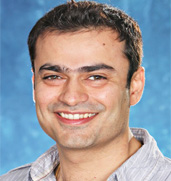 Opportunities most often come packaged as problems — the bigger the problem, the higher the potential of the opportunity’ - is the mantra that drives Ashish Kashyap, the young, energetic, sporty, and highly successful CEO of the Group. Ever since it started operations, Ashish has lead from the front and has taken into his stride all the adversities that confronted him. This has only helped inspire people – both within () and without. The man’s marathon 19-hour-day is full of action (sleeps at 4 a.m. & wakes up at 9 a.m.!) – beginning with sports as he is a very enthusiastic squash player, drives the 10-minute distance to his office from home, plans for the day and, perhaps, ends it with the thought as to which horizon to scale next – all this with the primary intent of creating value for customers

The 39-year old, who is very much into river rafting, movies, music, and travel, has in his relatively short entrepreneurial life, seen almost everything that the so-called new media in India had to offer – internet, mobile, radio, and even television! With passion being his biggest strength, he continues to chip away. That is why perhaps, he almost detests people who are afraid of failure

He holds a Bachelor’s degree (Hon.) in Economics from the University of Delhi and a diploma in International Master’s degree in Practicing Management (IMPM) from INSEAD, Fontainebleau, France.

Kashyap started his career as the general manager (e-commerce) at Indiatimes.com, where he built and architected several innovative applications (e-commerce applications and businesses) for the portal ranging from online auctions and travel to shopping - most of them were first of their kind in the industry – and he drove them to a profitable and scalable position.

Then came the big exposure to internet and its capabilities when he joined Google. He was the country head, India sales and operations, and was instrumental in the domestic business operations for the company

An Apple aficionado - Apple MacBook and Apple TV are his , Kashyap firmly believes in letting consumers unlock great value out their experiences – be it gaming, socializing or, ticketing and booking. The two professional stints afforded him the luxury of gaining huge insights to explore his entrepreneurial bent as well as exposed him to two of the best practices that were going to grow big, really big. That, in the process, opened up his mind for the innumerable possibilities the internet would present to him – especially in a country like India whose net density was improving by the day. That besides the fact that the demography of India had a greater chunk of children and youth in it, gave vent to his vision: That digital economy is going to be the order of the day to which social network games brand on and mobile platforms would contribute greatly!

The man who had dabbled into radio and television (as an actor) wasted no time in making good of this opportunity to tap into the (potentially) billions of dollars market.

The company & its success

The period when he was contemplating to throw caution to the winds and let the entrepreneur in him fly, was a period of transition, perhaps transformation even – for the online space. The power to create content and applications to let them be consumed by consumers had shifted hands – it was now with the consumers who had started to decide what to see and where to see and how to consume. Then, there was the concept of bonding with an online brand – which was also defined by the customers themselves

Thus, when Kashyap bid adieu to Google, his last employer before founding , and launched in January 2007 - he named it “” which apparently comes from “ build” & “ bond”). In the 7 years or so since, has emerged as a fast-growing, social network games brand on internet and mobile platforms

It started as a social network; then pivoted into games, and again into e-commerce and transactions. Realising that experimentation, trial and error are the key tenets of building internet businesses, he experimented with Goibibo (India’s leading B2C Online travel aggregator) – which worked well and grew very fast

The company with a philosophy “enabling trusted transactions” ventured into many areas such as travel -redBus.in (# 1 online bus ticketing platform) & YourBus.in, ( has 51% stake in the leading B2B online travel platform), TBOGroup; PayU India (The fastest growing payment gateway in India); (mobile & location-based marketplace - one of the top ranked shopping apps on Android, Windows and iOS), gaming ( games), and One Family, etc.