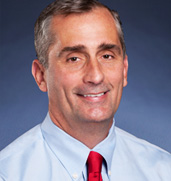 Brian Krzanich’s elevation to the top post followed what has been the pattern at Intel since its inception in 1968 – he is one of the six CEOs of the company – all of whom have been chosen from within its ranks. Yet more con-incidental is the fact that his two predecessors also served as COOs before being elevated to the CEOs post. Whatever the contention of naysayers and those who consider that an outsider would have brought fresh perspective and ideas to the semi-conductor giant, it can be safely said that Krzanich has made all the smart moves so far – only time will tell whether or not he will justify the board’s decision. But we need not wait until briefly chronicle this geekish leader’s journey so far – which has spanned more than 30 years (33 to be specific) – all of it at Intel. Throughout this long association with the company, which started with him taking up the job of an analytical engineer at one Intel’s New Mexico units to assuming responsibility for his first factory in Chandler, Arizona, and then to becoming in-charge of its global network of factories and its supply chain to COO and to finally become the CEO of the world’s largest semi-conductor maker – is quite a journey, very little spoken of, though. But the signs are ominous with inventions such as the drone and the RealSense camera that allows users to take a picture of someone and it will automatically create a video game character that mimics their entire body, show that Intel under Krzanich has stepped up the game in its ability to bring innovative products to market faster.

Here is a further peek into the man and his life, and him at Intel.

Born on May 9, 1960, Krzanich – known to have a Croatian heritage- holds a bachelor's degree in Chemistry from San Jose State University and has one patent for semiconductor processing.

Rise through the ranks and Ascent to the pot

Right since he joined Intel, he has on the company’s functioning in his own way. But when leadership roles came calling, he didn’t shirk away. Instead, he grabbed the opportunities by the scruff of their necks and made sure he made the best sue of them – both for himself as well as the company.

As we have seen above, although not tempered to take up leadership roles in the traditional way – Krzanich has demonstrated utmost leadership through the several major initiatives he has taken ever since he had a sniff at leadership – from the day he took over the reins (so-called) of Intel’s Chandler (AR) factory and, the plant and manufacturing manager roles at multiple Intel factories and right up to him becoming the COO and the last two years or so since taking over the top-spot which was held by Paul Otellini.

An open-minded approach blended with customer-centricity have not only allowed him to extend the company’s product and technology leadership but also rake in the moolah (yeah, & billions of them in value!).

All that was possible though his initiatives that lead to a broad transformation such as Intel's factories and supply chain, improving factory velocity by more than 60 percent and doubling customer responsiveness. Then there was his involvement in advancing the industry's transition to lower cost 450mm wafer manufacturing through the Global 450 Consortium as well as leading Intel's strategic investment in lithography supplier ASML.

Shaking-up the company's factories and supply chains, eventually increasing output and lowering costs for the company

Involved in Intel's investments in outside companies and Shifting company focus to more efficient processor manufacturing It wasn’t like he got up there just like that. Imagine one coming from a purely technology background tasked with leading 50,000 employees encompassing many of Intel's businesses, processes, & department such as Technology and Manufacturing Group, Intel Custom Foundry, supply chain operations, the NAND Solutions group, human resources, information technology and Intel's China strategy. If he hadn’t had it in him, he wouldn’t have taken on the challenges and excelled

Thus after progressing through a series of technical and leadership roles, Krzanich was appointed chief executive officer of Intel Corporation and elected a member of the board of directors on May 16, 2013.

Brain is known to visit Intel-sponsored Hackathons and Best-buys with his wife and two daughters – typical geek, isn’t it? Well that, kind of, throws enough light on the man he was, is and, his capability.

Member of the board of directors of the Semiconductor Industry Association.