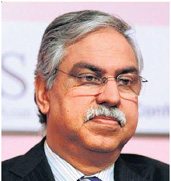 Hero MotoCorp has been associated with sports, and particularly cricket, for well over two decades...

The scion of the BL Munjal family is so conspicuously away from the media limelight that people tend to forget the fact that he is been there on the company ranks since more than three decades, and has had an impact on the company and its functioning (to the extent he was entrusted with the responsibility) in his own way. Perhaps it could be the towering personality of his illustrious father and family patriarch, Brijmohan Lall Munjal, which overshadowed everything else or may be it was the father himself who wanted to pave the way for the next generation when the time was ripe and was, hence, waiting for the right moment. Whatever the being reason for his relatively introverted self, Pawan Munjal – current Chairman, MD, & CEO of HeroMoto Corp, has been well and truly involved in making the company the world’s largest two-wheeler maker (units sold)– inspite of the separation from erstwhile partner Honda.

That in itself is a vindication of the visionary and leader Pawan Munjal is, because when the company parted ways with Honda, the big question was how they will augment their business with the requisite technology. But Pawan, along with his brother Sunil, had very meticulously charted the path for HeroMoto Corp’s future – which has shaped up brilliantly since the time it went solo.

The third child of BL Munjal, Pawan Munjal spent most of his childhood in Ludhiana before his family was forced to set shop outside Punjab – which it did in Haryana, and as a result, Pawan did his Mechanical Engineering from Regional Engineering College, Kurukshetra, Haryana (India). He is married and has three children.

Pawan Munjal had seen how the company, under his father’s able leadership, had pioneered the motor-bike phenomenon in India in the 70s & 80s. The company, first set-up in 1956 (officially) by BL Munjal and his brothers was also the first in India to set up a cycle manufacturing plant.

So, Pawan Munjal did not require looking outside the family for inspiration. His father and equally shrewd & enterprising uncles would provide him with immense inspiration.

Pawan Munjal joined Hero in Director in 1984 as a director and was soon welcomed with a huge success of their motor-bike model. It was both the product as well as the marketing that did it for them. So, Pawan got a taste of what it takes to set one apart – the same astuteness stayed with him ever since right upto his ascension to the top post of the company much later.

Munjal was elevated to the post of Managing Director and the CEO of Hero Honda Motors (now HeroMoto Corp.) in 2011 – a year in which Hero became the world’s largest two-wheeler manufacturer (by volumes). He used this opportunity to hone his leadership skills further and excelled at it – evident in the fact that ever since he became the MD &CEO, Hero has held on to the top position for 14 consecutive years.

Around 2007, he brought together 40 executives from the Hero Group to plan new business opportunities. A consultancy was engaged to prepare a report on the Indian auto industry. This was to help Pawan & the soon-to-be HeroMoto Corp immensely. This was a master-stroke as it proved to be a blessing in disguise for the company, especially in view of what was to ensure vis-a-vis the partnership with Honda. Signs of an emerging visionary were there for all to see, and with his role increasingly having impact on the company’s fortunes, Munjal seemed ready for the elevation to the top-post, which was held by his father, surprisingly, even when was well past his prime (was 92 when he relinquished it to make way for Pawan Munjal).

Perhaps Pawan Munjal had seen it coming all along – especially since he himself wanted the company to break-away from the joint venture and progress on its own – as mentioned (above), he had set plans in motion so that the company is not jolted a wee bit as and when it happened.

As things would have it, it was to remain a question of only when as, after almost two-and-half-decades of association with Hero, Honda decided to itself introduce a 100cc motor-cycle into the Indian market. Instead of sending shock waves amongst the members of the Munjal family, Pawan Munjal thought as indeed his father and brother Sunil, this presented them with a window of opportunity.

Pawan always believed that the joint-venture constricted them to do business in regions/countries where Honda had a presence and stunted their growth. It could neither have its own R&D center nor build an international presence. Another aspect that was pinching them for years was the royalty it had been paying to Honda – around 540 Crores every year.

In view of all these, the idea of separating from Honda took shape firmly and, accordingly, the family decided to buy off Honda’s stake.

The shrewd brothers, Pawan & Sunil, worked out a formula which proved to be very beneficial for the Munjals. They bought the entire stake of Honda (26%) at half the prevailing market price (reported to be in the region of Rs. 3,841 Crores). That besides, they pulled an ace yet again when they convinced Honda for a fixed quarterly royalty of Rs.187 Crores – irrespective of the sales.

The separation happened in 2011 and, with all the shackled of the JV broken and lesser royalty burden on the company, Pawan along with his brother had facilitated the realisation of the aspirations that they had for years – of going overseas.

Then, to be able to make things easier for the new-look company, Munjal put to work some 250 engineers on research and development to see it through the tough times in terms of technology – which was expected to create some trouble for the company after parting ways with Honda.

Thus, Munjal has successfully overseen the company's successful transition from Hero Honda to Hero MotoCorp in 2011.

Ascent to the pot

As a prelude to what all he could do as and when he assumed responsibility of the top post, Munjal kicked-off a slew of measures and initiatives. But for Pawan Munjal, it would have been difficult for HeroMoto Corp. to recoup and stabilize after breaking away from the JV. One cannot miss the man’s foresight, shrewdness, and the quest to take the company to the top amid mounting competition, including from its erstwhile partner.

Although the ascension was some still distance away, Pawan Munjal did all he could to consolidate the position as well as power it to successful expansion and growth in areas outside its regular bastion, India.

After successfully orchestrating the split from Honda in 2011, in early 2012 he started working on acquiring stake in its US-based partner, Erik Buell Racing (EBR). By July 2013, Munjal had overseen the now re-christened (to) HeroMoto Corp make its first overseas stake acquisition. The company bought 49.2% stake for a reported US$25 million. This was reflective of the company’s strategy to position itself as a global two-wheeler major.

As they had been contemplating all along, the Munjal brothers, helped by their father and the trust and confidence of the new board, continued to strengthen the company with a spate of expansions outside India including those in Africa & Latin America complemented by the introduction of new models and remodelled old ones. Hero Moto-Corp has a global presence in more than 22 countries across Asia, Africa, Central and South Americas including markets such as Peru, Ecuador and Colombia in South America; Guatemala, Honduras, El Salvador and Nicaragua in Central America, and Kenya, Mozambique, Tanzania and Uganda in East Africa.

The hard-work and leadership demonstrated by Pawan Munjal through the potentially turbulent times after the split with Honda, saw him elevated to the post of Vice-Chairman in August 2014. Thus, the writing was on the wall and, it came in June 2015. Pawan Munjal took over as Chairman of HeroMoto Corp starting 1st June 2015, in which position he would continue to take the company forward the right direction and achieve the goals it had set for itself after breaking away from Honda.