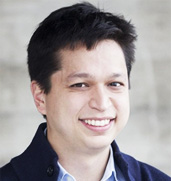 An incredibly bright online media savvy and an American internet entrepreneur, Ben Silbermann is the of Pinterest which is a virtual pinboard which allows its users to share and organize links, recopies etc. It is a website which allows users to manage and also create various theme based collections which are called as pinboards. Ben co-founded the site along with Paul Sciarra and Evan Sharp.

His employees and all the people around him term to be polite and sincere and a mild mannered man. He is certainly not the man whom you can pick from the crowd and his hard work speaks in the success of Pinterest which is gaining more popularity than Facebook and Twitter. Though he is seen tweeting on twitter.

Ben Silbermann was raised by his parents in the city of Iowa at Des Moines. He was born in the year 1982 to his parents Jane Wang and Neil Silbermann, who are both ophthalmologists and they held a family in the same city. Ben Silbermann’s mother is known to be one of the most active on Pinterest and has about more than a million followers.

Ben Silbermann, the and the CEO of Pinterest started his career working with Google before launching Pinterest in March 2010.

During the start of the career Ben was also taken into Yale and spent about two years by taking science classes. He spent his last year of college by applying for some consultation jobs and later joined the Corporate Executive Board, a large Washington, D.C., management consultancy. He worked with the online advertising group of Google and later left the organisation to start developing his own iPhone applications with Paul Sciarra who is his college friend. Their first application, which was a shopping application named Tote did not gain the expected traction. While he was still struggling with his application Tote, Ben happened to meet up Evan Sharp who had similar ideas like Ben and they started working on their new venture.

The co-founders then went ahead and teamed up with Evan Sharp and created a pin board product which went ahead and got to be named as Pinterest. As per Ben Silbermann, the thought of Pinterest came from his love of collecting from the time he was a kid.

Ben Silbermann co founded Pinterest with Evan Sharp in March of 2010. He stated that the thought of developing a pin board came from his interest of collecting things from the time he was a kid. He said that, “Collecting tells a lot about who you are,” and he mentioned that there was so such place to share that specific side of who you are. That is how Pinterest came up.

After the failure of his first shopping app, Tote, Silbermann bonded with Evan Sharp who was a student at the Columbia’s Graduate School of Architecture. They both had one thing in common which is infographics and they started collecting and working on the idea with Sharp.

As per Ben, "Most people don’t have anything witty to say on Twitter or anything gripping to put on Facebook, but a lot of them are really interesting people." He adds on that, “They have awesome taste in books or furniture or design, but there was no way to share that."

In the very first to go Pinterest would certainly look like any other social media website where we find people sharing images and commenting on them, but what makes the difference is the design which was the choice of Ben and his co-founder Evan Sharp. The design of the site is based on the new way of browsing which is quite different from the way other websites dispense their content.

During the launch of the new applications for iPad and Android, Ben declared a complete lockdown and had ordered about 35 of his employees to income as early as possible and they even stayed late to complete the applications. The main goal behind this was Stoke growth.

Pinterest is now known to be the fastest growing website in the history. It was in January that Pinterest had crossed the mark of 10 million unique monthly visitors only from the United States. By April, the figure has doubled and more and more people started using Pinterest from across the World.

With many more changes to the design and the lot of more Pinterest is really going to be the next big thing in social media.

Ben Silbermann is born in a family of doctors. Both this parents run an ophthalmology practice and even his sisters are physicians as well. Ben Silbermann is married to Divya Bhaskaran and the wonderful couple and they are blessed with a Son, whom they named as Max. For Ben Silbermann, things were really not easy from the start. As a guy he runs one of the most beautiful website and he says he works from 7am from mornings and works till dinner at a stretch. He has his only respite which comes from his new born kid, Max.