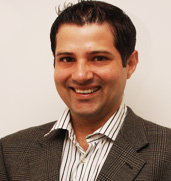 Some ignited soul has rightly said – success is how high you bounce once you have hit the ground. Likewise, one’s true fabric is tested under trying so it was tested of Ashish Hemrajani, one of the young Turks of the Indian eCommerce industry. For someone who had put his career at stake to see his vision come true, it was easy to set-up shop but mighty difficult to sustain in the midst of two so-called bursts. But Ashish Hemrajani and his vision, both withstood the test of time and the circumstances on both occasions, to come up trumps. A sailor by passion, he knows it pretty well on how to ride the tide!!

Today, Ashish Hemrajani’s brainchild is valued at a whopping Rs.2000 Crores, with 1 billion page views per month and about 50 million plus unique visitors to the site BookMyShow – India’s biggest and online movie and events ticketing brand reaching out to 800 – 900 cinemas in more than 200 cities and towns of the country. That’s not all - almost 60% of its transactions take place through the mobile app of BookMyShow – considered to be one of the most successful mobile eCommerce apps in the India. In fact, BookMyShow mobile app is such a hit that it became one of the first digital commerce companies to match-up and, even outperformed its global peers - in terms of consumer adoption of the offering on the mobile medium.

BookMyShow occupies almost 85 to 90 % of the online market with about 70 % of its sales comes from movie tickets, and the remaining from sports, plays and live events. And it’s still going strong and if the founders are to be believed, they are hoping to hit ambitious 100 million tickets a year by 2017 – a figure that they were able to achieve in 7 years since the day of its inception!

Born & brought up in Mumbai (Maharashtra, India), Ashish Hemrajani had his schooling from the Maneckji Cooper Education Trust followed by his graduation from the Mithibai College and subsequently, completed his MBA from the Sydenham College of Commerce and Economics (Mumbai University) in 1997.

Right after finishing his master’s in business administration, Hemrajani’s only professional stint came when he joined ad maker J Walter Thomson, where he worked for about two years.

Hemrajani was and still remains a big Apple and Steve Jobs fan. He considers Jobs to be one of his inspirations. So it isn’t surprising that how the idea to set-up a company to provide cutting-edge digital solutions to the industry in India, sprang up in his young mind. It is said that Hemrajani was on a vacation to South Africa in when he stumbled upon the idea to set-up a ticketing service in India. Apparently he was listening in to radio backpacking under a big tree. The programme he was to was promoting rugby tickets. The idea stayed with him and lingered on his mind throughout the vacation – even while he was indulging and extracting the most out of his vacation. By the time he was ready to and leave for India, he had made up his mind on what he was going to do when he landed in the country.

Ashish Hemrajani wasted no time after returning to India from his much enlightening vacation in South Africa. He promptly quit his job at J.W. Thomson and set-up his own company in 1999, naming it “Big Tree Entertainment” – after the tree under which he was enjoying his time during the vacation. Thus, bringing the concept of online movie ticketing to India.

It did OK for a year or so when the first bubble burst. And with it, almost everything came apart. There were frustrating but there was no way Ashish was looking back.

The period during 2000–2006 was one of recouping and picking up the pieces and putting them together for Ashish Hemrajani, which he did by doing sundry things such as running and developing software for cinemas. Around 2007, he sensed a revival in the consumer market in the country and decided to re-launch the services of Big Tree Entertainment with a new name and fervour.

He brought in his friends & at the Sydenham College of Commerce and Economics, Parikshit Dar and Rajesh , asking them to quit their respective jobs and join hands with him. He convinced them about the idea and its future – it was to be the first online ticketing platform in the country, so they saw a great window of opening up.

The three of them, Ashish Hemrajani, Parikshit Dar, and Rajesh – launched the portal , rechristening it “BookMyShow.” It took of quite well what with the country seeing a spike in net density as well as technology adoption, a good chunk of movie-goers across the country liking the idea of not having to struggle in the long and unending queues near the booking counters in cinemas.

A year into the re-launch of the service, Ashish faced another crisis or the bubble in 2008. A seemingly global threatened to take down the company, sweeping it in the high currents of jobs cuts, unemployment and so on. But, this time round as well Ashish stood firm, implemented austerity measures, pay-cuts (not retrenchment) and such actions to the threat from the ongoing economic crisis.

A year or two after the 2008 global financial crisis, Ashish and co., were well and truly into . Now it was time to shift gears and take the company into acceleration mode – which they did by doing a right things such as bringing in investors to support ramp-up and expansion, offered the services through mobile – which catapulted them to the top of the Indian eCommerce Industry.

The going mobile-also strategy worked wonders for BookMyShow with the advent of affordable and internet providers enabling the portal to offer its services in un-catered areas of the country such as tier-1 and tier-2 cities, and many towns where mobile internet was picking up.

The growth of the company is attributed as much to the flair and vision of its founders as it is to the people who make it. The trio greatly value the team that they have been successfully putting together even since its inception as indeed growth to seven or eight offices across the whole country.

That he is fiercely competitive is beyond doubt. But, just to make it more evident, Hemrajani indulges big time into competitive sailing which he gets into every Saturday and Sunday between October and April every year for the last decade. He is a member of the Royal Bombay Yacht Club, Bombay Sailing Association and the Colaba Sailing Club.