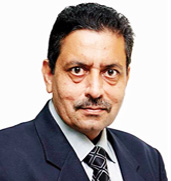 In every business plan we have shared with him (Aditya Birla), we have overachieved. And we have also achieved his goal of being in the top three...

A solid educational grounding, varied exposure across verticals, learning it the very early in his journey as a leader in the telecom sector besides his pet interest – playing Bridge - is a true manifestation of the fact that education, hard-work, perseverance, and an enterprising with a passion to excel will stand you in good stead – no matter what background you are from and which profession of business activity you are in.

The man has also displayed great skill in reversing some to telecom entity (called Birla AT&T - formed by a JV between Aditya Birla Group and AT&T) in the early cellular days in India and helped Idea Cellular (as it was renamed to in due course) stay well and truly afloat amidst intense competition. Under his leadership and able guidance, Idea Cellular has grown to a GSM subscriber base of around 140 million with a market share of about 17% and revenues of US$5Bn. His efforts have won him respect and appreciation from people both within and without the telecom major.

Born in 1952, Himanshu did his schooling in Delhi where he developed a passion towards sport very early in his life. As child he played tennis - that is where he has derived his competitive spirit and stamina – which have helped him persevere in times of despair – such as the one mentioned above.

He enrolled for a Bachelor’s course in Electrical and Electronics Engineering from the Birla Institute of Technology (Mesra) in 1979. After completing degree in 1983 and after a handful of professional stints with the likes of Toyota, he enrolled for a Master’s degree in business management from the famed Indian Institute of Management (IIM), Bangalore in 1988.

His decision to do management course proved to be decisive as his time at IIMB provided him the platform where he, obviously, added a lot of business skills to his persona. Besides the education that groomed the astute business leader of the future, there was something else that helped shape the entrepreneur he was going to be. And that was the game of bridge: it not only helped Himanshu solve academic problems and understand people but has also let him hone his business skills and equipped him with the ability to see through things – which qualities he would use to great effect in his professional life as well.

After finishing his graduation, he joined DCM Toyota as an engineer. He subsequently went on to become a Senior Manger Sales which was, although a digression from his chosen field, a beginning for him in the marketing field. It was all culminated by his stint with Toyota Japan where he was sent for training. Once back from Japan he was moved to the sales department, posted as manager in-charge of south Karnataka.

There was no looking back after that for about 4 years during which period he acquired enough sales and marketing perspective to take flight in the bigger space. Followed by this, he had a brief stint with HCL.

As a logical move up after his tryst with marketing, he joined Idea Cellular (Birla AT&T back then) in 1997 and was assigned with the responsibility of managing the company’s Circle Operations in the service areas of Maharashtra and Gujarat, and later launched services in Delhi Metro.

During his tenure of 6 years at Idea, he witnessed two-player fixed licenses fee regimes, of NTP in 1999, the fourth license auction in 2001 and launch of CDMA services.

Sometime during his time at Idea (around 1988), he enrolled for a course in business management from IIMB (which he would go on to complete in 1990).

The initial stint with Idea was as eventful as well as an educative one for . In the year 2010, as part of shouldering the responsibility of managing the Circle Operations as Chief Operating Officer of the Gujarat telecom circle, he had to take a call on the tariff (pricing) of call rates and he took a contrarian one. As opposed to all others who realised the price-sensitivity of the service which hadn’t yet caught on with general public hence kept it competitive, believed that customers would be willing to pay a premium for services provided by a joint venture of Aditya Birla Group and AT&T. The move didn’t work and had to go re-visit the pricing strategy to correct this aberration.

Disappointed though he was, but the Gujarat Circle fiasco made him richer by experience. It made understand how crucial the customer pulse is for any business. This understanding was to serve him well in the times to come.

The advent of many big-league companies trying their hands in the hereto state-controlled telecom industry opened up umpteen opportunities for any aspiring professional whose careers had just begun to bloom. In line with the same, and with the experience gained at Idea (during his 1st stint of 6 years there), joined Reliance Infocomm Ltd. in the year 2003.

At Reliance Infocomm where he worked for three years as Chief Executive Officer, was responsible for its operations in the northern region covering Punjab, and Himachal Pradesh.

returned to his bastion (so to say) in 2006, rejoining Idea as COO – this time round assigned the responsibility of managing the business in southern and western India. He didn’t let down the company and the management which had reposed so much faith in his capabilities. was instrumental in driving the company’s growth in the two regions assigned to him.

was also responsible for strengthening Idea’s dominance in established service while also launching services in new service areas and expanding brand presence in other major markets in India.

It is said that success follows success, and so it did for . Along with the company’s growth, career also began to take flight with each success that the company had. In five years time since rejoining, had demonstrated great leadership qualities to shepherd the company amidst fierce competition and delivered results – from a company with lean resources and losses booked to one of the leading service providers. There were enough for the powers that be at Idea to spot the potential and delegate him greater responsibilities.

And so he was elevated to managing director position in 2011. In four years since, the company’s has grown from strength to strength to become India’s third largest telecom services provided. Kapania had managed to consolidate Idea’s position ¬- there is a huge gap between the 3rd placed Idea and the next ranked provider – in terms of subscriber-base, market share, and revenues.

In what could be considered as a recognition of the hard-work and business acumen demonstrated by Kapania in almost reversing the decline in Idea Cellular’s fortunes, Kumar Mangalam Birla (Group Chairman, Aditya Birla Group), announced his induction as a director into the Aditya Birla Management Corporation Ltd., a sort of think-tank made of MDs of group companies which oversees and formulates group business strategy.

The company’s has registered continued growth and expansion under Kapania. Today, Idea is a pan-India integrated GSM operator with its own NLD and ILD operations, and an ISP license. What’s more, Idea now ranks among the top 10 country operators in the world with traffic in excess of a billion minutes a day, operating across all 22 service areas with 2G services and 3G services spread in over 3,000 towns and 10,000 villages. Idea has grown the fastest in the world's fastest-growing mobile phone services market.

While there is sustained and almost relentless pressure on the likes of Himanshu Kapania to perform even in the face of innumerable challenges such growing number of operators and providers, changing customer preferences and consumption patterns, pricing, regulatory issues, and unending need to satisfy customers, from his past record of facing and overcoming hurdles and converting them into opportunities, it can only be expected that the growth story of Idea Cellular will be long told in the many years to come.

Given the turn-around achieved by Kapania, it would be worthwhile to know who all his role-models were. Although himself very good at planning and understanding, and possessing great knowledge of the telecom network, Kapania says he learnt telecom regulatory affairs and policy from his predecessor Sanjeev Aga, from whom he also picked up the trait of being a risk-taker. From the Ambani brothers, especially Mukesh, he learnt project management and how to scale business.

He looked for pockets where voice offerings were underpenetrated. That is how he shifted Idea’s business focus to rural India and continued reliance on voice services at a time when the competition was focussed on mobile data as their growth drivers. The effect can easily be seen: In 2011, Idea's presence was only in 80,000 villages. It now covers 350,000 villages.