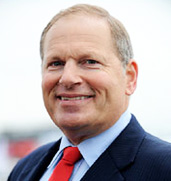 A CEO who looks like something out of Silicon Valley, An independent thinker who’s the anti-thesis of a slick, pre-packaged CEO, A relentless leader who is also a workaholic,are some of the phrases used while referring to David M. Cote , the CEO of Honeywell. And they are said not for nothing: Cote orchestrated one of the greatest corporate turnarounds in contemporary corporate American history. Not only that, Cote succeeded in transforming the company into a technology company with strong growth. What’s more, he has also overseen the company making 70 acquisitions and shedding 40 businesses along the way and he is still going strong.

Born on July 19, 1952, Cote grew up in a New Hampshire mill-town named Suncook. His father had an eighth-grade education and ran a garage. When he completed high school around 1970, he didn’t look to pursue higher education like others his age would – despite being good at mathematics. Instead, he chose to experience life and learn from it. So, he drove to Michigan on his 1963 Pontiac Green Catalina which he had bought for around $400, and started his work-life as a car washer and a carpenter’s apprentice.

If that is amusing enough, around the time he had signed up to join the navy but didn’t owing to a change of mind –in a reverse of sorts, he decided to join college. He enrolled into the University of New Hampshire (UNH) at Durham for a bachelor’s degree in business management. In yet another queer decision, he bought a lobster boat and undertook the chores of a cod fisherman. But it didn’t work out the way he had thought it would.

The workaholic in him was kept lurking around even while he was still at the UNH – apparently, he worked at nights at the nearby General Electric (GE) plant as an hourly labourer. He completed his graduation from the UNH in 1976 at which point he was again at the cross-roads of life – it was open all over again for him to explore, learn, live, excel and, make an impact on others’ lives too.

Right after graduation (In 1976), Cote got a full-time job at another GE factory in Massachusetts. This time round, though, as an internal auditor. Not long after, as a logical progression, Cote rose to join the GE audit staff. His keen, calculative and hard-working persona was to stand him in good stead in the future at GE where he continued to grow during all of the mid-1980s – rising to the position of a financial analyst at the GE headquarters (Fairfield, CT).

The defining moment that sparked it off

Sometimes seemingly bad situations turn out to be fruitful. But, for that to happen, a certain degree of calibre, unflinching self-confidence, and strength of character are required. Thus, possessing all of those, Cote grabbed the opportunity by the scruff of its neck when he had so inadvertently found himself in a bit of a soup.

This is how it said to have happened: In the year 1985, Cote was asked to handle an initiative which included dispatching exhaustive questionnaires about the company’s business metrics to some obscure places of the world. He was summoned by Jack Welch (the then Chairman & CEO of GE) to explain about what he (Welch) considered to be a colossal waste of time.

A lesser character would have sulked and crumbled at the very thought of such a rendezvous – with the most powerful man of the company. But, not Cote. Being the cool, collected and upright self he was – especially having seen so much in such relatively lesser time- Cote owned up to the responsibility of the project. In a twist to the tale, while Cote was anticipating an axe as anyone in his position would, he wasn’t fired. Instead, he found instant liking in the boss toward his straightforwardness, diligence, and obedience (Welch came to know that despite arguing against and opposing the project in the first place, he was true to his job and did what his immediate bosses had asked of him to do).

The confidence, the air of authority, and apparently, his refusal to bad-mouth his superiors - all connived (yes) to get him positive vibes from the boss. So impressed was Welch that, from the chance incident on, it was an upward journey on the management ladder of the company for the now Welch-favourite, Cote.

Cote continued to rise and prosper with each passing year at GE. Along the way, he also learnt some facets of running large conglomerates as in the case when he was made in-charge of the company’s appliances business – GE’s marquee offering. To counter brutal competition (in Cote’s words) and the ever-falling prices, he initiated moving some manufacturing jobs to Mexico and similar places elsewhere which afforded the company cost-economy owing to low labour wages. While the move wasn’t really liked by all – especially the labour unions- it did teach him a great lesson or two besides, of course, saving a great deal for the company.

Almost a decade-and-half into his association with GE, it was evident to Cote that he wasn’t in with a shot for the top-post. Realizing that he had hit the ceiling vis-a-vis succession to the position Jack Welch held, Cote made a move to TRW - an auto parts manufacturer half the size of Honeywell - in 1999 as the CEO in-line. He was indeed elevated to the CEO post for a brief period before his switch to Honeywell.

All along the three years at TRW, the writing was on the wall. The elevation to the CEO post was only a prelude. Cote joined Honeywell as its CEO in 2002 February.

It was baptism by fire for the GE-trained Cote. He inherited a company mired in the criss-cross of conflicting cultures resulting from the merged entities – old Honeywell and AlliedSignal, besides from another acquisition by Honeywell - the freakish Pittway.

The feuding camps weren’t really forthcoming when it came to taking direction from the new CEO. The extent of discord can be gauged from the fact that about one-third of the business heads of Honeywell Europe didn’t show-up to the town-hall meeting Cote had called for to address the situation.

Anyway, the gritty and unrelenting Cote continued with his reforms. To unite the company’s warring factions, Cote also introduced a series of disciplines covering every business – e.g. he dispatched 70 managers to Toyota’s plant in Georgetown, KY., to master techniques for speeding output with the leanest workforce possible. Then, he introduced new practices that shunned some of the old ones such as aggressive accounting, which were critically detrimental to the company. Not only that, he also took some hard decisions like the one relating to the company’s asbestos business and its environmental impact, and the resulting liabilities, or his decision to sell Honeywell’s slow-growth consumer auto businesses (such as spark plugs and anti-freeze) to pour some of the proceeds into enhancing Honeywell’s turbo technology. The last one paid off greatly, as the world’s largest producer of turbochargers, Honeywell now stands to benefit handsomely. Today the turbochargers business is generating around $3.2 billion for the company.

The rewards of such drastic measures meant that in a matter of just a decade, the company was able to turn-around its fortunes. Sales increased by 72% in this time, outsized earnings resulting from relatively flat labour costs – not by retrenchment but soliciting self-imposed work-offs. He also over-hauled the M&A strategy that was in practice earlier; and replaced it with newer and more pragmatic ones. The resulting shopping-spree (around 70) was not only successful but was also fairly economic for the company with none of the acquisitions costing it more than $1.4Bn each.