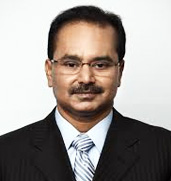 Recognized for being the core team member of Dr. Reddys, G. V. Prasad is the Vice Chairman and Chief Executive Officer (CEO) of Dr. Reddy's Laboratories. Mr. Prasad has contributed considerably to its conversion from a mid-sized conjugal business into a universal pharmaceutical company. he was serving as the Managing Director of Drugs Ltd., which amalgamated with Dr. Reddys in 2001. Mr. Prasad joined the company in 1986 and directed the team that drives strategy, growth and performance. By nature, he is a passionate wildlife and nature photographer.

Mr. Prasad focused on implementation of green technologies and processes by means of sustainable manufacturing practices. Dr. Reddys is focused on accelerating access to affordable medicines and finding solutions for unmet requirements. Dr Reddy's Laboratories may not be making news for big pharma deals. The Hyderabad-based company remains focused on unique product launches in key markets. Dr. Reddys Laboratories has registered a 15.6 per cent decline in its net profit during the fourth quarter ended March 31, 2014, at Rs.481 crore against Rs.570 crore in the year ago period. Total revenue increased from Rs.3, 339 crore to Rs.3, 480 crore.

He has always accentuated on innovation and transparency coupled with set of competencies. He is also known for being more interested in future rather than delivering results in that is may be because of his thinking that results take longer than we expect.

Mr. Prasad has a unique motivational management style with a proven history of building, guiding and retaining high-performance teams to develop and implement strategies for accelerated growth.

Mr GV Prasad is a native of Nellore and did his initial schooling from Vidyaranya High School in Hyderabad, Andhra Pradesh. He later moved to his hometown, Nellore, where he finished his schooling at VR High School. Mr. Prasad completed initial 5 semesters of his Chemical Engineering at the Alagappa College of Technology and went to Illinois Institute of Technology in Chicago for completing remaining three semesters.

His education background also includes a MBA degree from Purdue University. He commenced his career after his MBA by joining his fathers construction business wherein he was involved in completion of various projects across Karnataka. In the year 1985, he co-founded Benzex Labs, an API manufacturing company, which was later taken over by Dr Reddys.

Mr Prasad is always dedicated to building the innovation side of the business. After completing his studies, he joined his family business for some time and wanted to start a business venture about which he was unsure. Then he established a bulk drugs company names Benzex Labs which unfortunately didnt go well and Dr Reddys Laboratories (DRL), which was in the vicinity and was growing incredibly insistently, wanted to acquire it. Though he went back to his fathers construction business which he was anyways not fond of.

In the year 1990, Dr. Reddy called him run Cheminor Drug, he already had a vision in his mind of getting back to pharmaceutical business but his previous failure was holding him back for some time. After joining and working hard, we internal transparency, decision making, and delegation of responsibilities were improved much more, which shaped a surrounding for attracting specialized talent. His few steps during his tenure include:

In the year 2000, they went to the New York Stock Exchange where a different class of shareholders demanded a much higher degree of transparency

He joined Dr. Reddys in the year 1986 and was appointed as Vice Chairman and CEO in 2001, when Cheminor Drugs, where he was Managing Director amalgamated with Dr Reddy's.

He has been accredited as the designer of Dr Reddy's Labs victorious worldwide generics strategy.

His Journey with Dr. Reddys Laboratories

For performing smooth operations of the company within a fortnight after the sudden demise of company's founder and Mr Prasads Father-in-Law Mr. Anji Reddy, The 52-year-old Prasad was appointed as the CEO. Prasad validates that Anji Reddy was more of a scientist than a businessman to whom unique research was more important than his company's balance sheets, which he left to others to take care of.

With his expertise of over 2 decades in pharmaceutical industry, Mr. Prasad is now recognized industry wide for his scientific innovation. He is steering operations with a view to achieve organizational objectives and endure profitability. During an interview, Mr. Prasad has relevealed some of his plans and confirmed that they are doing some remarkable work at Aurigene. Aurigene is a Dr. Reddy's subsidiary engaged in discovery services, with centres in Hyderabad and Bangalore where they are working ahead of generics and are functioning on proprietary goods which will morph into innovations if they reach their rational finale.

To keep himself involved and touched with the basics and all in and outs of the company, he keeps himself actively involved in the hiring process as well. This was he is focused on creating a general interest with the people who are joining Dr. Reddys.

The Indian Institute of Technology, Hyderabad

Mr. Prasad is married to Anuradha, the daughter of Kallam Anji Reddy, the founder of Dr Reddy's Labs. Anuradha is the managing trustee of Dr Reddys Labs as well as the founder-director of Saptaparni, an organization promoting the customs and traditions of India.