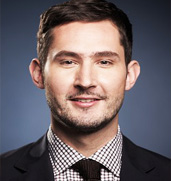 If you have got an idea, start today. Theres no better time than now to get going...

Communicating visually!! That is the core mantra which perhaps led to the inception of Instagram the top online mobile photo and video sharing social networking site and, creating immense value for its founders and early employees (there were only four of them!) along the way (in a mere matter of less than five years). It would not have been possible to imagine this unless the founder or the founders (in this case) had a clear mind as to what they wanted their service to be and, were very clear in how it would be differentiated from the so many others (Facebook et al).

One of them, Kevin Systrom, equipped with twin passions photography and technology- sparked it off like nothing else before. His upbringing, education, conviction, and the enterprising self, allowed him the liberty of turning down the likes of Facebook and Microsoft when he graduated out of Stanford. One would almost fret at the mere thought of it. But Systroms mind and thought process were as uncluttered as the application (well!) he would go on to create along with Mike Krieger, (Co-founder, mate from Stanford days).

The rest is folk-lore now: in less than two years from its inception, Instagram was acquired by Facebook for a whopping $1Bn (in cash & stocks). Whats more, Facebook retained Systrom as its CEO even after its inception. They would have known it pretty well that its Systrom brain-child and he is just the right person to take it forward.

Kevin Systrom was born (1983) in Holliston, Massachusetts. His parents, mother Diane (a marketing executive at Zipcar) and father Douglas Systrom (Vice-President in Human Resources at TJX Companies) were instrumental in the shaping Kevin into a tech-savvy youngster with a strong natural inclination towards photography. He was introduced to computer programming at the Middlesex School in Concord, Massachusetts during which period his interest in technology grew from playing Doom 2 and creating his own levels as a child.

In fact, it was his mother, herself early into technology with an initial stint at monster.com during the early start-up boom and then at Zipcar, who inspired young Systrom that led to a strong inclination towards technology.

As a child Kevin is believed to have been relentlessly persevering when obsessed with something like he was with deejaying during schooling. He wanted to try his hands at that so he kept writing to the Boston Beat, a vinyl-record store. He persevered until they let him in.

He passed out from Stanford with a B.S. in management science and engineering, and was a member of the Sigma Nu fraternity at the university.

Systrom used to toy around with code to create things so he can amuse his friends at college, much like when as a teenager, he created programs that would prank his friends by appearing to hack their AOL Instant Messenger accounts. He built web programs in his free time. One of them was a photo site that he and his fraternity brothers used to share party pictures within the circles. This is when Systrom realized just how much photography interested him. He visited Florence (Italy) while in junior year during which an Italian professor showed him a Holga a cheap camera (but had cult following because of its low-fidelity, retro-style photos). The young whiz was taken in by the aesthetic of the images from the Holga – they were simple yet very hip. This was the spark that would eventually combine his technical prowess and bent towards photography to let him create an exciting app used by almost 3M active users and liked by many more.

However, this wasnt where it started. While his first job was as a DJ at the Boston beat, during the summer before his senior year in college, Systrom took up internship at Odeo, a podcast start-up that would go on to become Twitter.

Then, to the surprise of many, including himself, he took up a job at Google as product marketing manager passing offers from Facebook and Microsoft. What was more surprising was that he wasnt actually involved in coding something at the tech giant. Rather he was part of the team that created marquee products of Google such as Gmail, Google Reader, Calendar, etc. While he was at Google, Facebook and Twitter both went public and brought in a windfall for their respective founders as well as employees too. To an outside, it would have been a huge question mark on his career prospects- missed the Facebook & Twitter boats, what next?

But to Systrom, made of different mettle, it didn’t bother much. As he was clear from the beginning while still at Stanford that theres a lot more practical to be done. He knew from then itself that great products sell themselves and that his idea would also get the billing it deserved in due course.

Not long after he had moved to the M&A team (corporate development) at Google, where he had learnt the intricacies of corporate culture and gained enough insights and perspective about how it all is undertaken, he joined a Next stop, a location recommendation start-up.

This experience led to the development of the prototype of Burbn (a misspelt hit like so many we now familiar with in the social networking sphere) an app that would combine location check-ins and social games. But, it appeared like it had too much it in to be a pain for the users like him who were primarily interested in photos and videos.

He teamed with Mike Krieger, his college engineering pal at Stanford whom he met during their time at the Mayfield Fellows Program, to do something simple yet different. The duo presented the idea to a few funders / ventures capitalists at party. While they may not have expected it to be easy, a couple of funders readily bought the idea and pitched in with an investment of about $500,000.

Mike Krieger and Kevin Systrom launched Instagram in San Francisco on October 6, 2010. It was accepted and liked so much by active social media users that its servers came tumbling down in less than two hours after it went live because of the traffic rush to the site.

The two of them feared a back-lash but still worked all-night to get the servers back up again and running. About 25,000 people had signed up for an Instagram account on that day; remarkable for an almost unknown entity, that too when there were other more famous ones such as Foursquare. It didnt stop there: a month after launching, Instagram had grown to 1 million users and to more than 10 million users a year later.

How the name was changed to Instagram is fascinating as well. Systrom termed their application as Instant Telegram. That was it so inadvertently, he had etched the name of their product shortened.

As of December 2014, Instagram has over 300 million active users.

He had missed the initial Facebook boat but he wasnt going to miss it an opportunity presented itself. It did in June 2006 when Mark Zuckerberg and he went around for a walk around the park (so to say). Knowing well that Instagram is going to be in safe hands, Systrom agreed to the offer from Facebook and the acquisition was completed for $1Bn.

Icing on the cake for Systrom and few others, was that they were retained by Facebook to carry forward the good work they had done thus far and marshal it to further glory in the future. Systrom was delegated to continue as the CEO with manpower strength growing to about 200 (December 20140. Instagram has only grown from then on to become a prized asset for Facebook with ad revenues slowly trickling in adding new (but always uncomplicated) features such as Instagram Direct, Hyperlapse, etc.