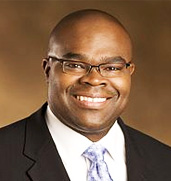 We're maintaining and even growing our market share, which is one of the things we strive to do...

An extraordinary blend of communal expertise and sophisticated statistical skills, Donald Thompson fondly known as Don Thompson is an American Engineer and a business executive, who was the President and CEO of world famous fast foods joint named McDonalds. He remained the CEO and President of McDonalds from 2012 up until 2015. He took up his retirement on March 1st 2015, wherein he was replaced by Steve Easterbrook, the senior executive vice president and the chief brand officer of the fast food biggie, as such.

A person whose achievements have never gone to his head, Donald Thompson is always known to have carried himself with an approachable and humble manner and this he demonstrates with smiles and hearty handshakes. A person who has the ability to listen, analyze and blend in, he makes people feel ease with him. With exceptional leadership qualities, he takes enough time for those people who work with and under him.

Don Thompson was born on the 30th of March 1963 and he is currently 52 years old. Thompson was born in Chicago and grew up near the Cabrini green housing project. He was quite a bright student at school. He completed his sixth grade while he was barely 10 years old. Because of the gang violence that prevailed in the vicinity, back then, i.e. in the late ‘60’s and ‘70’s, he was moved by his grand mom, to stay with his other relatives, who were living in Indianapolis. He attended the North Central High School.

He then went on to finish his graduation program in the field of Electrical Engineering. The degree was earned from the Purdue University in the year 1984. He also holds an honorary doctorate from Excelsior College.

As Don was an electrical engineer by profession, he initially kick started his career, working for a fighter jet maker which is now a part of Northrop Grumman. He was an engineer specialist of the aforesaid Defence Corporation group.

He joined McDonalds as a robotics engineer, to design circuits and feedback loops for the fast food chain of stores run and managed by McDonalds, in the year 1990.

His journey with McDonalds

Initially when Mr Thompson joined McDonalds in the year 1990, he was a robotics engineer. He designed the entire circuit control room for the McDonalds, he was currently working with. He designed robotic equipment for food transport and made control circuits for cooking. These unique innovations helped Don, climb up the corporate ladder, sooner than he had ever imagined. He immediately became the project manager for the Quality Control Department during the year 1992. He also served as the Staff Director for the Development team at the Denver Region of McDonalds.

During the late 90’s, he became the Regional Vice President of the San Diego region, the western end of California. He was primarily responsible for the day to day administration of more than 350 stores. He also oversaw chain of stores covering Southern California. Then Mr. Thompson subsequently went on, to become the President of Midwest operations, where he oversaw more than 2,200 restaurants. This was the entire zone of Midwestern United States.

He then went on, to become the Executive Vice President and innovation orchestration leader of McDonald’s solution group. He was responsible for establishing, integrating and co-ordinating the initiatives and efforts of the Solutions group at McDonalds. Under his leadership, he aimed at identifying and capitalizing new growth opportunities, including overseeing McDonald’s Corp. The activities that formed a core of his career profile included concept development, R & D and menu management functionalities. This was during the dawn of 2001 up until 2005.

Mr Thompson got a very big break on the career front, when he was appointed as the Chief Operating Officer, COO, of the entire chain of McDonalds covering the USA (United States of America). He became the COO of McDonald’s LLC division covering entire USA along with three signature brands connected with the food joint. This was during January 2005. He then became the head of Marketing for McDonald’s Canada branch, as well.

He then became the President of McDonalds, USA, LLC, a subsidiary of McDonald's Corp. and McDonalds Restaurants Of Canada Limited from August 23, 2006 to January 11, 2010. Mr Don Thompson finally coveted the top most position of McDonalds by being appointed as the Chief Executive Officer and President of McDonalds Corp. He got the promotion as on July 2012 and served up until March 2015. We have thus seen each and every iota of growth, with regard to Mr Thompson’s career with McDonalds, the world’s favourite food joint. Mr Thompson has thus covered e very spectrum of development and marketing with his 2.5 decade stint with Donald’s.

You get yummy burgers, sausages, cool desserts and garlic bread, as a predominant portion of the menu. You can chill out with friends and family, by taking them out to McDonalds. You get ice creams and milk shakes as well.

Other affiliations Mr Thompson is connected with

a) He used to be the member of McDonald’s Charities wing, as well.

b) Mr Thompson is one of the trustees of North Western Memorial hospital.

c) He represents the Advisory group of trustees at the Purdue University, too. This was the institute in which he had pursued his graduation degree in Electrical Engineering.

We have thus seen the career profile, rewards and recognition, early days, journey with McDonalds and other affiliations, of Mr Don Thompson in detail. The young and aspiring 52 year old CEO has a long way to go.

Donald Thompson is a proud family man and he is happily married to his college sweetheart Liz and the couple has two children and they reside in the Chicago area.