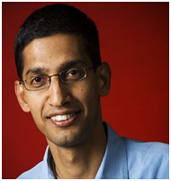 Android is one of the most open systems I've ever seen…

Sundar Pichai is the vice president of product development at Google Inc. He is an Indian born business executive, a technology whiz-kid and an IIT-ian, was responsible for the development of the Google browser. He is the head of the Google products like Android, Chrome, and Google Apps. He has oversight over the products like search, maps, Google+, commerce, advertising and infrastructure. Sunder pichai, 42, is also in charge of Google's main services, including its core search and advertising units, which generate the bulk of the company's revenue. Pichai, who has risen rapidly through the ranks since joining Google in 2004, is viewed by many industry insiders as potential CEO material.

Sunder Pichai was born in 1967, Tamil Naidu, India. He finished his early schooling at Padma Seshadri Bala Bhavan in Chennai He went on to do his B.Tech from the Indian Institute of Kharagpur in Metallurgical Engineering and was awarded an Institute Silver Medal. He holds an M.S. from Stanford University and an MBA from the Wharton School, where he was named a Siebel Scholar and a Palmer Scholar. His career kicked off with various engineering and product management positions at Applied Materials, and was also a management consultant with McKinsey & Company for a variety of software and semiconductor clients.

Mr. Pichai started his career with the engineering and product management divisions of semiconductor maker Applied Materials Inc. and as a management consultant at McKinsey & Co.

His journey with Google

Mr. Pichai was joined Google in 2004, where he was currently responsible for overall desktop strategy and ensuring access to Google services for desktop users. He is the lead of the innovation team which focuses completely on Google's search products, including Google Toolbar, Chrome, Desktop Search, Gadgets, Google Pack, Google Gears, Firefox extensions and Mac products. He has more than 15 years of experience developing high-tech consumer and enterprise products. He also serves as a Member of Board of Advisors at Ruba, Inc. He has been a Director of Jive Software, since April 2011.

Sunadar Pichai said in a press release "Google Chrome OS is a new project, separate from Android. Android was designed from the beginning to work across a variety of devices from phones to set-top boxes to netbooks. Google Chrome OS is being created for people who spend most of their time on the web, and is being designed to power computers ranging from small netbooks to full-size desktop systems. While there are areas where Google Chrome OS and Android overlap, we believe choice will drive innovation for the benefit of everyone, including Google.

"We hear a lot from our users and their message is clear that computers need to get better. People want to get to their email instantly, without wasting time waiting for their computers to boot and browsers to start up. They want their computers to always run as fast as when they first bought them. They want their data to be accessible to them wherever they are and not have to worry about losing their computer or forgetting to back up files. Even more importantly, they don't want to spend hours configuring their computers to work with every new piece of hardware, or have to worry about constant software updates. And any time our users have a better computing experience, Google benefits as well by having happier users who are more likely to spend time on the Internet."

His role in Google product development

Let us see his role in Google product development. Google chrome was launched in 2008 and Chrome OS was launched in 2009.Sunder pichai stated “"Google Chrome OS is being created for people who spend most of their time on the web, and is being designed to power computers ranging from small netbooks to full-size desktop systems. While there are areas where Google Chrome OS and Android overlap, we believe choice will drive innovation for the benefit of everyone, including Google", in a blog post. Different products launched by sunder pichai in brief:

Pichai joined Google in 2004, where he led the product management and innovation efforts for a suite of Google's client software products, including Google Chrome and Chrome OS, as well as being largely responsible for Google Drive. He went on to oversee the development of different apps like Gmail and Google Maps.

On 19 November 2009, Pichai gave a demonstration of Chrome OS and the Chromebook was released for trial and testing in 2011 and released in public in 2012.

On 13 March 2013, Pichai added Android to the Google products he oversees.

He serves as a Member of Board of Advisors at Ruba, Inc.

He was a Director of Jive Software from April 2011.

Google CEO Larry page expressed about his accomplishments in a blog posting saying” Sundar has a talent for creating products that are technically excellent yet easy to use--and he loves a big bet. Take Chrome, for example. In 2008, people asked whether the world really needed another browser. Today Chrome has hundreds of millions of happy users and is growing fast thanks to its speed, simplicity and security. So while Andy's a really hard act to follow, I know Sundar will do a tremendous job doubling down on Android as we work to push the ecosystem forward.”

Sundar Pichai is married to Anjali Pichai and has a daughter and a son. He is also passionate to play chess. In his Twitter profile, the tag says it all: "Personal computing, Chrome, Chrome OS, and Google, family, friends and life".

The technology whiz kid, the silver medalist from IIT Kharagpur, the vice president of Google products has a long way to go. We wish him good luck in all his future endeavours, as well