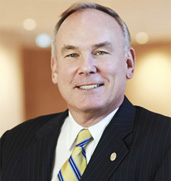 You need to build an infrastructure to support that growth, and making sure you have the right people in the right jobs....

A person who is known for his frequent guest lectures on those issues which affect the professional services as well as global capital markets, he has known to influence many with his speeches. Mr. Nally is also responsible for leading and taking care of the corporate responsibility efforts which also include his involvement with organisations like the World Business Council on Sustainable Development, the World Economic Forum’s Global Citizenship Initiative, and the United Nations Refugee Agency.

Mr. Nally was born in the year 1952 in Washington DC. He is a Roman Catholic by religion. He completed his graduation from the Western Michigan University. He has also completed Executive programs from two universities namely Columbia University and Pennsylvania State University respectively.

He joined Price Waterhouse Coopers in the year 1974, the moment he passed out of Western Michigan University.

He had joined the audit firm as one of the members on the Advisory board. It was in the year 1985, that he became one of the partners of the firm.

He served as the Managing Partner of Price Waterhouse Coopers, LLP, until the year 2000.

Mr. Nally served as the Chairman of the Board of Price Waterhouse Coopers, LLP from 2002 to 2009.

He also undertaken the responsibility of the Chairman post, for International operations in the year 2009.

Price Waterhouse Coopers is one of the renowned Auditing firms across the United States of America. It is one of 4 biggie auditing firms just next to Deloitte, EY and KPMG. It has its presence in more than 157 countries, across the globe. $15.1 billion is generated through Assurance practice services, while $8.8 billion is towards taxation services and $10 billion is received on account of its Advisory Services. It provides guidelines to global firms on how to run the firm.

The firm was formed in the year 1998, through the liaison of Coopers and Lybrand and between Price Waterhouse. PWC is the fifth largest privately owned organization, throughout the US.

These are the global affiliates; Mr Nally is currently associated with. Let us have a look at a couple of them:

Mr. Nally is a member of the American Institute of Certified Public Accountants and the New York State Society of CPA’s.

He is also one of the members of the Duke Kunshan University. He is a part of the Advisory Board.

He is one of the Trustees with Carnegie Hall Society Board.

He belongs to the board of the Business Round Table.

He also serves as the Vice Chairman and Board member of the US Council for International Business.

Economic Forums, the global icon has participated in

Mr Nally is a global speaker at various forums including World Economic forum, Asia-Pacific Economic Co-operation (APEC) CEO Summit, Financial Executives International and a lot more. He speaks on sustainable development, Global Citizenship Initiative and a lot many things concerning the economy as a whole. Youngsters can look forward to this gentleman, towards shaping up their careers in life.

His journey with PWC

Mr Dennis M Nally has been with Price Waterhouse Coopers for the last 39 years, ever since he completed his graduation program in the year 1974. He joined the board of Trustees in the year ’74, while he became of the partner of the World famous audit firm during the year 1985. He has served in numerous leadership positions within PWC, including National Director of Strategic Planning, Managing partner and Advisory services leader. Mr. Nally is involved in lot of corporate efforts connected with the firm. And he also guides large multinational clients in technology and life sciences apart from providing audit and tax advisory services, which are the typical USP’s of the audit firm, as such. He is an energetic 60 Year old Chairman who has aged gracefully.

Though he had a bountiful experience of providing advisory services to quite a lot of European and American firms, he has got a great passion towards developing products for Asian countries. As a Chairman of PWC, LLP, he wants to tap the markets out there. He had recently been to Taiwan, Philippines, Hong Kong and Indonesia, to look deeper down the line.

He has got a fair idea on relocating R & D services to the emerging Asian Markets. As this would give his team an insight on what kind of opportunities are prevalent in these markets, what consumer preferences are, and how to deliver the products to these markets. He has also got an idea to re-engineer social media, as a viable means to know the changing dynamics of how businesses interact with their customers and how consumers feel about the whole thing.

This will continue to be a trend for the foreseeable future. At PWC, the global icon is focused on hiring fresher and newer talent, and to retain the existing employees. And incidentally provide them with better opportunities for travelling across the globe. This is the burning issue running in Mr. Nally’s mind, with regard to PWC, Europe as the economy is quite resilient and slow moving at this point of time. He definitely feels that it is the risk Vs reward thing, i.e. CEO’s need to streamline their thought process towards the end-results and take mightier risks in order to take the economy forward.

The 60 year old global icon is also involved in campaigning for issues relating to human rights, labour, environment and anti-corruption. This way, he is a spectrum of knowledge and humanity.

On a personal front

He was married to wife Karen. The couple is blessed with four children, viz. one son named Brian and three daughters namely Lindsay, Kathryn and Lauren respectively. They stay in Washington, DC itself.

As you can see, this global icon was not only committed to his profession but also was equally committed to the humanitarian issues concerning the economy. He always wanted to give back to the society, which he was apparently successful in doing so. You can catch up on his guest lectures on Vimeo or You Tube to get a better insight of his persona, on the whole.