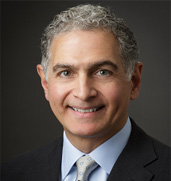 We have gone towards a much more values-based and culture-based approach to how we introduce people into the Hyatt family...

Who wouldn't know the famous chain of Hotels, Hyatt? Mark Hoplamazian is the CEO of Hotels Corporation. Mark was appointed as one of the Board of Directors of the Hyatt Hotel Corporation in the year 2006. Apparently, he assumed the position of President and Chief Executive Officer of Hyatt group of hotels during December 2006.

A person who never believed that he would be the boss of Hyatt, was shocked him when the Chairman of the offered the role to him. He believes that the employees of any firm are indeed a corporate family. A very approachable person as his team finds him to be, he never lets the success get on to him.

With over 488 hotels Word wide Hyatt operates under a number of brand names and some of them to be mentioned are the ultra luxury Park Hyatt, the Hyatt Regency and the Grand Hyatt.

The CEO of the branch of Hotels which is known to serve the global mobile class indeed needs to sweat himself but he does with a systematic rigor. It certainly sounds like one perfect assignment, isn't it? Whatever it is, Mark Hoplamazian knows to handle it beautifully with perfection.

1.He has also worked with the World's Travel and Tourism Commercial wing, during the initial days since he had finished his MBA.

2.Mr Hoplamazian served as a Director of Reliant Pharmaceuticals up until August 1999.

3.He served as a Non-Executive Director at Catlin Group ltd. Until March 2, 2004.

4.He served as the Vice President of Pritzker Organization, LLP from 2004 to 2009. He has had an experience of 14 years of his unison with the Pritzker group.

5.Mr Mark S Hoplamazian finally acquired the post of a CEO at the world famous Hyatt group of hotels on the 26th of December 2009.

During the course of the career profile of Mr Mark S Hoplamazian, these are the global affiliations; the 50 year old business persona is currently involved in

a) He serves on the Board of Trustees representing the Latin School of Chicago.

b) He also has an international cadet with the World Tourism and Hospitality group in New York. This was on account of his 17 year stint par excellence representing the Pritzker group LLP and the Global Hyatt Corporation.

c) He again marks his presence on the Advisory board of the Facing History group.

d) He is a member of the Discovery Class of the Henry Crown Fellowship at the Aspen Institute.

His journey with the Hyatt group

It was never an easy feat for the global icon Mark Hoplamazian to run an international hotel chain when he started off his career working at a graveyard shift in a two star hotel in Edgware Road in London. He has then clambered a long way up in the corporate world. He had always been a people’s person and a motivator. Otherwise how could a guy who was managing a private business of real estate and family affairs of Pritzker group, go on top to manage the Hyatt group of Hotel Corporations. He has a 3 decade worth of experience managing travel, tourism, hotels booking and hospitality industry to his credit. This enriched exposure made him the President and CEO of Hyatt Hotels Corporation in the year 2009.

After he took over the profile of a CEO and President of Hyatt, the hotel chain has added 508 luxury properties across 46 countries. This was according to the survey taken in March 2013. It has added 22 new hotels in the year 2012 alone. There was this super luxury hotel named Andaz Amsterdam Prinsengracht in the Netherlands and the finest group of Hotels started outside the US, in Costa Rica and India respectively which were specialty creations indeed. It has elevated the standard of the hotel by leaps and bounds.

As of today, the hard work of this guy has added net assets worth $ 10 billion only in the form of 200 luxury properties added to the Hyatt group. Now presently there are 7 distinct brands under the same umbrella, giving the hotel group staggering annual revenue of $4 billion. The other hotel competitors for Hyatt group include Hilton group of hotels and the Marriott which boast of 3,800 and 3,700 properties respectively. But what Hyatt CEO and Chairman Mark Hoplamazian wants is the preferred customer experience? He thus focusses on making the brand a preferred one for colleagues, guests and owners.

“We believe that our culture and the relationships amongst our colleagues ultimately position the Hyatt brand to represent human care -- and to go beyond service to our guests as a hotel company”. These are the golden words of Mark and he pretty much sticks to this particular dictum. As a part of this philosophy the Hyatt group is committed to provide local literacy and career development programs in communities Hyatt is managing and conducting its business operations. The hotel group has made a commitment of more than $750,000 towards this particular initiative.

It will also set up its new office in Rio de Janeiro in the year 2015. This way people who have had a rough childhood in the past or are coming from under privileged backgrounds will make substantial career moves out of the same rather than getting baffled or getting gripped in depression.

He made sure that the boutique hotels were a fast growing segment as Euromonitor International rated the Hyatt group worth $457 billion industry as of 2012. He is a strong proponent of social media, as a means of gauging guests’ sentiment.

His personal life and family

He has married Rachel Kohler i.e. owner of Kohler bath and fittings company. And the couple reside in United States blessed with three children. During his free time, he unwinds with his family and loves spending time with his children. Mark is fond of watching wild animals at play. He practises yoga or walks on the treadmill for at least 30 minutes every day. As it is a hotel business, he is required to fly to unique destinations every now and then. But that doesn’t restrict him from spending quality time with his family. He gives them all the attention, they need.

He is planning to write his own biography in the book titled ‘Conscious Capitalism: Liberating the Heroic Spirit of Business’ by co-partnering with Whole foods Market co-founder John Mackey..

He has been instrumental in bagging some of the most iconic mergers and acquisitions marking an international cadre. This was representing the First Boston Corporation in New York.