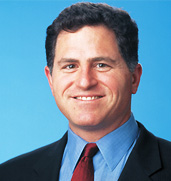 Our business is about technology, operations and customer relationships...

Michael Saun Dell is an American business entrepreneur, investor and philanthropist who is the founder and CEO of Dell Inc. Dell is one of the leading market players in manufacture of Personal Computers (PC’s). Mike was ranked as the 41st richest man in the world on 2012 Forbes list of billionaires, with a total net worth of US $ 22.4 billion, as of December 2014.

He was into doing odd jobs like making a calculator, assembling electronic chips and circuits and lot many other things, at an early age of 10 or 11. It was in the year 1984 that he started Dell Inc. He discovered that there was a tremendous market for manufacturing of PC’s over the conventional form of computers. Dell was thus registered under the name ‘PC’s Limited’. This was during the initial stages, while the computer biggie had just started off. It was operating with a small cubicle cum condominium, while the business was mainly engaged in selling upgraded PC’s, kits and add-on components. The turnover was so great, in the initial year of having kick started the business, and the firm was able to make $50,000 to $80,000. It was in May 1984, Michael S Dell, incorporated his firm as ‘Dell Computer Corporation’. The business re-located to another set up in North Austin.

The company employed few more staff and was working on few more orders. During the initial days of having started the PC biggie, the manufacturing staff merely comprised of three guys with screw drivers working on six foot tables.

This is the brief stint on how a firm which barely upgraded electronic components and kits went on to manufacture PC’s. Today it is the number one PC manufacturing firm across US.

Michael S Dell was born on the 23rd of February 1965 in Houston, Texas, United States of America. He was born in the Jewish family and family had immigrated to the United States of America, back then. He is the son of Lorraine Charlotte who is a stock broker and Alexander Dell who is an orthodontist. As a kid, Mike was too eager to enter the business world. This quest led him to taking up the high school equivalency exam, while he was just 8 years old. He invested his earnings from part-time jobs in stocks and semi-precious metals.

He was a drop-out from the University of Texas at Austin.

Mike S Dell has worked with some well known organisations and is a part of a number of Boards. He is the Chairman and Chief Executive Officer of Dell ventures. He is also the President and Director of The Michael and Susan Dell Foundation. He also happens to be the Member of Foundation Board of the World Economic Forum. Being an Executive Director of Denali Holding Inc.., he has worked as the Chairman of many companies and also served as the Director of Catalyst Inc. He also serves as the Director of Start-up America Partnership, LLC.

His journey with Dell Inc.

Mike S Dell was appointed as the CEO of Dell Inc. in the year 1992. He was 27 years old, at that point of time. From there on, there has absolutely been no looking back. He was ranked as one of the top 100 CEO’s in Fortune Magazine and has bagged quite a lot of awards as put up on the ‘Rewards and Recognition’ section. Under the iconic persona’s leadership and guidance, Dell started selling computers over the web. This was during the year 1996. The company has launched its first set of servers during the very same year.

Selling computers over the web eventually turned out to be quite a profitable affair. Dell Inc. reported a cool sales turnover of $1 million just selling computers and PC’s via dell dot com.

In the first quarter of 2001, Dell Inc. surpassed the market share of yet another competent PC manufacturing biggie named Compaq and went on to become the world’s largest PC maker. The company started shipping out notebooks, lap tops, desktops and servers, capturing a market share of a whopping 34.3% worldwide and 30.7 % across US alone, while the sales of other PC firms were shrinking.

In the year 1998, Dell founded another sister company namely MSD Capital LP. This firm was mainly started to manage his family based investments. These included publicly traded securities, private equity and real estate. Of course, there remains the fact that Dell himself was not involved in the day to day operations of MSD capital Inc. The firm has employed 80 people to take care of the concern and has offices across New York, Santa Monica and London.

This describes the journey of the business magnate with Dell Inc.

These are the affiliations, Dell is involved in

a) He serves on the foundation of World Economic Forum.

c) He is among the governing board of the Indian School of Business in Hyderabad.

His personal interests and family life

Mike is a renowned writer, as well. Dell wrote his first book which was published in the year 1999. The book is named ‘Direct from Dell: Strategies that revolutionized the industry’. The book typically comprises of his early life, how he founded the company, growth and missteps and the lessons learned. He collaborated with Catherine Fredman and the book was thus published.

He married Susan L Lieberman in the year 1989 in Austin, Texas. The couple resides there along with their four daughters.

The couple also focuses on philanthropic activities, which are being undertaken in the name of Michael and Susan Dell Foundation. It focuses on socio-economic causes along with providing urban education, childhood health and family economic stability.

The American businessman, magnate, CEO and the philanthropist has a long way to go. We wish him good luck in all his future endeavours, as well.