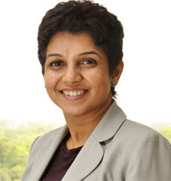 I would say that personalization and making business personal is very unique to Facebook...

She has an affable charm which when combined with her go getter attitude, indeed makes her the freshest face known for success in our country. She was one of the very first employees and she started the India operations from the scratch and has also opened the shutters of the office on day one. She always recollects that moment as the AHA moment in her life.

Kirthiga Reddy believes that a modern woman has to look ahead at the goal she has to achieve but not the hindrances. She always has to make sure that the stereotype work in her favour and also needs to focus on her impact.

Kirthiga Reddy was born in Nagpur. She completed her graduation programme in computer engineering. She did her program at the MGM University in Nandad. And she had done her Masters i.e. MS in computer technology from Syracuse University. She has apparently completed her MBA program from Stanford University.

She had worked as a Summer Associate for Booz Allen Hamilton for just less than a year. This was during the year 2002.

She then joined another company named Good Technology. She worked in this company as the Group Product Manager for three years, i.e. between 2003 and 2006.

She then joined Motorola Inc. as the director for Product Management. This was during the period between 2006 and 2008.

She again became the Director for Good India group wherein she was heading the Motorola group, all over again. This for 2008-2008, comprised a year or two.

She finally bagged the coveted position of MD and CEO of Facebook India during the mid-2010, i.e. July 2010. She has been serving as the MD of the social networking biggie ever since. Till now, she has an overall experience of 4 years and 8 months of having joined FB.

This covers her overall career graph throughout her life.

She had joined FB in July 2010 and has been the managing director and Chief Executive Officer of Facebook, India, since then. Today at the age of 42, she has emerged as a strong leader, heading Facebook operations in India. While she had joined the social networking biggie back then, she was the first Indian employee of Facebook, India.

She is now facing a daunting task of monetising the platform. She says she would like advertisers, marketers and brand managers leverage the power of the platform with targeted messages and campaigns and reach out to the expanding user base. She expressed that most of the students and house wives spend maximum time on Face book than Yahoo, MSN, Google, You tube or any other social networking site. Indians are the second top to just Americans, when it comes to extensive usage of the Social Networking site. She has been quite instrumental in galloping the growth of the social networking site in a big way, during the course of 4 years tenure, while she had joined the company back then.

As such she says, people share their day to day happenings of their life on the social platform. This is in terms of the friends they love gossiping with, their choice of restaurants, gaming preferences, the holiday spots they had recently visited including posh photos, etc. There are millions of friend requests and interactions every single day.

The best part, worked out by her team in India and Zuck (Mark Zuckerberg is the co-founder and CEO of entire gamut of Facebook operations, across the world) in the US, is that if you don’t want to be disturbed by a particular advertiser or a promo video, the social platform somehow senses the negative feel and the video will not pop up on your site ever again. This means the social platform only focuses on providing the target audience with relevant content.

Even Zuck finds India to be a competitive and a thriving market as most of the global operations are carried out in different cities of the sub-continent, as such. He feels monetisation of the online market will work wonders in the Indian economy.

Under the leadership of Ms Reddy, a lot of ad campaigns were launched on Facebook. Coco Cola and Yep me recently launched their signature products through FB.

In fact, she launched a deal with yep me dot com, a fashion accessory website in co-relation with Facebook. The fashion site was comfortable able to bag more than 4.5 times the initial investment through the campaign launch on Facebook. Some of the famous brands advertised via FB include, Coco Cola, yep me and two other start-up companies namely Pig-tales and Pony. These two firms were started by two young boys based out of Bangalore. Larger brands, DR (Direct Response) Advertisers, home businesses and small and medium scale businesses can also be launched through Face- book. Under the guidance of Ms Reddy and her team, strong collaborative product solution portfolios can also be developed via mobile apps.

So a lot of CFOs and CMO’s approach the young lady to leverage their business or e-commerce sites via Facebook. Hence there is a lot of activity happening around the social networking buzz, as such. This is going to be a never ending thing.

She stays with her husband along with her two daughters, Ariya and Ashna. She travels across the globe for trade meetings and important conference summits. She has had quite a tough time juggling through work and family. But with her supportive in-laws and husband, she somehow managed to sail through, the teething phase.

During her entire tenure at Facebook, she has managed to bag quite a few notable acquisitions and has created a great value for the business.

The young and aspiring CEO of Facebook, India, Ms Reddy, has a long way to go!