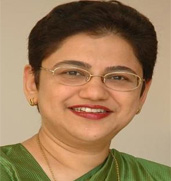 Both carry equal relevance in my life..... I enjoy my work and I enjoy my life

Roopa is the Managing Director and Chief Executive Officer at CRISIL. CRISIL is a company on a global platform which provides analytics and policy advisory services, spanning the length and breadth of the country as such. The company ranks the credit worthiness of leading banks and their customers thriving in the country. It offers services in terms of research on risk advisory guidelines, ratings and research oriented info, quite in a nutshell.

There are many people who say, that Roopa Kudwa is living her dream. But for her heading the India’s pioneering rating agency and being the wife of high-profile global fund manager carry equal importance in her life.

CRISIL in a nut shell is a high end provider of research and analytics services to the world’s largest banks and lending corporations. The company delivers analysis, opinions and solutions, which help the markets, perform better.

A person who is always busy with meetings and schedules, she loves to read during her leisure time and she reads a lot. She carried a passion to be a teacher in her young age. She says that the biographies of the country’s leaders attract her the most. Some of her favourite books are Personal History the autobiography of Katherine Graham, the book about a simple housewife who took a step ahead to head The Washing Post after the sudden suicide of her husband.

Roopa Kudva did her Bachelor’s degree in Statistics. Ms Kudva then went on to complete her post graduate diploma in IIM (Indian Institute of Management) Ahmedabad. In fact she has also bagged the ‘Distinguished Alumnus Award’, from her alma mater.

She joined CRISIL in the year 1992 and has worked in the emerging markets across Middle East, Mediterranean and South Asian countries. This was in congruence to CRISIL’s tie up with Standard and poor which is a financial institution head quartered in Paris. Prior to this, she worked in the finance department at Industrial Development Bank of India (IDBI).

She was also the Former Director with National Commodity & Derivatives Exchange Ltd. She also worked as the Director of India Index Services & Products Ltd and Executive Director of Coalition Development Ltd.

Her journey with CRISIL

As stated in the earlier paragraphs, the alumni from IIM-A, Ms Roopa Kudva joined CRISIL in the year 1992, after her six year stint at IDBI. She was appointed as the Managing Director and Chief Executive Officer of CRISIL during the year 2007. She was the iron lady who led CRISIL’s evolution from an Indian rating agency to a diversified analytical company. The clients range from biggie and most powerful investment and credit lending banking corporations of the world to tens of thousands of smaller firms, spread across India. Under her able leadership and guidance, CRISIL’s revenue has increased triple times and so as its diversified level of business. CRISIL, while it made its head way entry in India, was catering to 9 major Indian cities, now has grown up to 150 in today’s scenario.

The iconic lady has provided so much of positive growth and an enhanced level of vigour to the credit rating agency that it has expanded its business operations to international markets like Argentina, China, Poland and Paris. Ms Kudva during her tenure has pioneered several major projects for CRISIL. It includes rating the credit standing of medium and small scale industries running through the length and breadth of the country. She has also been instrumental towards the launch of a unique Financial Inclusion Index for India. The 50 year olds prevalence in the business world simply does not end here.

She also spearheaded CRISIL's entry into proprietary research outside India by acquiring UK-based Coalition Development Ltd in 2012. This way, she not only made sure the credit rating agency did well in its operations which it initially came up with. But she had also helped CRISIL foray into global research and analytics. Ms Kudva joined CRISIL in 1992, and has more than two decades of global experience across sectors, in India, Middle-East, Eastern Europe, and Mediterranean countries, including a secondment to Standard & Poor's, Paris, as Director, Financial Institutions Ratings.

She used to head a team of 1500 people, which she was taking up her role as the CFO (Chief Financial Officer) at CRISIL. And 30% of the work force under her leadership comprised of aspiring and young women.

Now, apart from research and ratings, she helped the team at CRISIL foray into the off shoring business. This was what she had to say, while she was being interviewed in a corporate meet, “We will continue to focus on offering innovative and high quality services to our customers”.

She held the post of a CEO from 2007 up until 2014, while she had to quit CRISIL. She has currently joined the Board committee of Infosys group.

Ms Kudva is a committee member of several financial institutions, including those of Securities and Exchange board of India popularly known as SEBI and that of Reserve Bank of India i.e. RBI. She is also a leading member on the Board of Directors council at NASSCOM. She gives guest lectures and holds conferences and seminars across global frontiers. These include multi-lateral agencies, market participants and leading academic universities and colleges. She is definitely a source of inspiration for the present as well as future generation lads. She is one of the few powerful women in India, who has taken the road, less travelled.

Roopa is married to Vivek Kudva, while the couple wanted to re-locate to the Garden city namely Bangalore. She works out at the gym even during the afternoons as she is a fitness freak beyond doubts. In spite of her hectic 10 hour schedule at the work-place, she doesn’t miss out her exercising regime at the gym. Kudva feels that one should manage time efficiently that neither your work nor family should suffer. And she gives the same advice to her colleagues, as well. End of the day, spending time with kids and family gives you utmost happiness and satisfaction. No matter how many medals or awards you might have bagged in the corporate world. Ms Roopa Kudva, CEO of CRISIL, is no exception to that!