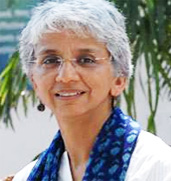 Our strong image as an employer of choice is attributed to the differentiated value-proposition we offer...

Rekha Menon can be named as one of those very few females who are never hemmed by norms. A person, who has the ability to build high quality teams with low attrition rate, is also a big admirer of athletics.

Rekha Menon is 55 years old, who is currently the Executive Director and Chief Executive Officer of the Accenture India Pvt. Ltd. She joined Accenture way back in 2004, in order to set up the corporate function for Accenture in India. This was invariably her first exposure to the global organization. She worked in a typical factory environment, the moment she had completed her MBA in marketing management. She feels her career went through a major learning curve during the tenure which would not have been possible without the encouragement from her father.

Rekha Menon is apparently a gold medallist and she has completed her Management degree in Business Administration (MBA) from XLRI (Xavier Labour Relations Institute). She tried to get into Hindustan Lever as her first job. But because the company’s working force was dominated by upcoming salesmen and she was a woman, she had found it hard to sneak in.

The moment she had completed her MBA in marketing management, she joined Eicher, which was a truck manufacturing company. She was the only lady among a group of men as it was a typical factory atmosphere. In fact she had to use the manager’s jeep to go his house, even to go to the rest room.

She later worked with Ashok Leyland. She worked with Talisma group, while she was here in Bangalore. She has worked with start-ups of Levi Strauss, Akzo Nobel and Cargill Inc.

It was in the year 2004 that she has joined Accenture and it has almost been 14 years with the same company. Let us see how her journey with Accenture progressed, throughout her career span, with the software biggie.

Her journey with Accenture

She had joined Accenture in the year 2004, while the company was only into consulting in India. Menon learnt about scale and this was the first global organization she had ever worked with. Menon was instrumental in setting up delivery centre for Accenture and then she helped the firm branch out to outsourcing business. She has taken the company forward step by step. She was then sent to Philippines and China, to set up delivery centres over there.

She headed operations for Asia Pacific, including India. She took up several strategic positions at the corporate level including finance, marketing, legal, real estate and procurement, among others. In her 23 years career stint of working with several global giants, she has worked with Accenture India Pvt. Ltd., alone for almost 14 years.

A quote by the woman entrepreneur who made it big in the corporate world.

“There are no standard solutions to problems. I tried hard to fit in and not sneak out. It doesn’t matter if you are a woman, if you are good at your job and are open to learn”.

Women need not confine themselves to the kitchen when they have innate capabilities amongst them to outshine the world.

Today, she heads Human Resources for all divisions of Accenture’s growth markets, a division carved out at the end of last year to tap domestic business opportunities across the globe and a decision that could even alter Accenture's fortunes. Menon who has been offered the role pretty recently is all excited to justify the position and come out in flying colours. The end result is to show a strong phenomenal growth in all spectrums, the industry has to offer.

In Accenture she teamed up with Leonard Cheshire to start up a wing for people with physical disabilities. The philanthropic endeavour of Ms Menon can be well appreciated, over here.

We design the modules and train them to get jobs in different areas, including with us, but we can't absorb everyone," says Menon. She loves building modules, she loves doing something or the other innovative. She doesn’t mind running about, with scale. She has a passion and a drive which is beyond excellence.

And that is why she is here heading Accenture, which is out and out a People’s company. She came up with a unique concept that no one should be hacked out of the company, even when it is experiencing deep recession. Rather the working hours are increased from 9 hours per day to 10 hours per day. This was during the year 2008-2009, while all the other firms were issuing pink slips to employees’ right, left and centre. This was really a bold decision taken by the iron lady, as such.

Menon’s growth had been superseding even highly talented men in the corporate industry. But she has had her own chores or work-life balance issues, which she was able to successfully pull off. She was working in Ashok Leyland, while she had married Vijayan Menon. And she had conceived. She recalls those days, stating there was not even a crèche nearby where she could put her first son in.

And she had to juggle home and family for 6 days in a week in the typical factory atmosphere. And invariably she became pregnant second time. This was when she had to take time off from work and look after her family. But still she simply did not give up. She wanted to stay relevant. She did her own part time consulting for almost 6 years until the kids grew up..

These factors clearly show that women need not stay behind in career and can still manage family life without hassles. The determination and the courage the XLRI gold medallist came up with, is something really commendable.

She then started her own firm in Bangalore. The first start-up was named Talisma group while the other unit was Aditi Software technologies. Both the firms were sourced by the business deals offered by McKinsey, Texas instruments and Microsoft. Talisma became a venture capital unit worth $60 million.

Mrs Menon had the hard core attitude and lower attrition i.e. jumping from one company to another within short periods of time. These qualities are rare to find in Indian women in the society. She thus proved her mettle to be a gem in the corporate world.

The 55 year old lady entrepreneur is also an athlete and really has a long way to go!

Rekha Menon is married to Vijayan Menon and has two kids.