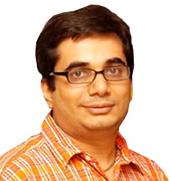 Our users are, in fact, called players and not users...

Vishal Gondal is the Managing Director and CEO of India Games Pvt. Ltd. He is an Indian entrepreneur and an avid investor. The master mind has completely been focusing on the next generation devices.

India games is an entirely web based portal filled with exciting and fun filled games. In fact, Rediff called him, the king of gaming. The gaming industry, which he started off with a minimum seed capital is today worth a US $ 300 million.

A person who believes in hard work and dedication, implements the same in his work place. He is also known to maintain the needed transparency in all his dealings and also at the work place. His employees find him very approachable and very understanding.

A fitness freak by nature, he has also won a number of accolades for various sports championships and he still keeps himself fit and works out whenever he finds time from his busy schedule.

Mr. Gondal has his firm participating in various Cyber game championships as well and are also working hand on hand with the CII and the government to see if T-Sports and gaming are both taken professionally as a sport. He hopes to see India Games leading in all the gaming spaces, worldwide.

Vishal was born on 14 of July 1976 in Nagpur and was brought up in Mumbai. He has done his Bachelor’s degree in Commerce from the Mumbai University.

He was a prodigy when it came to developing web applications. He became an expert in handling technology, when his dad gifted him with a personal computer. This was while he was in his eighth grade.

At this point of time, he had created a mailing list as he had bagged a project from the bank. This endeavour on creating a subscriber’s mailing list for 6000 bank customers made him earn his first pay cheque amounting to Rupees 60,000.

He started his first gaming company while has was hardly 16 years old. He had rented his dad’s garage to teach students, the nuances of web application and Lotus notes. Studies or education was just for name-sake, while his interest was purely in the world of gaming. It was typically in the year 1999, that the big thing happened. He started India games Pvt Ltd with a five member team. India games is a portal with which one can upload Disney games and lot of PC related games. The application can be made to run on internet, PC, broadband, mobile phones, PDA’s, hand held gaming devices and consoles.

While he was hardly a kid, he had developed a video game based on the Kargil war. In the game, players could roll down gun shots on Nawaz Sheriff and other Pakistani soldiers. The game has won him several accolades, even from the Indian army. He was in fact interviewed by several television channels like India News, Star News, CNN and BBC.

He has been the Managing director for Disney UTV digital, The Walt Disney Company India Pvt. Ltd. and for Go-key, a company which manufactures sensor detected t-shirts and gym wear. Thus Vishal has been instrumental in changing the dimension for wearables, as such.

His journey with India games

Under the leadership and able guidance of Vishal Gondal, India games was able to capture almost 60% of the nation’s share, especially on the gaming industry. Some of the games can be activated both in WI-FI and on offline mode as well. This was phased out in the year 2005.

What started as a gaming portal, with a seed capital of Rupees 1, 00,000 way back in 1999 currently holds 300 employees in the Mumbai Office. Apparently the gaming console has touched foot prints on the global proforma as the company has offices in Los Angeles, London, Beijing, etc. The company held its offices in international locations during 2009.

Apparently Mr Vishal Gondal sold a majority of stakes- almost close to 76.29% to another gaming company known as TOM online games, a subsidiary of TOM online Inc. But he still retained his position of CEO at India Games. In other words, he was looking after the day to day business of the company which he has co-founded. Vishal took up this move in the year 2005.

In December 2007, another major take-over of India games took place. This time it was UTV software communication, which had acquired a majority of stakes in India games. In 2008, he launched Sweat and Blood Venture group to invest in start-ups at a seed level. So far, the Venture group has invested in three start-ups: Mumbai-based Gama Entertainment Systems, a developer and manufacturer of entertainment hardware and software products for the retail industry, Insta-blogs, a blogging community, and Kyko, which is still hidden from the rest of the world.

There was another biggie firm started by Mr Vishal Gondal. The firm is named GOQii. The company is in terms of providing a sophisticated technology on apparels. The apparels are made from special elements of nature, which provides human beings with a better feel and improves one’s level of concentration and social engagement. He thus developed a beautiful product to maintain the overall balance of eco-system. This accounted for the philanthropic efforts of Vishal and his team. Vishal is also on the advisory board of Nokia’s wireless gaming technology division.

He was a national volley ball player who represented the Maharashtrian Volley ball team championship. He lives with his family in Mumbai and the couple is blessed with two sons namely Aryan and Veer.

The 40 year old entrepreneur has done quite a lot for the economy. And gaming business is definitely a great boom for the e-age we currently are residing in. Youngsters can look forward to this icon and take up different careers than being stereotyped engineers or software programmers.