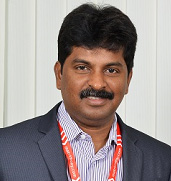 Technology has been given a strong priority, close to 40 percent of our users are already accessing our website through mobile phones...

A humble human being by nature, Murugavel Janaki Raman is the CEO and co-founder of Bharat Matrimony. The website is Matrimony dot com Pvt. ltd. It is an Indian matrimonial website, which brings prospective grooms and brides in a beautiful liaison called marriage. The matrimony site also deals with property deals and other related businesses. It was ranked one the fastest growing online sites among Deloitte Technology fast 50 companies in India.

Mr Janaki Raman is also the youngest businessman to be a SIGARAM-15 Business Icon.

Mr. Janaki Raman likes to keep things quite simple and also works not for profits but likes to work so that he can give something back to the society. A hard worker by nature, he also understands the problems of his co-workers and provides them all the needed support. A true leader and entrepreneur by nature, Mr. Raman is sure to reach heights with a number of initiatives.

His other initiatives include Elite Matrimony, Assisted Matrimony which is used by more than 350 community groups across India, India-property- a realty based e-site and Tambulya. Tambulya is an online portal which deals with giving away return gifts by hosts conducting the wedding and for various other occasions.

Mr Janaki Raman comes from a modest family back ground. He is quite and an unassuming person, who does not like bragging too much about himself. But his accolades both from a career and from an entrepreneur’s point of view is quite enriching. He did his Bachelor’s degree in Statistics from Madras University and also completed his MCA (Master’s Degree in Computer Application) programme from the same university.

He started off his career at a Chennai based software company known as Nucleus Software. From there, he moved to yet another company based out of Singapore.

He has also worked for several US projects as a leading software consultant. During the year 1997, while he was working as a programmer in New Jersey, he saw several like-minded people wanting to tie the knot. Like the groom was in search of a girl who resided in US and had a working career in the same field as his. This was the typical scenario among women wanting to choose suitable partners as their spouses. Seeing the plight of both men and women, he wanted to start a chat scheme among them, so that they can communicate effectively through the internet and then tie the knot. He thus started a Matrimony site in the name of matrimony dot com Pvt. Ltd. Today, it is one of the first rated matrimony sites in the entire country.

The 37 year old business icon believed in the enormous power of the internet, to reach a wide segment of audience. Bharat matrimony dot com thus emerged in the year 1997. This service has become a life changing service among young girls and guys, wanting to find an ideal mate of their choice. The service started off, with 4000 members initially registering on to the site. Today, it has sensed success rate eight times more than any other matrimony site, across the country. The business icon has been rewarded by Times Magazine and Deloitte consulting group along with several accreditations, running to his credit.

The matrimony site supports 15 different languages adding to an enormous linguistic support. Today, he has won the support and good will of more than 7.5 million members world-wide. Through the matrimony site, there have been more than 7 lakh marriages which have been conducted successfully. This shows the enormity of a single guy’s effort.

Today the matrimony online site has an active work force of more than 300 people. It is the co-founder and CEO of the firm, Muruga himself, who calls shots and makes important moves connected with the deliverables of the e-site, as such.

His entrepreneurial spirit and innovative thinking, which the guy is gifted with, has for sure bought him this far. He does not believe in making profits. He just wants to give back to the society but by numerous leaps and bounds. His forte lies in building a solid e-firm in the form of a matrimony website. In the next section we are going to have a look at the other initiatives taken up, by the 37 year old lad.

His other initiatives, in tandem with Bharat Matrimony dot com

He is undoubtedly the CEO of the matrimony site. Under his leadership and guidance, there have been other websites and initiatives developed as well. He has developed a great portfolio in the form of Bharat Matrimony Centre, Click Jobs dot com, India property dot com, India list dot com and India automobile dot com.

Some of the top notch e-portals are stated in the introductory paragraph as well. Tambulya is a return gifts site. The bride and the groom receive several unique gifts from the guests who attend the wedding. Why not surprise the guests i.e. friends and loved ones with silver trays, chocolates, dolls and toys? This was the main thought process running in the master mind, before he came up with Tambulya dot com (Tamboolam in Tamil means wedding plate comprising of beetle nuts, beetle leaves, kumkum, chandan and plantains). Even today, when-ever a guest comes and stays in the house; before they leave they are asked to take the tamboolam plate. It is a way of showering your love for the friend or loved one, who has come over to your place. The revered custom is followed in most of the Tamil households, even today.

Murugavel is happily married to wife Deepa. He is said to have met his wife through his own matrimony website. The couple is blessed with a three year old son named Arjun.