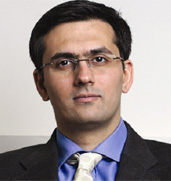 Yatra is focusing on growing middle-class segment and growing fast in this segment as we facilitate their primary requirement that is to make travelling easy...

Co-founder and CEO of the India’s best travel search engine - yatra.com, Dhruv Shringi believes that we are blessed with a multi-generation opportunity to truthfully contour the prospect of our financial system. Yatra.com is an Indian based travel agency based out of Gurgaon, Haryana. You can actually relate the online travel company with travel based search engine, exclusively to cater to the Indian cities, covering major tourist attractions, across the nation. Three main entrepreneurs were behind forming the online company. They are Dhruv Shringi, Manish Amim and Sabina Chopra. The travel company was formed in August 2006.

He believes in hard work and there are no shortcuts to success. His first boss Lalit Khanna has taught him the importance of doing the right things in the right way.

Mr Shringi is a qualified chartered accountant and also holds an MBA degree from INSEAD University.

He started his first business at the age of 19 with the savings of his father. It failed within two years and he says that the he has learnt two important lessons of his life from that failure.

Mr Shringi started his own parent company in the year 2006. However, before he started his own online travel stint, he has had a wonderful career. He has worked with some of the top notch companies, across the world. Let us unveil a couple of them

a) He has worked for more than 6 years with Arthur Anderson, who is a foreign client having his set up in India. He worked at the Delhi office, covering a major part of his career regime.

b) He worked for Ford Motor Company for its Business strategy team based out of London. He was a part of the European Business Turn around team.

c) Between November 2003 and August 2006 he worked as the Group operations director at E Bookers PLC.

d) Finally his own sapling came up, in the form of an online travel biggie.

Yatra.com mainly deals with organizing holiday / tour packages, catering to the travel needs spanning across the length and breadth of the country. Yatra also deals with providing its viewers effective travel info, pricing, availability and reservations for:

The online biggie covers as many as 5000 large cities and even provides travel services to remote rural areas of the nation. Yatra has a dedicated 24/7 customer service team, who are affluent in multiple languages and thus are able to answer your queries all through the year. You can make your travel bookings online or through the phone any time of the year, without any hassles, what so ever.

Major developments and acquisitions made by yatra.com

It has quite a lot of major acquisitions adding to the credit. These are

Global Distribution System, a part and parcel of Magicrooms.in

Indian events and entertainment portal namely buzzintown.com, for an undisclosed amount in the year July 2012.

Yatra.com currently has acquired a complete 100% stakes on travelguru.com

Yatra.com reached a rendezvous milestone in the year 2014, especially in the cricketing fraternity. It was announced that yatra.com remain the official travel partner of IPL cricket team, Rajasthan Royals.

His journey with yatra.com

Here we have presented some of the excerpts from the interview posed to Dhruv Shringi. This gives you an insight on how he got the idea of starting an online travel agency in India and a lot more of his future plans.

What drove Mr Shringi to start a company that too a travel company in India, after working in Europe for 8 years?

He replies, that he saw India as a booming market for travel and tourism, mainly because a lot of travel spots are left uninhabited in India. A lot of Indians are tempted to discover lands abroad rather than discovering their own homeland. It was shocking when the team at Travelyatra.com discovered 44, 29,915 tourists during 2006 and the online biggie was making head-way to increase the number of arrivals to 10 million like that of Bangkok or Thailand. The tourism revolution in India is typical to the revolution in the US, way back in ’60 s and ’70 s and there are fresh locations in India, still yet to be discovered.

And one can see a substantial 40-50% net growth in a tech savvy firm. In the present tech savvy world, quite a lot of customers are confidently coming forward to have their tickets and travel itinerary booked online.

A decade back, quite a lot of people were sceptical to make their bookings online as they thought their credit card and critical banking details would not be safe in the cyber space. This perception has changed a great deal in today’s e-commerce world.

Quite a lot of FMCG (Fast Moving Consumer Group) companies are investing in yatra.com, which is mainly segmented at providing world class travel amenities especially to the middle class. These include Reliance Venture Asset Management, Web 18 of TV 18 group (a joint venture between NBC universal and Network 18), Norwest Venture Partners and Intel group. The company is covering more than 150 metros and other smaller towns and rural groups.

With yatra.com, it is a one stop shop executed to take care of all your travel requirements. You don’t have to browse 1000 websites under the sun to have your travel tickets booked. The flight booking, hotel, food and sight-seeing is taken care of by yatra.com, itself. An average ticket of a high class tour plan costs you as affordable as Rupees 3,500 per person.

He plans to expand cyber space and re-invent tourism to offline media such as business magazines, television and channel migration. However it is online flight bookings and holiday packages that provide the highest sales volume.

The 41 year old young entrepreneur has a long way to go, to expand the horizons of the tourism world.