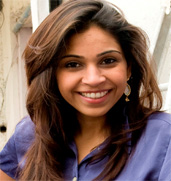 Dynamic and energetic Anisha Singh is the CEO and the co-founder of Mydala.com. The Company was started in the year 2009 and you can visit her site on www.mydala.com. The e-site has one of the largest chains of coupons in the country. It gives you great discounts on beauty parlours, restaurants, gym memberships and a lot more. Mydala.com is an online portal which has a tie up with international brands across the world. You can get fabulous discounts on home-made chocolates, branded western wear, on properties, holiday packages and a lot more.

A person, who loves what she does, believes that her biggest strength is Persistence. A person who started her career by babysitting for about $14 an hour, this NRI moved ahead to become one of the youngest CEOs at the age of 26.

She follows a success mantra of constantly trying to succeed and this is the mantra which has helped her come through some of the most difficult stages in her life.

A gadget freak, she uses a number of apps during her daily routine and also to keep in touch with her family.

A true entrepreneur and a doting mother, she says she never leaves home without hugging her daughter.

With an intact founding team and negligible customer complaints, Mydala.com is indeed emerging as one of the country’s largest mobile coupon portal and it still has a long way to go.

Anisha Singh is an NRI (Non Resident Indian) born and brought up in the US. Anisha has a Master’s Degree in Political Communication. Added to that, she has also got an MBA degree in the field of Information Systems from an American University in Washington DC. She aspires playing Snookers representing India. She is a yoga instructor and a professional cake decorator. This is apart from, being an entrepreneur. This way, the young CEO has quite a lot of feathers to her hat.

• Anisha started off, and began her career with Capitol Hill in sync with Clinton’s administration. The initiative was towards helping women entrepreneurs raise money for conducting small scale businesses.

• She then moved to Centra Software Co, in Boston before returning to India.

• Upon arrival to India, she set up Kinis software solutions. She was instrumental in providing customized e-learning solutions to fortune 500 companies.

• Then Mydala.com happened in the year 2009. The groupon company helps customers as well as merchant partners to groom in the economy.

Her role in shaping up mydala.com

In an economy which is running through sessions of boom and inherent fears of losing out to recession, there is something considerable that needs to be done, to make people’s lives better. Everyone loves enjoying life. When you offer recreational deals like having whole lot of spa services, for a song or having restaurant deals at 40% discounts, who would not be attracted to take up on these deals? The online portal gets clients and international forums across the globe, to provide these exciting deals covering most of the big cities in the country.

She was able to expand her business big time, by making use of the power of social media like Face Book and Twitter. Her company initially focused on building up ads and campaign on Face Book. A lot of subscriptions and membership programs were procured, this way.

Mydala has in fact got a separate social media team, which focuses on building relationships with users. The team was thus able to receive views on what consumers feel about deals and also gets feed-back on how customer relationships can be made better.

Mydala connects merchants and consumers through channels on the Web, WAP and mobile applications. If you have phones having Vodafone, Airtel, Aircel and Tata Docomo connectivity, you will be able to do your online shopping with mydala.com. This is how the online portal connects to mobile users across the nation. By 2013, mydala had bagged in, as many as 100,000 merchants covering more than 152 cities just in India. The online conglomerate was able to reach more than 100 million users through internet, mobile phones and TV platforms.

Mydala are big believers of the fact that social networking and media, when leveraged in the right way, can benefit the business immensely and also bring about a social awareness on the kind of global brands companies come up with. Online shopping has reached such a phenomenal growth, these days. It is catching up with the current trends in the market, that Anisha is able to give you sophisticated deals on a platter. Not many online coupon companies give you a flat 50% discount on real-estate deals, which mydala.com gives its customers.

Other lucrative offers given by the online portal are that you can sign up for a free one month subscription by just paying a specified sum. You can view and obtain deals absolutely free of charge. You need to pay the actual amount of the deal at the merchant establishment itself. You can like the Face book page on mydala.com and you can get better discounts on products and services. These are the kind of unique offers members get, thanks to the innovative thinking of Ms Anisha Singh and her team.

Her team vigorously tracks social media and gets reviews and feedback from consumers. A true and a genuine feedback from consumer is what give the inspiration and motivation to perform still better. When you start a firm and work on a customer centric approach, the business automatically grows. “We bargain and you gain” is the mantra of her team at mydala.com.

In fact, Mydala had also partnered with Yash Raj Films to promote the movie, Ladies vs Ricky Bahl in the year 2011. The online portal was also a leading sponsor to promote two other Bollywood flicks namely Barfi and Heroine.

Innovations made by the trendy online portal

Mydala launched a scheme in the year 2011 in sync with Deal Hunter. The facility allows you to view sale offers, within your vicinity. The mobile application as started my Mydala, also lets you access deals and offers based on your buying patterns and the area where you stay.

She connects to her family in the US through Face Time and Skype. She also travels constantly to the US in order to keep her family ticking. She lives in the US and travels to India, on business purposes. Her husband is a venture capitalist and the couple is blessed with a cute little daughter. The young lady entrepreneur has a long way to go!