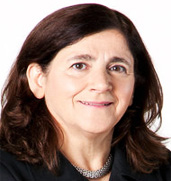 Launcher of the brand redesign of flagship newspaper, Gracia C Martore is a woman entrepreneur aimed at captivating advantage of Gannett's profound relationships with patrons and advertisers in confined markets across the country. She replaced the , Craig Dubow on the 6th of October 2011. She also serves on the Board of Directors of FM Global and MeadWestvaco Corporation.

Gracia C Martore is known to everyone as a person who puts her head down and has the complete focus on her job. She is a friendly yet shy person who always looks ahead to new opportunities and responsibilities.

Gracia C Martore is certainly making the difference as the CEO of Gannet and that was what she hoped for. She believes she was educated to do so. Martore is also paid salary, bonus, stock options and also deferred compensation.

Martore has earned double degrees from two majors namely History and Political Science. She passed out from Wellesley College in the year 1973. While she was studying at the Wellesley College, she was applauded for her academic excellence. Her estimated is about 8 million dollars.

Gracia C Martore completed her graduation program in the year 1973. It is apparently mentioned on her career blog, that she has had 12 years of active work experience in the banking sector. Not many references are given on the companies she worked with, prior to joining Gannett in the year 1985. She joined Gannett Co Inc. as an Assistant Treasurer. Then in the year 1993, she went on to become the Vice President of the Treasury group. She added additional responsibilities to her kitty, in terms of taking up investor relations duties. This was in the year 1995. During the year 1998, she became of the Treasury Group. And she was also the Vice President of the Investor team.

This marks her thorough career spark from the day; she joined America’s biggest newspaper company up until now.

Her journey with Gannett

Gracia became the CEO of Gannett with effect from 06th October 2011. She is a very straight forward person and committed when it takes to making important decisions on behalf of the company. In her entire career span of 26 years, she knows what is in the best interest of the company and what is not.

From her career spark as stated in the above paragraph, you can easily make out as to how she has risen up the corporate ladder step by step to become the CEO. Her rewards and recognition in terms of Forbes stating her as one of the 100 most powerful women in the world testifies the magnitude of achievements made by her individually as well as a team.

Not to underestimate the fact that she is one of the top 17 women in the world, who have made it to the ultimate, by bagging the post of a CEO of a top company.

We are going to have a look at some of the business values followed my Martore, to make her what she is today.

She used to focus on the job at hand

No matter how simple or how tedious the job was, the moment she had expertise in an area of operation, she used to plunge in. She assumed newer responsibilities and took up newer challenges which helped her in . Youngsters need to take her as a live example to come up step by step. The is an energetic person, when it comes to working for the company. She is a people’s person, all together.

The all powerful lady feels true merit takes you the pedestal of success, no matter if you are a man or a woman. It doesn’t matter you have all the degrees in the but you would be regarded as a dumb if you are not capable of making the right decisions at the right time.

The lady untiringly took up responsibilities and made major moves in the financial domain of the media company named Gannett and was least perturbed by the fact that she is a woman and swayed the wrong perception that women are not capable of calling shots, out of the window.

When she joined a global firm named Gannett, she looked at who were behind contributing to the company’s overall responsibilities and the senior positions held by them. She worked hard towards assuming tedious responsibilities and achieved fantastic results. She followed up with amazing marketing and strategies for the company and made it big.

Whatever people comment on you, just does not bother. A don’t care attitude of Gracia was what made her establish a niche for herself in the industry. After you know what you are capable of achieving, no matter what the other person thinks or feels about you.

Martore is married to Joseph or Joe Martore as he is known and the couple has two children. She was reared in her early days in the Boston suburb of Belmont, Mass in their family house which was built by her father. Her father died when she was just in her teens.

Joe Martore was also named as the “2012 Contractor of the Year” at the 10th Anniversary Greater Washington GOVERNMENT Contractor Awards.