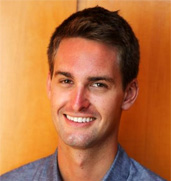 With diversified experience, influential approach in reaching across departments & unifying cross functional teams towards a common goal, Evan Thomas Spiegel is an American entrepreneur who was instrumental in starting up a mobile application named Snapchat. Currently, Spiegel is the CEO of Snapchat. He is known for his style and he has joined his father to work jointly with him on the Snapchat project.

Evan is filled with contagious passion for excellence, a talent for resourceful business solutions and a capacity for motivational leadership. He is an Ideal combination of managerial and analytical skill deft at exploring new business opportunities through systematic prospecting to generate business enquiries. Snapchat is one of the most popular yet non earning applications which as per the statistics, is used mostly by women.

Evan T Spiegel was born on the 4th of June 1990 and he is a 24 years old young entrepreneur for a global biggie. The whiz kid was born to parents namely Melissa Ann Thomas and John W Spiegel who were both lawyers. The young entrepreneur was born and brought up in Los Angeles, California. He studied at the Crossroads school for Arts and Sciences in Santa Monica and subsequently continued his studies at the Stanford University.

While he was just in high school, he took up an extra initiative to learn web designing and he took the classes from Otis College of Arts and Design. He did a summer intern ship program at Art Center College for Design in Pasadena and also at Red bulls for sales. He however started Snapchat, even before completion of his formal degree program.

He concentrated on a mobile application known as Snapchat. It was an application meant to make college life easier. He proposed Snap chat as a class project. He founded the internet group along with two other partners namely Reggie Brown and Robert Murphy. He went on to start his own internet company, shortly before the completion of his actual degree at Stanford University. So he did not get opportunities to work full time with any other company as such.

How it all started off?

As we all know, Evan Spiegel is the co-founder and CEO of a photo messaging company known as Snapchat. As he was persuading his formal education at Stanford University, he was subsequently taking up classes on designing. Evan met Murphy, who was two years ahead of him in college. Murphy was persuading Mathematics as his main stream of study. They both met each other at the frat house in Kappa Sigma.

Both of them eventually developed an app that was capable of sending photo messages with a timer, and their contacts could be removed in less than 10 seconds or so. This application which the teenage guys developed just for fun actually was re-branded as Snapchat. This was during the year 2011. Now the very same application is used by more than 100 million people monthly, for free. Evan has actually struck deals with Networking site named Face book, valuing the Snapchat Company at US $ 10 billion. And Murphy and Evan have a 15% ownership on the entire stakes.

Apparently there was this third guy, named Reggie Brown, who also claimed ownership of this application, and he apparently filed a case against Evan and Murphy for not sharing profit deals amongst all the three. This settlement took place in the year 2014, wherein the deal was settled amicably among the three guys.

Spiegel sees a fantastic future for Snapchat. Today, he is worth $1.5 billion. To achieve a feat of this kind that too at the age of 24, is something really remarkable.

His journey with Snapchat

Evan Spiegel has made tremendous efforts in making his company Snapchat, a part of the billion dollar club. This is the latest development as registered by the photo messaging company, as such.

Snapchat and Square have teamed up to start a brand new service for members. You can transfer money from one account to another, using Snapchat messaging service. The service is incredibly effective and quite simple to use. Both the parties need to have active bank accounts. Once you enter your debit card number, the payment details are securely managed by the Square team. And the money is quickly transferred to your friend’s bank account.

Just open your chat and type in the dollar sign and enter the money that you wish to transfer, say $ 25 and press the green button. The amount is automatically transferred to the beneficiary’s account.

To celebrate the launch of the money transfer scheme by Snap chat, Evan Spiegel organized an ad theme, wherein teen stars were dressed in suits with dollar signs and they were made to dance in showers of cash.

But Snapchat has had its share of security breaches, like lot of user accounts were hacked and their telephone numbers were scraped out. However, these issues are being looked into, by the firm as such.

When a couple of hackers and trade insiders, leaked critical and vital information of Snap chat and they were released by Sony Pictures, he has written a letter on why the employees, confidential trustees and techies associated with the company, need to align themselves to working honestly and diligently with the company and why secrets need to be retained. He says “We will continue to keep doing things which we have done before and aim to achieve results with ten times efficiency because this is simply not the world we exactly want to live in”.

These are words of the techno exponent and youngsters can take his words seriously. The team wants to diversify business with exciting themes for community, web users and friends.

He wants to create the kind of niche Mark Zuckerberg and Steve Jobs created in developing FB and Apple, respectively, which is fair enough for the creative genius Spiegel. We wish the young lad good luck in all his endeavors and become successful on the professional venture, which he has taken up, in a big big way!

On the personal front, Evan Spiegel faced quite a lot of criticisms about his pathetic comments made on women. He exchanged e-mails which had some vulgar and obnoxious statements on women. This act of his was condemned upon, as the e-mails he shared among his fellow mates during his earlier days at Stanford, were made public.

However, he says he realized his mistakes and the e-mails that he had shared were meant for fun and he has got quite a different perception on women than the kind of impression portrayed, through the mails.

Evan was in news for the Email hacking which has happened recently .The hard work is lost when a speck of dust falls on your personal image. So the creative genius needs to keep his antics apart and concentrate on delivering high end products related to Snapchat.