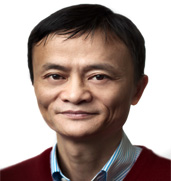 In carrying out e-commerce, the most important thing is to keep doing what you are doing right now with passion, to keep it up…

Jack Ma is a Chinese entrepreneur who is the founder and the Executive Chairman of Alibaba group. The firm is an internet based company. He is the first person from Mainland China to have appeared on the cover page of Forbes magazine. Jack Ma is also called as the Steve Jobs of China. He is very well known for his business methodology and his leadership qualities.

He is infact the richest man in China and the 18th richest person in the world with a total net assets value of US $29.7 billion as per Bloomberg Billionaires Index.

Jack Ma always focused on the culture as well as education of the people. He was well known for his fluency in English and also his leadership style. He was responsive and is seen to be a leader who is quite interested and well spoken to his subordinates. He is also a person of transparent nature. He speaks to people about their problems and also tries to provide the needed solution for the same. Being too friendly, emotional and over confident about his employees are considered to be his weaknesses.

One of the most effective qualities of Jack Ma is the quality of a leader who follows a strategic planning. He always followed a goal oriented plan and asked his employees to follow his plan to achieve success.

Jack Ma, otherwise known as Ma Yun was born on the 10th of September 1964 and currently is 50 years old. His parents were musician story tellers. But he had a vision of learning to speak English. He rode his bike for 45 minutes early in the morning. He wanted to go to a nearby hotel, to pick foreigners from there and drop them wherever they wanted to. He thought this way, he can get a chance to speak with them in English and improve his vocabulary thereon.

He finally graduated from Hangzhou Normal University with a Bachelor’s degree in English. He completed his further studies from Beijing based Cheung Kong Graduate School of Business. He passed out in the year 2006.

During the year 1995 he started China’s version of Yellow Pages. This was believed to be China’s first internet based company. In the year 1998-1999, saw him as a head of Information Technology Company established by China International E-Commerce Center. The company belonged to Ministry of Foreign Trade and Economic Co-operation. And in 1999, Alibaba finally established. And there was absolutely no looking back for the 50 year old energetic entrepreneur.

He was actually rejected in one dozen jobs to get hired as a local English teacher before he went all out to start his business venture. And today he stands as the richest guy in China. His story on how it all started off and how he went on to make Alibaba group # 1 Internet Company in China is what all of you are going to look at. He is a true rag to riches man.

Alibaba group, how it all started off

He was creating websites for Chinese companies with the help of his friends from US. He invited his friends’ home once the internet connection was up and running. The dial up modem was however so damn slow. He and his friends played poker, watched TV and drank glasses of wine cum vodka, but the web page would never open. This inspired him to start a high speed internet company in the year 1999 and he made Alibaba IPO to touch the biggest ever milestone, even unimaginable to NYSE (New York Stock Exchange). The internet biggie is worth more than $40 billion. This highly energetic 50 year old business icon has indeed a long way to go!

His journey with Alibaba

There is another interesting piece of info he has shared with all of us before he started Alibaba group. He worked for a Chinese translator company when he typed in the word ‘beer’, but there was no word to match up with the Chinese equivalent of the word ‘beer’. This was when he decided to start a high speed internet connection company in mainland China.

The online site named ‘Alibaba’ started taking product listings directly from exporters, who could post their services over the net. Soon the company started receiving investments from other global leaders as well. Alibaba received $5 million from Goldman Sachs and $20 million from Softbank (a Japanese telecom company, which invests in other technology companies). All the big action needed to build up the company in a big way happened by October 1999.

He is a great entertainer and people gather in huge numbers to listen to his speech. While the company was doing well in business, he gave a can of ginger beer to each and every employee to pep their energy levels up. Yahoo then came up with a big proposal during the year 2005. It wanted to invest $10 billion in Alibaba IPO alone in exchange for a 40% stake in the company. Alibaba was trying to beat e bay in China. And getting $10 billion from Yahoo definitely was a boost up to the overall state of affairs of the company, as such.

Ma stepped down from his position as CEO in 2013 to remain as the Executive Chairman of the board. Alibaba went public on September 19th 2013. In a meeting with a CNN spokesperson he said, “Today what we have got is not money, it is the trust from the people”. These are words of inspiration; the younger generation can look forward to.

The company total worth is $150 billion was the largest offering even in the history of New York Stock Exchange (NYSE). This made Ma the richest man in China, with an estimated worth of $25 billion.

The employees of Alibaba threw a grand party at company’s Hangzhou headquarters to celebrate the grand event and this was when he wanted to contribute significantly towards doing something substantial for the economy, as such. He wanted to preserve the environment and so he banned export of shark fins through his site. He has contributed quite a lot of money towards preserving the environment of Chinese economy.

Jack Ma is married to Zhang Ying and the couple has a daughter and a son. His son is currently persuading his higher studies at the University of California in Berkley.